Tuesday 21st February.   It was just under 2km from Allan’s place to the top of the Great Dividing Range nearly a kilometer (well 850m anyway) above the ocean that I had left down at Moruya. Lyn and Warren have been playing with numbers like how many paddle strokes, or bends or steps have been in the trip and I wonder how much energy is required to lift 70kg 850m up in the air, or even how many end of day beers it required.

We were met at the outskirts of Bungendore which Lyn will tell you about but Mel is a truly remarkable woman with stories about all sorts of places she has worked in Australia. After Mel bought us lunch I was feeling pretty good and managed to get to the top of the hill at the ACT boundary with 23.7km on the clock.

A free bed and feed was on offer at Tim and Roz’s where I had a quick snooze before an entertaining and very informative evening. Their place is my idea of heaven except it is too far from the beach.

Wednesday 22nd February         After a cool night the morning warmed up quickly as we departed from the ACT border sign, Lyn to do some food shopping and me to just walk like every day. The Mobic tablets that I have been taking each night now really do the trick.

Officer Tim turned up twice during the morning to make sure I was OK. People ring him to tell him about the bloke on the road who might get himself run over but Tim checks it out and it is all OK. Anyway, I am not really his problem anymore he reckons as I am in the ACT. I love the attitude of these guys – helpful, friendly and doing a great job.

After the regular interview for the Sustainability Hour with Mik and Tony in Geelong it wasn’t long before I reached the steep hill down into Queanbeyan. A big surprise was waiting near the bottom, Brian and Fran, our neighbours from Ballina had arrived. My only complaint is that they should have told us so that I could wait at the top of the hill for Brian to walk up to me.

Brian walked with me to the BP servo on Yass Rd where we loaded Old Yella onto the ute and adjourned to the Royal for a couple of cold mid-strengths. No more big hills for Old Yella. Ever! 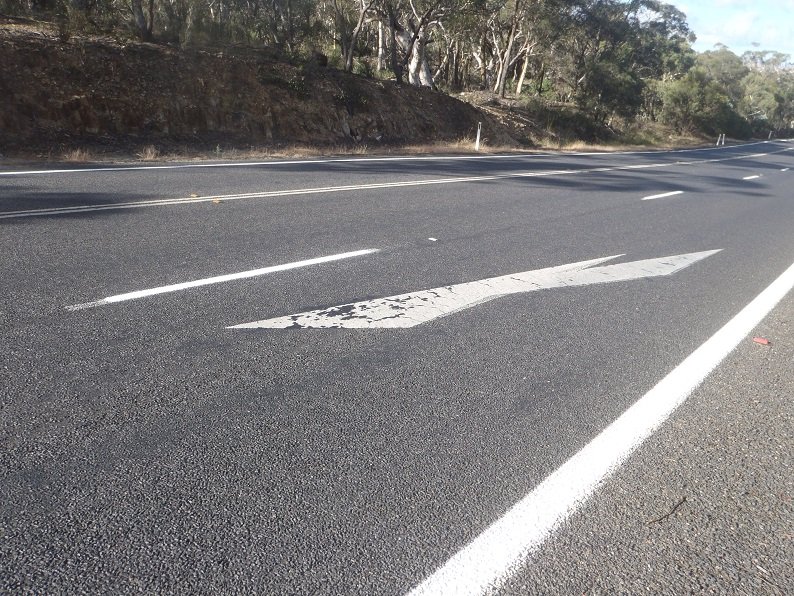 A different view of a lane arrow 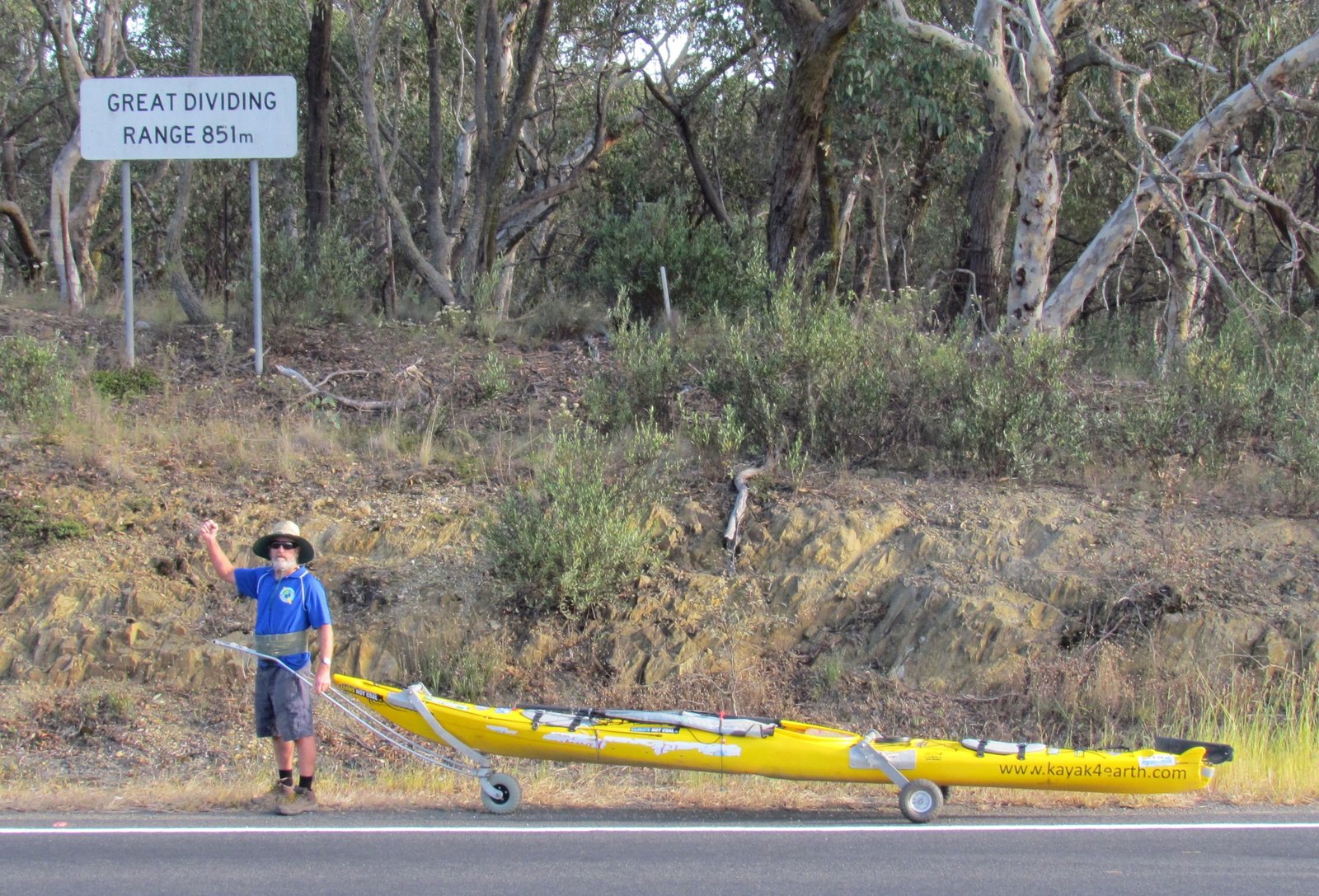 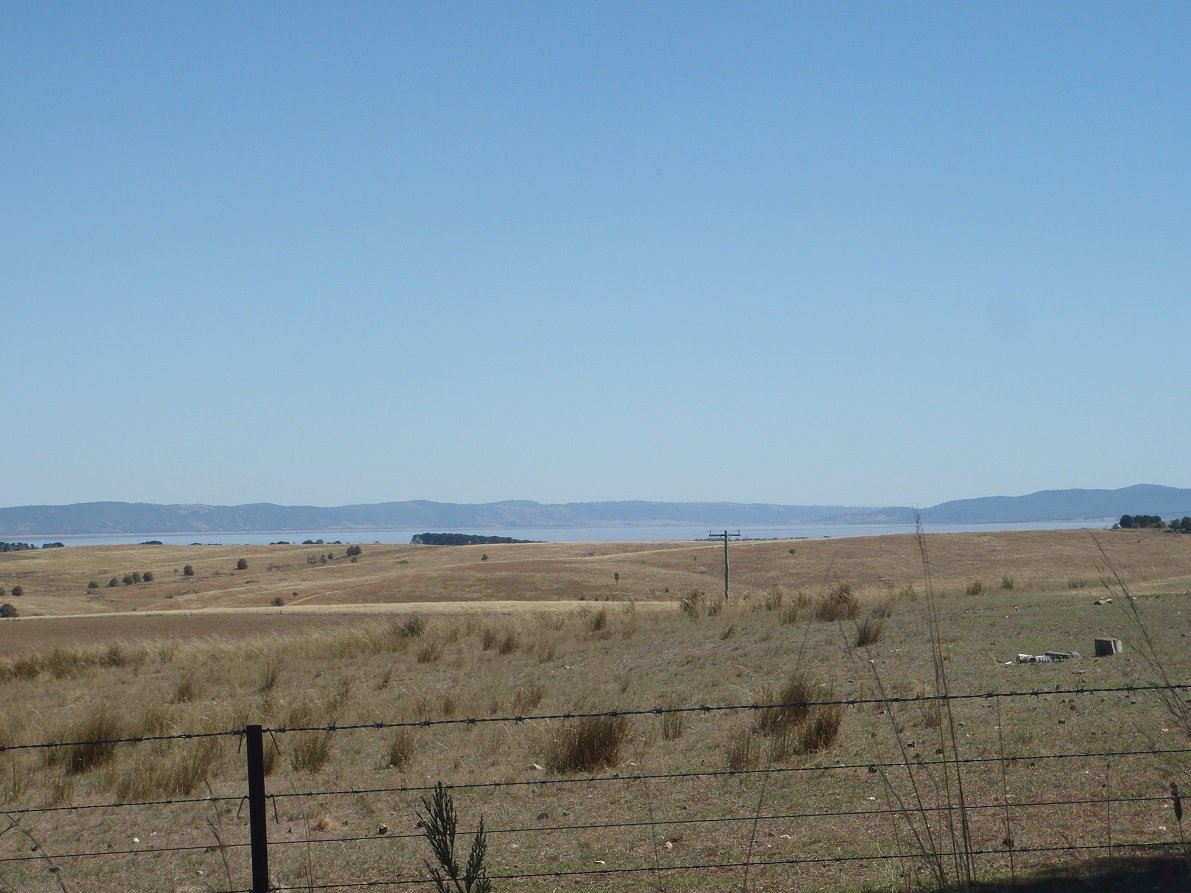 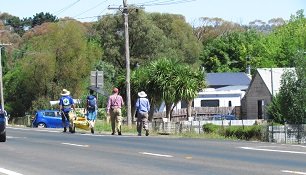 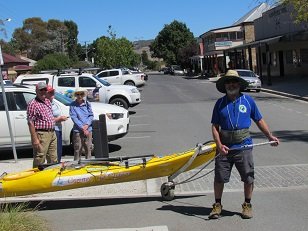 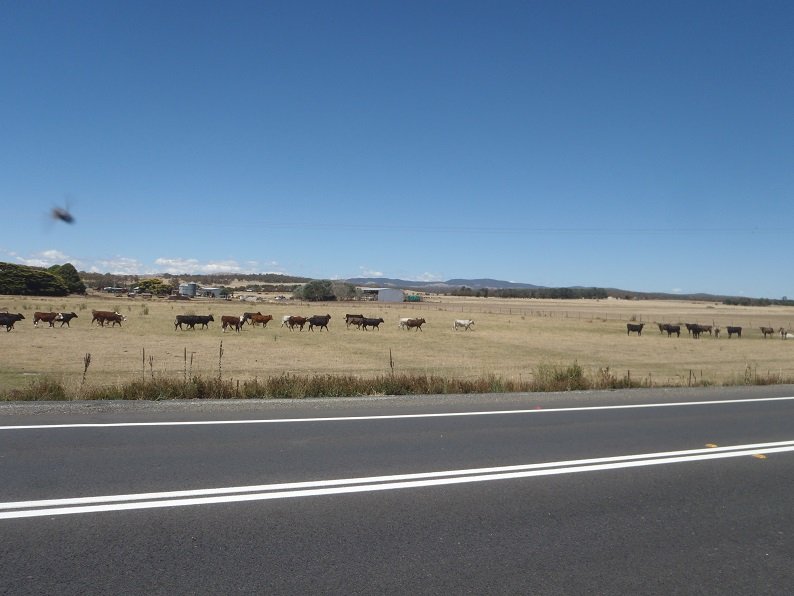 Rounding up cattle from the other side of the road. Note the grasshopper in the picture. They follow the kayak as well. 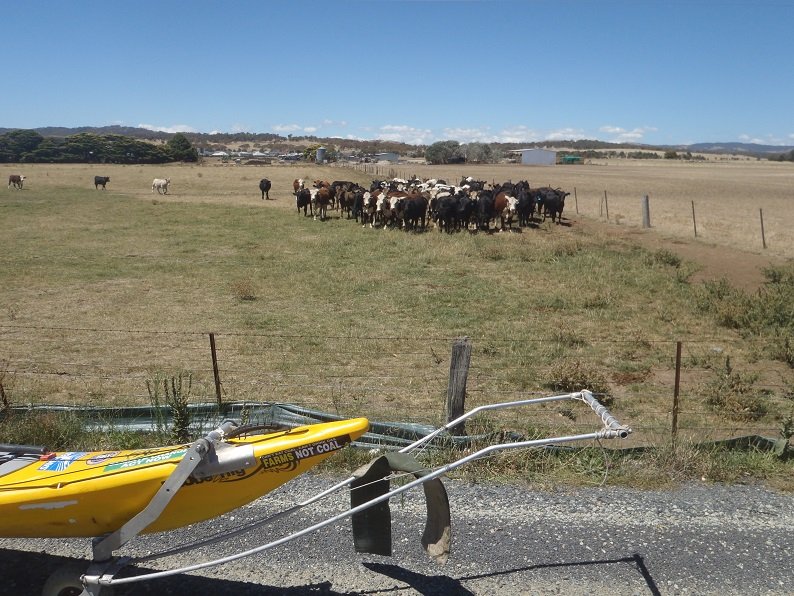 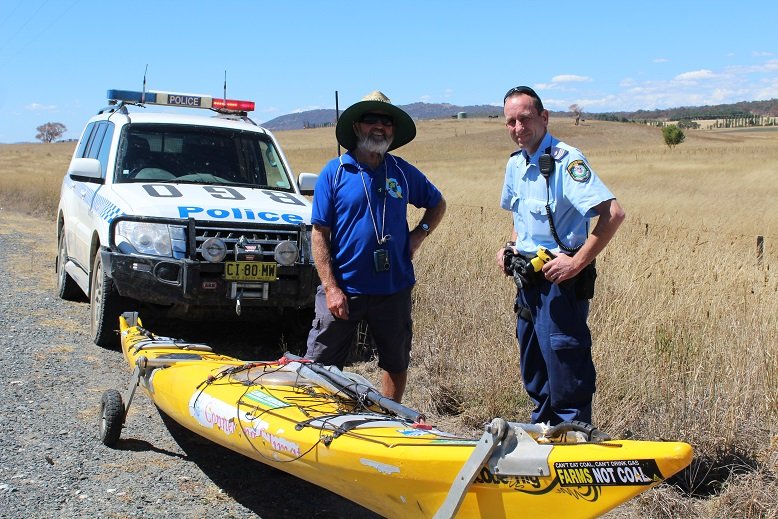 Wrong. He didn’t book me for speeding. This is Officer Tim and he came out to see if we were OK. 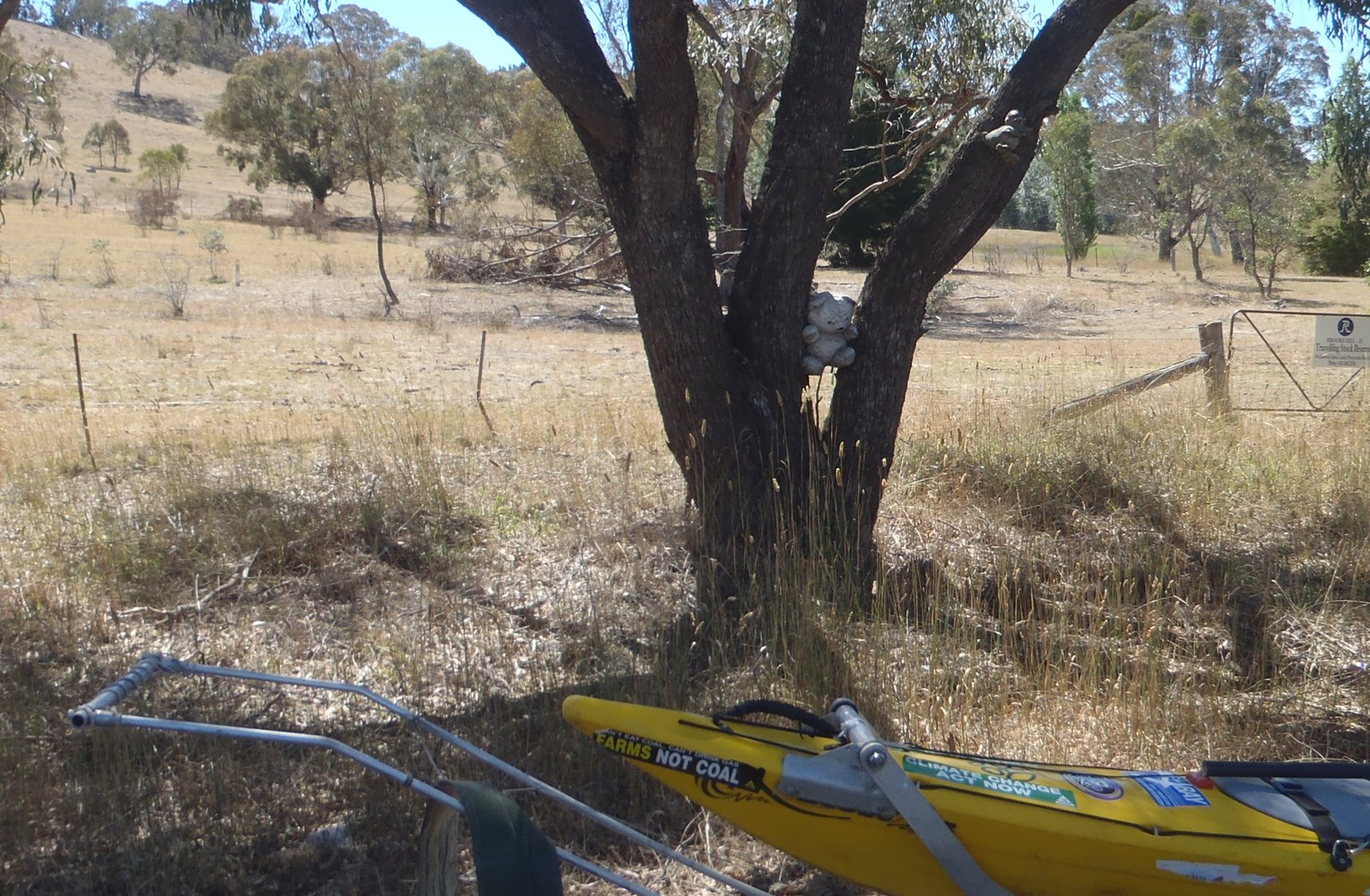 Note the bear in the tree. They are everywhere along this section. 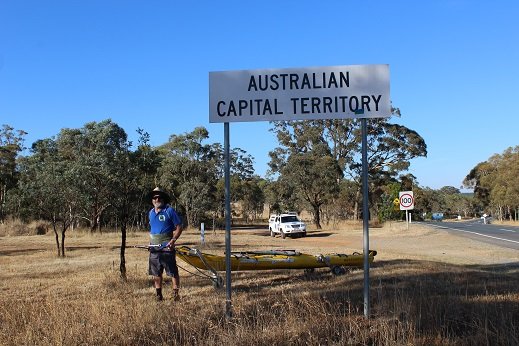 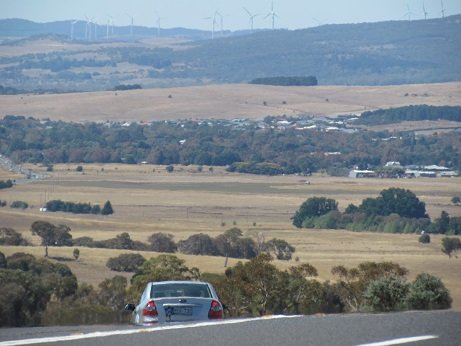 1km into the UK and I saw wind turbines and continued to see hundreds of them, ditto France. Took 1300km to see one in Australia 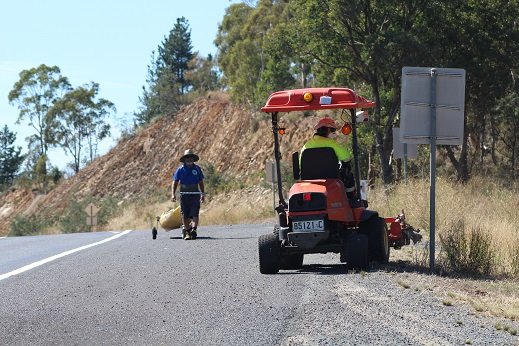 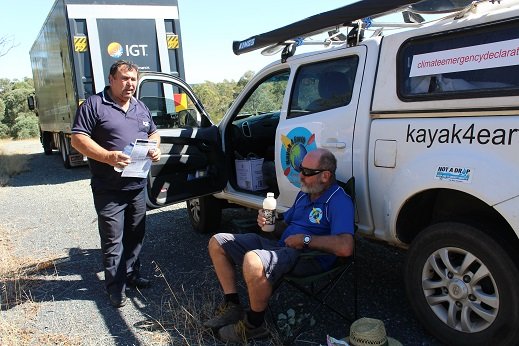 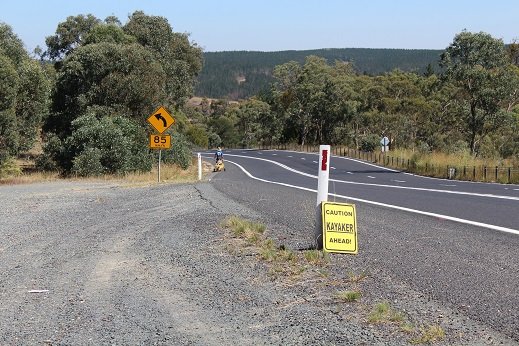 LYN  Tuesday 21st February        We finally said goodbye to the Royal Mail Hotel in Braidwood this morning. And headed out to pick up Old Yella from Allan Pierce’s property and head towards Bungendore. Steve started walking at 8.10am, it wasn’t long before he reached the height of 851 metres on the Great Dividing Range at 8.35am. We took some photos at this point and then continued on to Bungendore.

Over the past few days we have talked to Melinda Hillary from Bungendore about our trip and what it’s all about. She is well aware of all the issues surrounding climate change and the problems we will face in the future. She arranged to meet us with a few friends at the edge of Bungendore. We met up with Melinda, Stephanie & Marcel Jud-Brettinghan and Noala McDonald; three of them then accompanied Steve on the walk into town. After photos were taken in the centre of town, Melinda generously took Steve and I out for lunch at the ‘Cafe Wood Works.’

Attached to the cafe is the most wonderful woodwork gallery, with exquisite pieces of furniture, if you’re ever passing through Bungendore it’s worth stopping to have a look.

Steve had stopped for a break 5km out of Bungendore when a police car pulled up. He said he was checking Steve was ok, he had seen him the day before out of Braidwood. Officer Tim from Bungendore had a chat about what Steve was doing wished him well and then went on his way. I of course pulled out the trusty Canon and got a shot of Steve with Officer Tim.

Back on the road heading toward Queanbeyan this time. After a couple of hills Steve reached the A.C.T. border at 3.10pm, this seemed a good spot to finish for the day.

Kayak loaded we drove to Guy’s Cross where we were staying for the night. Tim Booth and his partner Ros had offered us the use of the cabin on their property for the night. They also invited us to join them for dinner. Tim has been here for 30 years and told us about the property, which is named after his grandfather. It’s an interesting property with picturesque views. They have 600 olive trees and produce their own oil, they grow native grass species and Tim harvests the seeds and sells it for projects such as mine rehabilitation, conservation, local councils and Landcare. They even harvest some 4000 Christmas trees annually. Ros is an artist and has an interesting yurt studio on the property, some of her paintings adorned the walls and depict the area. We had a very enjoyable evening swapping stories. You can find Guys Cross Farm Cottage on Air B & B we definitely recommend it as a great place to stay if you’re ever in the area.

Wednesday 22nd February      We said our goodbyes to Tim & Ros and thanked them for their generosity. We were back at the A.C.T. border ready to hit the road to Queanbeyan at 8.30am, not far to go now; it is approximately 17 km to Queanbeyan from here, and then another 10km to Canberra where Steve will return Old Yella to the water in the Molonglo River for the final 6km to Lake Burley Griffin on Saturday and the official welcome and celebration of the completion of his trip. But for now it’s back on the road to conquer a few more hills.

I drove ahead to Queanbeyan to pick up a few supplies. When I returned Steve told me that officer Tim had visited again. He had explained that when a member of the public rings the station with concerns about the safety of this man dragging a kayak along the highway they have to come out and check. They had a chat and then Officer Tim said cheerily well now your officially in the A.C.T. you’re no longer my/NSW police’s problem.

Back on the road Steve has to carefully negotiate the men at work signs along the road as they mow and clean up the roadside. After the next hill Steve takes a break and explains that he will have to walk on the opposite side to usual as there is a barrier on the oncoming traffic side and no room for him to walk. So we place the sign, CAUTION KAYAKER AHEAD just over the rise so the traffic will see it before they drive down the hill and encounter Steve. This negotiated, Steve stops on top of the next hill to do a radio interview, hoping reception here will be at a premium. Who should stop but Officer Tim, Steve mentioned at their last chat that he had a tricky spot ahead coming down the hill, and as we were stopped Officer Tim thought this was the spot and offered his assistance with the traffic if we needed it. However we had already past that spot. We would like to sincerely thank Officer Tim and the NSW police for their assistance and concern.

I went ahead and waited at the edge of Queanbeyan for Steve’s arrival. I had a call from our friends in Ballina, Fran and Brian. ‘Hi Lyn, where are you?  We’re in Queanbeyan.’ What a lovely surprise. They come and join me and then Brian walks up the hill to meet Steve and walk with him into Queanbeyan. There is now only a very short walk for the day and Brian continues with Steve while I go ahead to wait for them at the spot. WELL there is some discrepancy between Steve and I about the description of the rendezvous. I thought he said the BP garage on the next roundabout but he says he said ‘turn right at the roundabout to go to the BP service station!’

All ended well and at the end of the day we enjoyed a coldie in the Royal Hotel in Queanbeyan with our friends.