Troubles last night with the GoPro. Could not get it to turn on even with the charger. Not sure if me or camera so Tuesday will go to a camera shop. Not good news from USA. Kayak now due Houston 18th Feb and need to sort out extra payments. Would have been in a lot of trouble without Klaas’s son Nick. He has been a godsend.

Got ready for a big day, gloves on taped up hands, tied paddle to front etc. Arrived at Stanwell Park to find big seas and 20 knots of sou’easter. Reckoned it was 50:50 whether I could get out or end up strewn along the beach, so waited 2hrs for surf club blokes. They suggested try Coalcliff which I didn’t realise was there so after a quick trip down to inspect we loaded the kayak back onto the ute and headed there.

A bloke called Rob said he would help me get it into the water. I need to get the skirt over the cockpit when I’m on the sand and then knuckle push to the water, but I also need someone at the front to keep the nose into the waves otherwise I get washed sideways. Rob was really good and we agreed on the timing when it was time to go.

Took off over rocks just under the water, bided my time with small waves and then bit the bullet and took off at full speed. Klaas got some shots and I have since shown him how to focus. 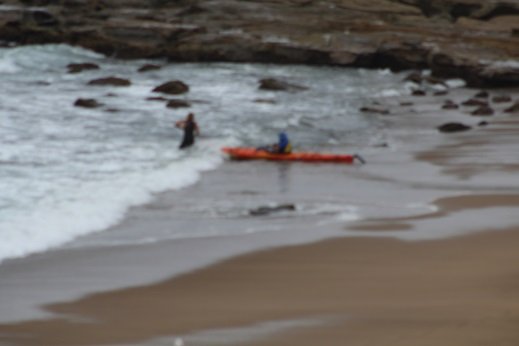 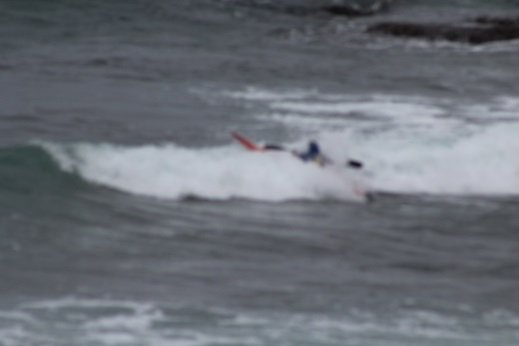 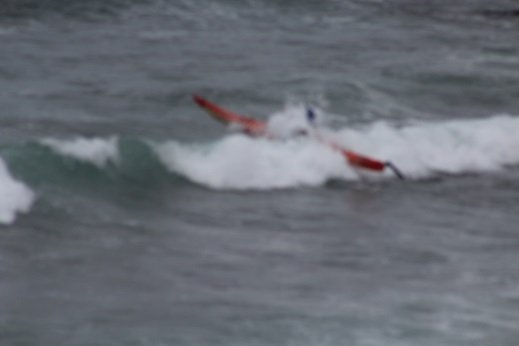 That was close. The one behind it was even closer. The kayak is nearly 6m long so that’s 3m out of the water. 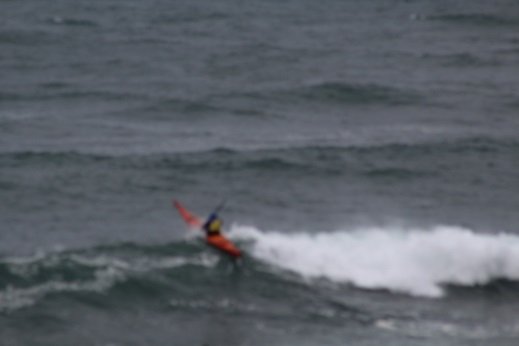 Made it and all good. You can just see my head and the paddle 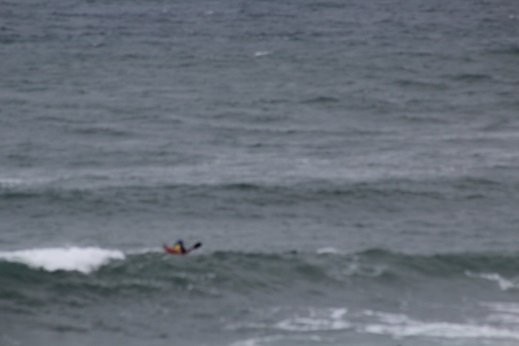 After turning left the wind was over my right shoulder although the swell was coming from the side. It was pretty good for an hour or so. There were some great runners that would send me scooting along, sometimes up a wave and down the back. Top speed was 16.8km/hr. I defy anyone to pick a runner just by looking. I certainly can’t. It is a matter of feeling when it is on and then using it. One of the best paddles I have had was with Denise and Raz in the OC4. None of the crap about here comes one, we all just felt it and went with the lifts.

The wind came round to side on and then it got really wet and messy. Swells were about 2m, which looks like a mountain from a kayak, but there were other peaks like 1m high anthills all over them. On top of that the odd breaker would come through from the side at chest height. I did a lot of feathering with the right blade to stay upright.

Of course all of this fills the kayak up with water because it runs in down the lifejacket and any other opening it can find. I had to stop and bale every 20mins or so but did manage drinks and pee stops albeit very quick ones. With the spray skirt off things are very exposed.

The wind picked up and things got very bumpy indeed. No chance for niceties like using the pee bottle, it was just do it and bugger the consequences. Bit like peeing in a wetsuit though I suppose.

Eventually I came to a deserted beach. At the end of it I was about 200m from the cliffs which was at least 300m closer than intended. Not sure how that happened but it was probably a current, so I paddled hard to get back out to sea.

The cliffs are not straight so every time I would get close to the last one I could see I would hope that the next one was set back a bit. That would mean I could start tracking more north than north east. After about four or five disappointments the coastline did turn and the wind went back to coming over my right shoulder. It was still too scary to lift the skirt except for the briefest of baling flurries.

A big plane materialised in the clouds ahead so I knew the airport was not too far away, which meant Cronulla was even closer. Kurnell was just visible between rain squalls, but it took ages to find Cronulla tucked well to the left. I came round the corner inside a bombie, headed across the bay that became calmer the further in I got and started to relax. Phew. Glad that was over.

GPS said 32km at Gunnamatta Park. Time 3hrs 50 minutes. Lucky I had gloved and taped up. There had been plenty of full strength efforts. Klaas wrote the following while he waited.

Klaas: Now I know you are mad Stevie boy. Bloody two meter waves, bashing the beach at Stanwell Park and you wanted to launch a kayak. I proffered the suggestion you might wait one or two days. But no, you had the bit between your teeth and estimated your survival in those conditions 50:50. A somewhat wiser and knowledgeable surf club member suggested you try Coalcliffe beach and with the help of a life saver that held you into the wind you launched and very spectacular it was. All the fellows on the hill where I was filming reckoned you would never make it. I was amongst them and you made me eat my words. You crazy bastard, my hat off to you, that is if you make it all the way to Cronulla. It is a long way from there to here, including the extra 6 km. you already had done.