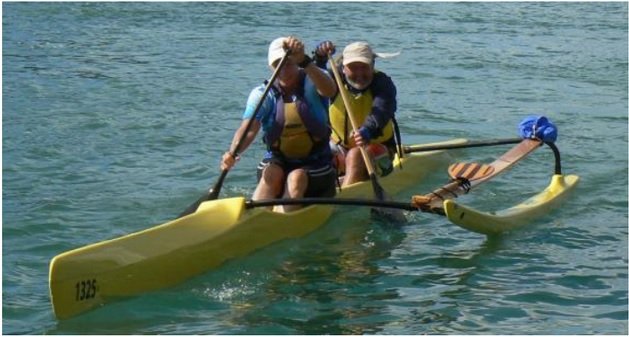 The sun was still preparing to rise as we crossed the bar but with a 95% moon we could see the waves. The crossing was therefore exhilarating but uneventful. Heading south and with a significant swell coming over our left shoulders, we managed to catch many small runners barrelling along past the familiar beach.

Denise thought it was a good idea when I suggested it a few weeks beforehand. The rest of the club thought we were both stark raving mad. Although there have probably been people who have done the circumnavigation, we doubted anyone would have done it in one day.

The plan was to head south to Evans Head, up the Evans River, through the Tuckombil Canal, portage over the barrage at the Pacific Highway, connect to the Richmond River and then paddle down the Richmond to Ballina. The distance is 91km. The craft was to be an OC2 which is a two seat outrigger canoe. Canoe means paddling with a one blade paddle and after every 19 strokes we change sides. That means as the counter, I have to be able to count to 18. As an IQ test this does not seem too difficult but you would be surprised how hard it can be to get it right 2000 times in a row