Between 6:15am and 6:30am the glassy waters of Pittwater ruffled ominously. “Uh Oh,” I said to Warren, or words to that effect. Being Australia Day, (or invasion day), runabouts started to appear everywhere. Invariably they had two blokes in them and a row of fishing rods. I did see one catch a 50cm fish just off a cliff. I had decided to go between their boat and the cliff but they drifted in so that there was no room. A bombie was about 5m from them so I just stopped and let themselves get sorted out. I don’t mind going close to a breaking wave but I would not have been where they were. Not to worry, nothing happened and they got the fish which was obviously more important than a mere boat.

A fluther of jellfish, or maybe a smack of jellfish, appeared below me. They were almost touching they were so dense and they weren’t all swimming in the same direction. With a tough camera around my neck I tried an underwater photo which sort of turned out. There are many wasted shots each day because of water on the lens. Wiping it off with a wet finger doesn’t really work that well but it sure beats Warren’s efforts of frantic lens changing when it would perhaps have been better to take the lens cap off. Just sayin’ ya know.

Another shark made it nine so far for the trip. It was a few kilometres further south that I saw some strange fins in the air which on closer examination turned out to be five people snorkel spearfishing. I said hello to one bloke who looked my way but he wasn’t talkative and the others just kept their heads down.

The wind had been fine until then but after I had finished smoko it started to blow about 12knots and eventually 15-20 knots which was a bit of a bugger. The arrival time for Shelley Beach was 1.00pm but I always organise it with some spare. Unfortunately we forgot to organise radio skeds for when I approached but at 11.30am I turned the radio on and at 11.45am Warren called and I was just five minutes away. As anticipated I hung around until he rallied the troops and I paddled in. There was a gap in the crowds right next to the rocks and Warren tried to let swimmers know I was coming. I headed for that point just as half a dozen teenage girls appeared over Warrens shoulder and walked ankle deep in water straight in front of me, totally oblivious to anything except looking good.

On the sand I dragged the kayak out of the water, the well wishers came and shook my hand and as a special treat a group of kids showed a lot of interest. Warren will talk about the organisers of the day but a very big thank you to them from me. 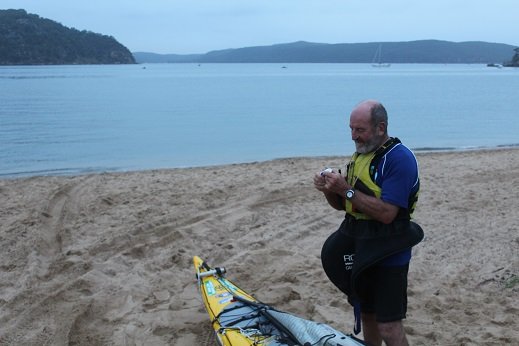 Ready to apply my lipstick with the water still glassy 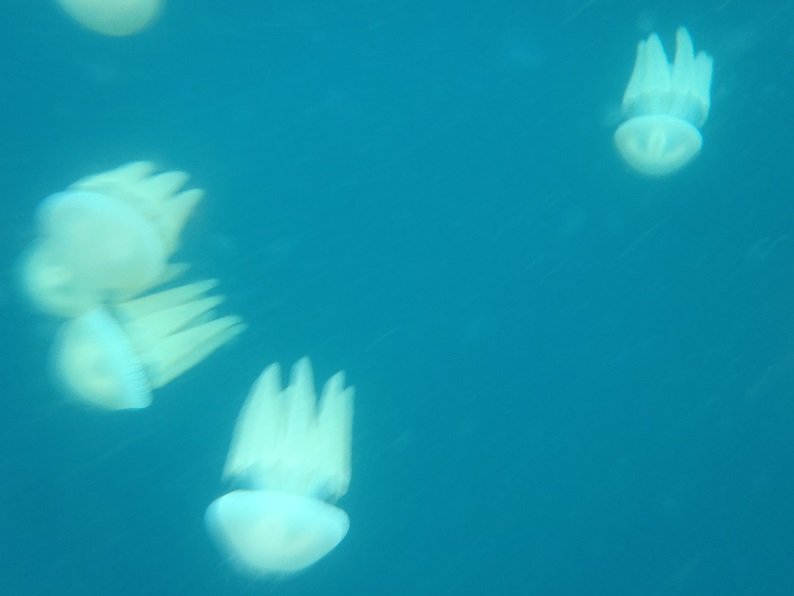 Part of the fluther 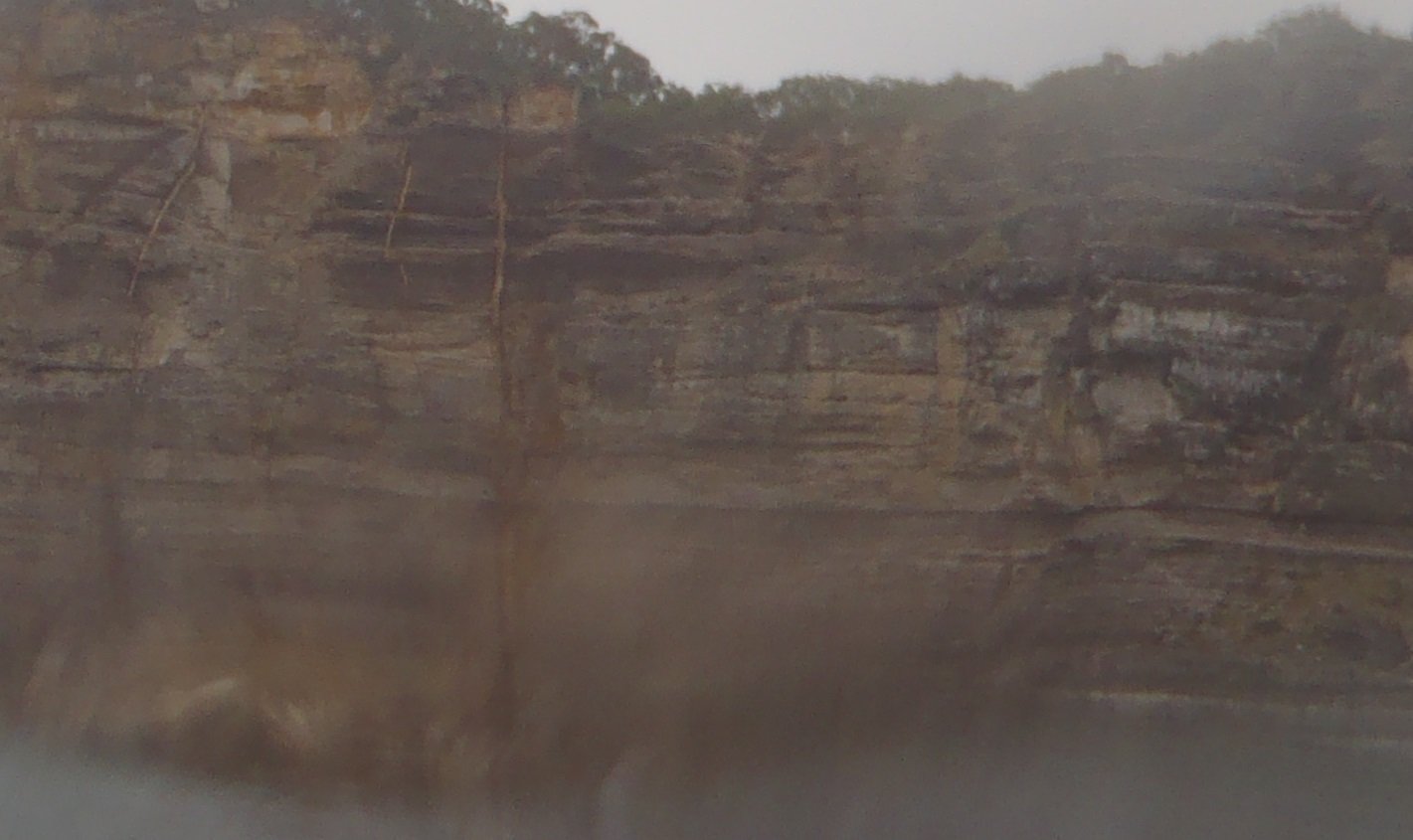 Warren likes rocks so I took this for him. I think that I have discovered gold bands in the cliff. We might come back to mine them later. 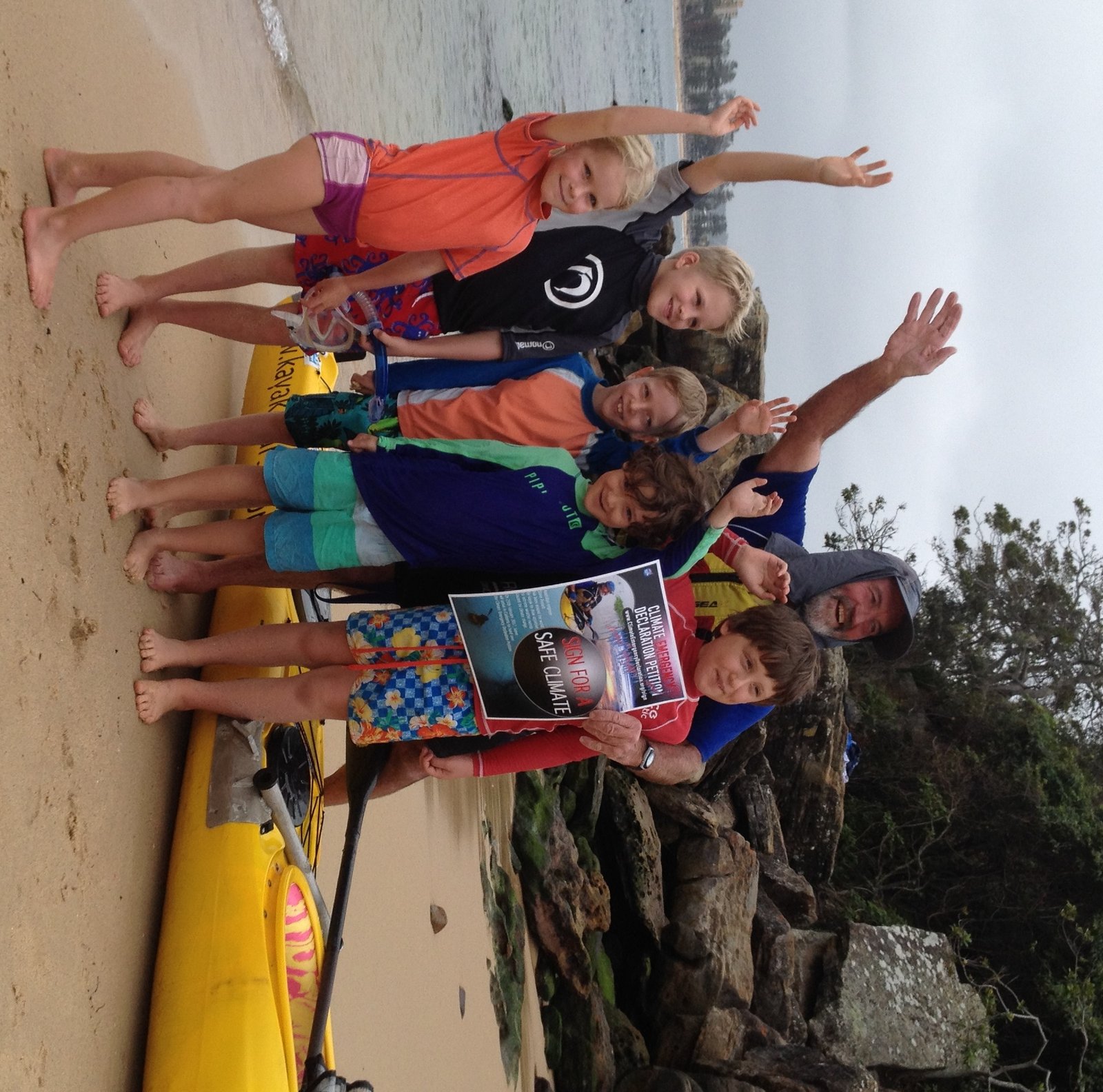 Kids on the beach. I wonder if they will come to hate our current crop of major party pollies 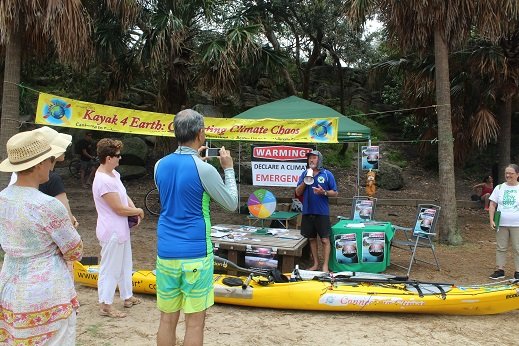 Well organised and set out 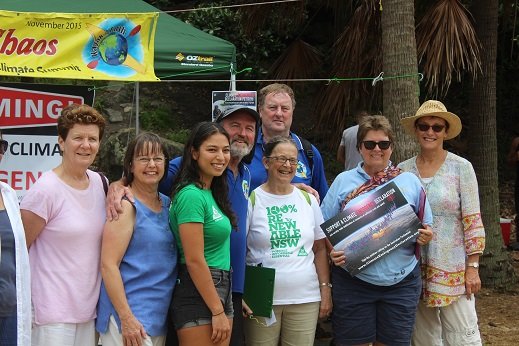 Warren    DAY 4   Well, devoted reader, Steve was in the water just before 6:30am this morning, it was a cool overcast morning, which makes for comfortable driving though not for Steve as he faced a southerly. I arrived at Shelly Beach, a beautiful little bay at the Southern end of Manly Beach, at about 8:30, to be met by Janet and Anne who were setting up their marquee ready for a day of promoting the Declaration, gathering signatures and of course, welcoming Steve.

It was great to see a number of other helpers turn up to show their support or to gather signatures, and I am very happy to say, Janet, Anne, and Malcolm were the three mainly responsible for collecting 174 signatures. A remarkable effort considering its Australia Day and that was people’s focus

Steve arrived ahead of schedule at 11:45, and I was caught out as I’d happily watched the welcoming team disperse on the petition quest. We moved to Plan B and looked very versatile, efficient and organised if I did say so myself.

Steve arrived on the beach to a noisy welcome which almost involved running into six teenage girls who were fully focussed on how cool they looked, and were oblivious to the fact they were headed straight for the spot Steves kayak was headed. They would all have met at the waters edge. Swift action by the expert support team saved the day

As Steve stepped ashore people gathered around and a number of  little kids swarmed over to see, which was  great to see, and their parents got some lovely group photos of the kids with Steve