Started at Shelley Beach with a southerly breeze and a nor’easter predicted. Before I got to Sydney Heads about half a dozen kayakers came past on their way to where I had from. They were from the NSW Sea Kayak Club. You can’t see kayaks from very far away and to have a group of them bob up in front of me was a weird feeling. We had started late, hoping to struggle the first couple of hours and then be blown down to Cronulla. Warren was to collect Lyn from the airport and we would radio sked at 11.30am. Warren picked Lyn up on time but I was slowly falling behind schedule as the southerly showed no sign of relenting. They were at Maroubra and I was still north of the sewerage stack at Bondi for the sked.

Lyn had advised me that a group of jellyfish is a called bloom.  In other words she reckoned that my advice that the collective noun is a flubber was wrong. Wrong? Me? Because Warren is a civil engineer and like me, very clever, I asked his advice. Our code of ethics does not allow us to practice outside our area of expertise so Warren said he was not sure about jellyfish but that he did know about jelly beans and that the collective noun is a packet. You can understand why I revere the advice of such a man, but I just thanked him courteously and thought about it. My conclusion was that it could also be a jar.

While the two support people got to know each other over coffee and toasties I struggled on against the wind. They said later that it was a hot day and they appreciated the cool southerly breeze. Apparently, in an effort to maintain radio contact they wandered through the rifle range at Malabar. Warren, who as I have said is very astute, worked out that when there was a target quite close and a mound of dirt that people shoot from when they looked the other way that the golf course might have been more appropriate. We finally made contact them by radio when they stood at the third tee which from my perspective was on top of a cliff. Apparently there is another story involving a sewage treatment plant and yet another pretending to be undercover with the radio but they are for the amusement of the crew.

The wind had dropped a bit but there were still a few white caps around indicating 10-12 knots. I radioed that I was ready to chuck it in and head to La Perouse. The day was only 30.5km for a slog of over seven hours. 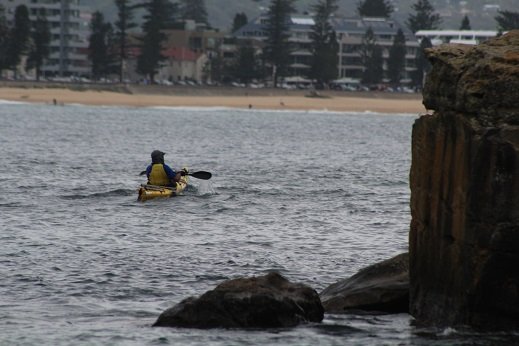 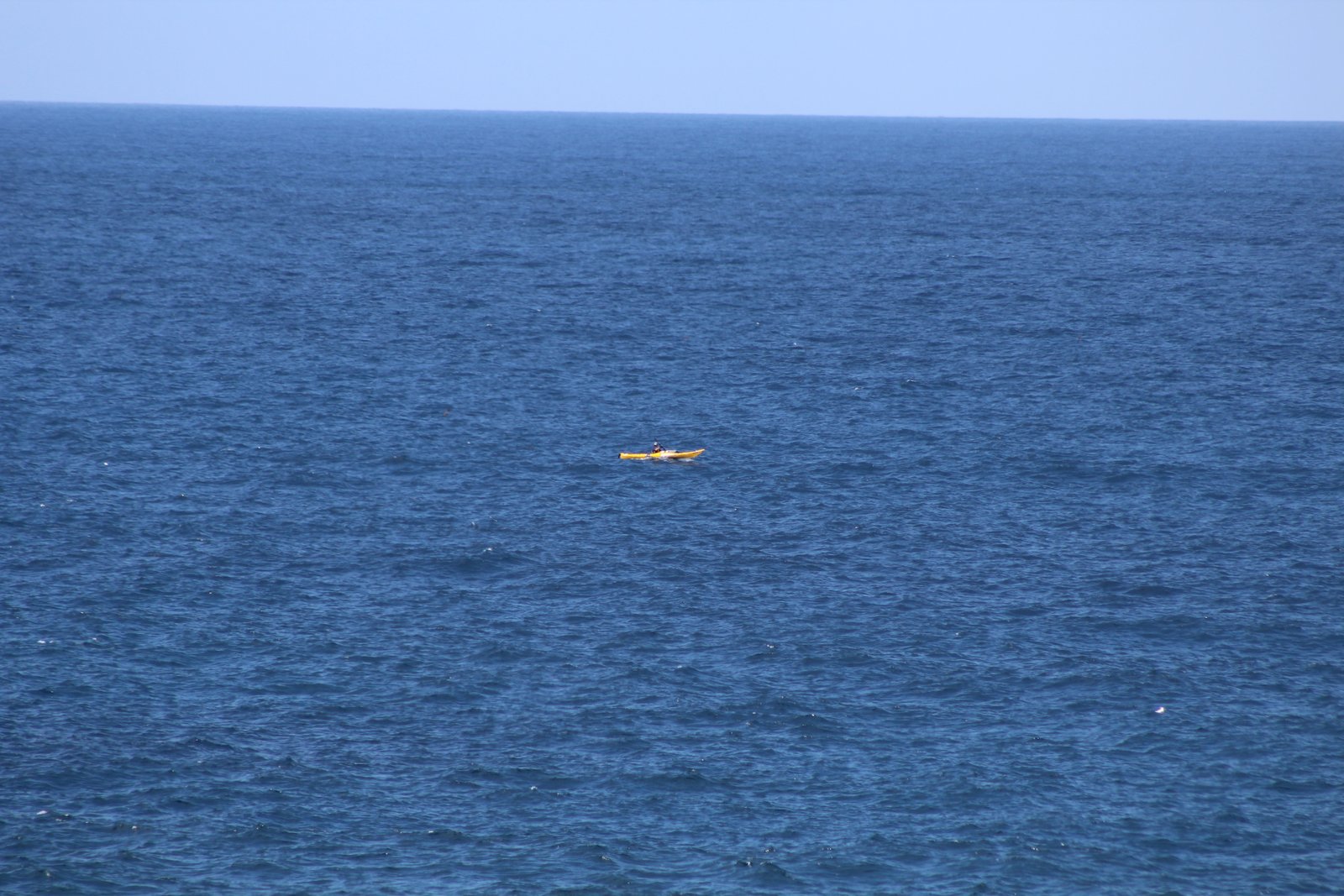 Wind is finally dropping but not changing direction as forecast 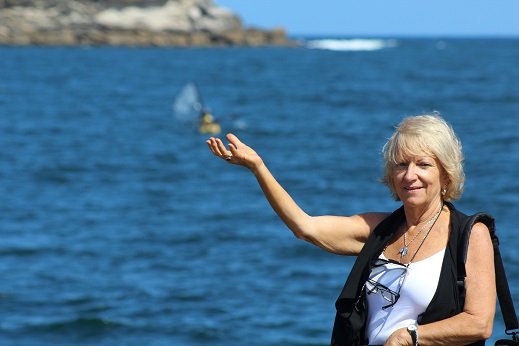 The crew training each other in photography 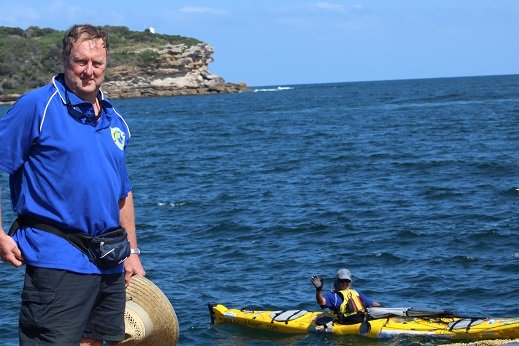 Can you please take this before I hit the rocks 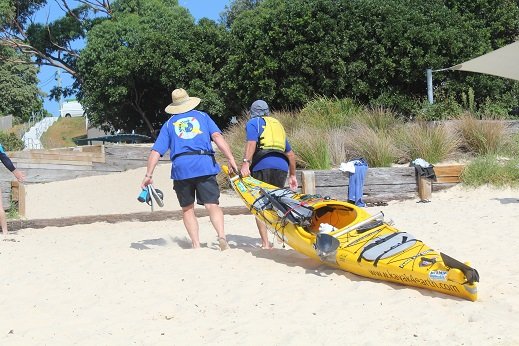 I needed some help up the sand 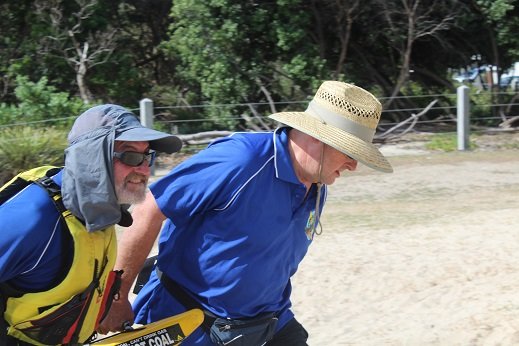 From the front. Pull!

Warren     Firstly I must apologise sincerely for an omission regarding the Shelly Beach welcome on Thursday. The fourth signature collector, and somehow my notes let me down, was Judy Lambert from Manly Greens and Friends of Cabbage Tree Bay. Judy spent most of the morning talking to the public and gathering signatures, along with Janet, Anne, and Malcolm

Steve put his kayak in the water at Shelly Beach, with trepidation about the forecast southerly,  which effects his progress greatly. After waving him goodbye I headed for the airport to meet Lyn who was joining us for a couple of days. Once the composite expert support team was set up, we headed south to make radio contact with Steve. While we were doing this, unfortunately Steve overheard Lyn say we would head for a coffee shop until the next radio check. I say unfortunately, only because it seemed Steve heard this, and I’m pleased  that static muffled most of his reply, as he was not enjoying struggling a southerly. After a number of very professional radio skeds, Lyn and I moved South for another headland vantage point. This was exciting as we drove into a rifle range, and realised there were targets both sides of us, and they were a long way from the shooting positions. Proceeding on foot seemed terminal so we exited rather hastily, but with style. Next we, that is, I, tried to charm the security guard into allowing us to drive into the Malabar Sewage Works looking for the elusive headland. I failed, so we walked through a golf course at Malabar, and made contact with Steve. Next step was to meet Steve at La Perouse for him to end the days trip. Two of us had a very pleasant afternoon. By the way, the coffee was excellent