Up at 4.00am but not keen on the wind, looked too much south in it for me and too much of it. Never mind, back to Angourie in the corner at Spooky Beach. Was jealous of a “goat boater” who was enjoying himself catching waves out of the wind. Got a shot of some surfers at Angourie Point and then set off round the point towards Brooms Head.

The nose climbs towards the sky

We crash down with a thump

And pretend we are a submarine

Then up we go and power on full throttle

Crash it hits the boat and drenches even my hat

The noise is incessant

Cliffs on my right but stay close

Do anything to reduce the wind

But watch the waves

7km from another person that would be messy

I can tell by the trees

It is a long way off and the wind

The wind doesn’t want me to get there

Who will win the battle

Not the bloody wind I can tell you

It took five hours to reach Broomes Head and it was a relief to hit the sand and have a feed. I drank deeply and headed back out with another two hours to The Sandon for a scheduled stop. The Sandon was pretty gloomy and there didn’t look like a way in but luckily I know the entrance. Stay close to the break on the south side and you won’t get a nasty surprise. Lyn met me there right on time as she had done at Broomes Head. I was feeling the pressure but Minnie Waters was my goal and that is where I was going to go. It was a bit over three hours but the wind backed off a bit and I made it ten minutes early. 41.5km, 10hrs very hard slog. Very satisfying.

All was pretty good. A couple of blokes helped lift the kayak onto the roof because I was buggered. We got back to the tent at Wooli but then the day started to take its toll. Lyn gave me a beer, which I struggled with, then a piece of cheese and a cracker. I went to sleep, cold and exhausted. There was no chance I could have written this nor could I have taken the images off the camera and loaded them to the website. My brain had shut down. I had done what I said I would do though.

After an hour I woke, Lyn cooked pasta and I started to feel OK again but after posting briefly on Facebook I collapsed into sleep again.

This was supposed to be decent paddling but the rain was teeming down with a strong wind with way too much south in it for me. We checked the beach and visibility was about 300m so the boss put her foot down. No paddling. We did meet a lovely crew which is covered in Lyn’s blog.

After packing up in the rain we quit Wooli and headed to a motel in Coffs Harbour where luckily the sun came out and everything except the mattress dried. Discovered that the problem with the back of the ute was the seal on the canopy, not my construction component. At least finding the problem allowed me to try to fix it. Cross fingers. Shame I didn’t shut Lyn inside and pour water on it before we left to make sure it didn’t leak but I reckoned I had it covered. Oh well, “Trust me” doesn’t seem to work like it used to. Maybe it won’t rain again. That would work.

No images on the Olympus Tough. I dunno. Have deleted everything and will try again tomorrow. Bit of a disappointment though as I went in really close to the rocks to get a shot and had to be very careful. 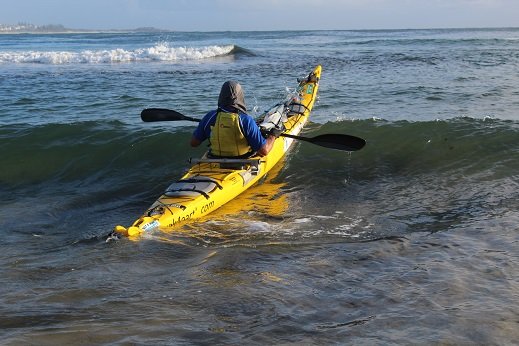 The calm before the storm so to speak. Leaving Spooky. 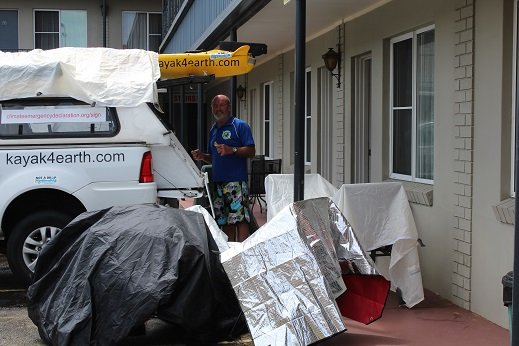 Trust me. I’m fixing the leak.

DAY 5      Before I start my blog for today, I want to wish my beautiful and caring granddaughter Serenity a very happy 19th birthday, love you.

Our day commenced at 4am. We had to drive back to Angourie, where we finished yesterday, which was an hours drive from our campsite. Due to the “wetness” problem last night we couldn’t complete all our online commitments. So Steve wanted to make sure this was done before we left. We finally got away at 5.30am. Oh and another thing, today is the first time I have brushed my teeth using soda water! I felt quite bubbly. all our fresh water was either too hot, too sweet, or in  the case of soda water – just right.

We arrived at Spooky Beach (gotta love that name) to be greated by strong southerly winds. Steve pushed out into the surf at 7am; it will be a hard slog today.

During his day paddles Steve sometimes takes short breaks at beaches along the way, if there is a safe landing spot. Today he came in at Brooms Head through a small surf break, a bit choppy but no problems. He needed to stop to eat and build his fluids back up. With the southerly every stroke he makes propels him forward, if he stops paddling to eat or drink he goes backwards. Once he was fed and watered he ventured back into the water for the next leg, Sandon River; one of my favourite places.

I have stayed at Sandon with my family, it’s one of the most pristine and untouched places I have visited. It’s a National Park and well monitored. It’s an ideal place to get away from all the trappings of life. However not for me today! My 2 way radio won’t work, my camera battery appears to be flat and there is no phone reception. Steve always gives me a time that he expects to arrive,  “Trust me he says I will be there when I say.” I pull out some old technology, my trusty binoculars and search the horizon.

True to his word he arrives almost on the dot of 1pm the time he gave me. He has had a hard slog but after a brief refuel wants to push onto Minnie Waters. He is an amazing man, determined, driven, unique, tough and to me very special.

His estimated time to arrive at Minnie Waters was 5pm. As our radios were not working I wasn’t sure how he was travelling. But true to his word as I searched the horizon, there he came at 4.50pm into Minnie Waters. Steve’s guesstimating of his arrival times is uncanny. I know that sailors and paddlers can estimate arrival times based on their experience and conditions, but he is very close to accurate.

This has been a very hard day, Steve paddled for 10 hours, over 42 km. See the video I took tonight on his kayak4earth Facebook page and you will see how much today took its tole.

I must at this time acknowledge our thanks to the Marine Rescue volunteers all along the East Coast. They have all been supportive and eager to offer local knowledge for bar crossings etc. along the way.  In addition they have been enthusiastic about our journey and what it’s all about.

The southerly was still blowing this morning and it was pouring rain; the ocean was pretty messy and the visibility was poor. Steve said I could go it’s not that much worse than yesterday… When Steve asked me to come on this trip as his support crew, he gave me a bit of an insight into the role. One of the points he highlighted was that if he wasn’t thinking clearly due to fatigue or other influences I should make him see sense. Well that’s what I did this morning. There was no way he was going to have another day like yesterday or perhaps worse.So a lay day was called.

We called into Wooli Marine Rescue (which is the smallest Marine Rescue unit in NSW) to let them know our decision; as we had been logging in and out with them since Evans Head. Jacki who has been great said “I think that is wise, adding where are you?” “In front of the tower.” I replied. She said that seeing we were right there to go up and meet Graham and check out the radar. We did go up and met Graham and had a chat and thanked him for his help. During this conversation the phone rang and it was Jacki inviting us around to her home for coffee on this wet bleak morning.

We turned up at their home, two bedraggled strangers and were made welcome. It turns out that Jacki’s husband, Richard is the Unit Commander for Wooli Marine Rescue and also a passionate kayaker. We had a very interesting morning with them and Richard makes a great coffee! The weather has not been kind to us in Wooli but the people certainly have.

We headed back to camp and it was oh so wet. Steve said let’s drive into Grafton (approx. 40 minutes away) and get a bigger tarp to cover the car and the gazebo,(which had a fine haze of rain drifting through it). We got down the road about 5 km and he said oh bugger it, lets go back and pack up and stay in a motel in Coffs tonight.

So here we are. We have spread our wares so to speak across numerous car spaces, the manager very graciously letting us these use these spaces. “You’re right he said it’s not busy yet.”

All dried out we caught up on emails etc., then a pleasant meal.

Another day at the office tomorrow. Steve will put in at Arrawarra and paddle to Coffs Harbour. There is a welcome to Coffs at 3pm, this has been organised by Climate Action Network, Coffs Harbour. We hope to see you there.