A day off and I can now walk normally, enough so that no-one notices anyway. After a great drive listening to the mix from DJ Lea, I picked Klaas up at Sydney Airport and met his some of his family who had come for the funeral. Nick, his other son, was on his way back to Austin, Texas, where we will base ourselves to buy the RV and get ready. Nick seems like a smart cookie as well as being a lovely bloke. He looks like a Texan from the movies too – tall and fit looking, so probably apt that he lives there.

Now let me introduce Klaas to you. He keeps telling people he is nearly 83 but that doesn’t happen until 5th March. See below, I’m the good looking one. 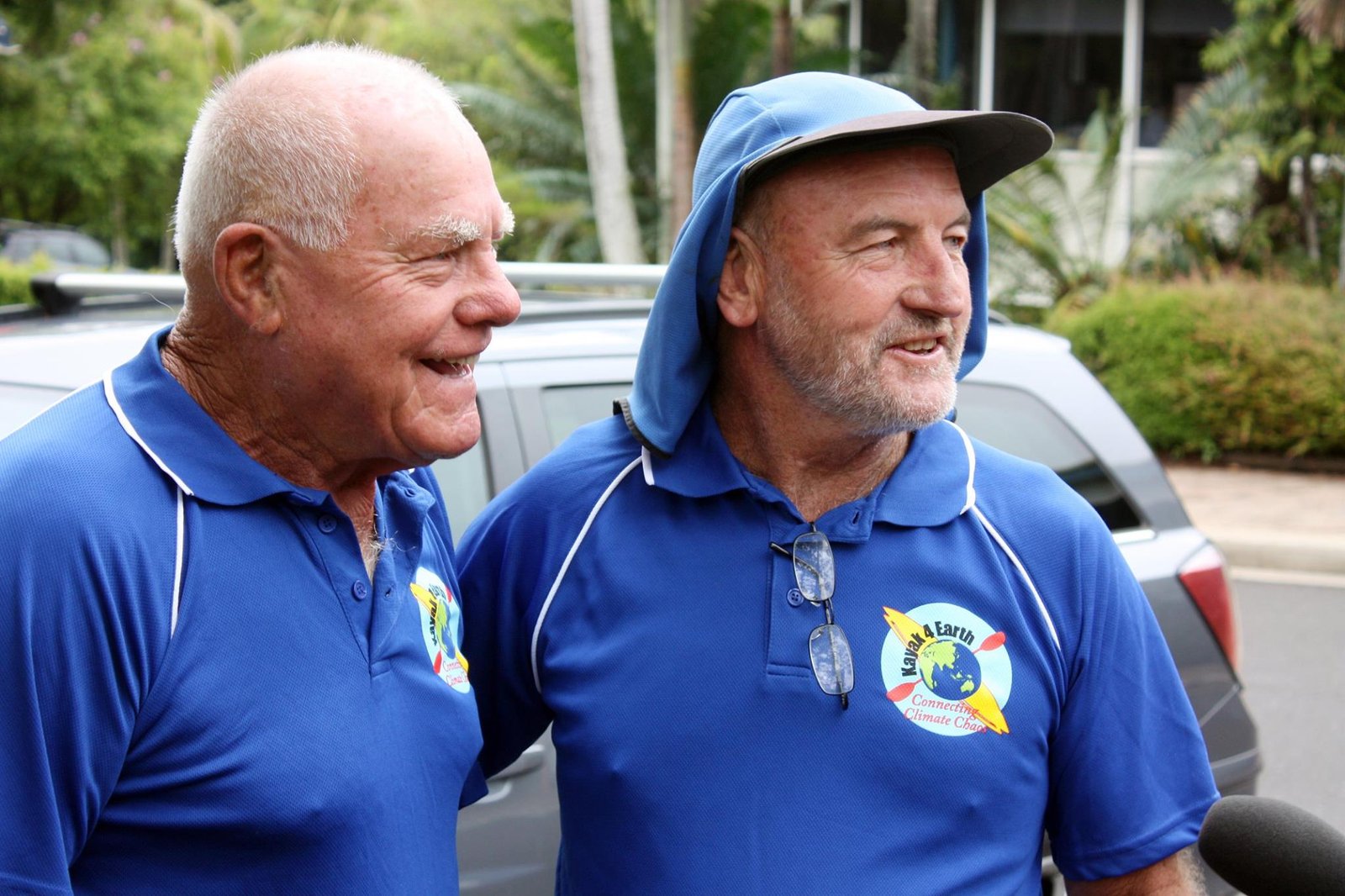 To give you an idea of his character here is a little story. Last year Klaas came to see me on my boat, next door to his. He was holding a handkerchief on his forehead where he was bleeding.

“I got into a bit of trouble at the boat ramp near the sailing club.”

“Well there was this bloke there who had left his shoes near the fish washing tub. I was washing sand off my feet and Wolfie sniffed this bloke’s shoes. He kicked at Wolfie so I told him not to kick my dog. He said he would kick my dog if he liked, and stood right in my face so what was I supposed to do? I leaned forward quickly with my head and he started bleeding and yelling but eventually he went away cursing me.”

I was disappointed in Klaas, so I told him so. “Klaas I would have expected a bit better from you mate. Surely at your age you can get your timing right to do a decent head butt. Let this be a lesson to you. Either get it right or give up because you are too old.”

And that is one of a thousand stories like that about Klaas. His book, “Past My Use By Date” chronicles a life of adventure. That is why he is with me. We will see tough times. There will be lots of trouble. We have no idea what that will be but we will sort it out when it comes.

Now to the shoe saga, seeing as a few people have commented. I used runners that had been successful before and were about half worn. On the first trip walking boots aggravated my Achilles tendon so I was reluctant to start with them. On day two I went one size up in runners after throwing out the size nines and used thick running socks. Day three I went for thinner running socks with the walking boots which is what I will continue with. I must admit though, my thongs were great today and the Elastoplast is still where I taped it.

We drove back through Dapto and up Macquarie Pass. Dunno how I got it wrong but it is a bit further than I though. There is bugger all edge to the road so it will be nice when I get that over and done with. Still about 75km before I am off the motorway though.

We are off to dinner at the Paragon Café where we used to stop in 1971 on the way back from the snow. Still a great spot. Gotta go and take the washing out of the machine. The caravan park is very nice and the ground was easy to drive the pegs in. The Bunnings is huge so all good memories of Goulburn so far, except that some idiots put a telegraph pole in front of the Big Merino.

Questions about DJ Lea and her music are most welcome. She is very talented.