The goal is to get to Paris. The river won, so Plan B was required. With a few hours sleep to recover from the river ordeals, I woke at 2.00am with the answer. I would get a bicycle and pedal across to the coast, which is only about 1600km away.

An internet search showed Bikes Plus had many awards for service so we tried there first. All I can say is that their web site had to be self-praise and worth as much. Service? Advice? The guy wasn’t even going to lower the seat so I could try it for size. What a waste of time, and probably unfair of me to not try another bike shop but I went to Walmart. It cost $150 all up with helmet, spare tubes, tyre levers and new seat. The seat was straight across for putting your backside onto without the other bit under the testicles that is usually there just lurking, waiting for an opportunity to inflict pain.

For decades I have thought bike seats were a crazy design and here was one exactly as I had designed in my mind, and it was only sixteen bucks. Back at the RV Park my test ride was less than perfect. The bike was too short and the seat was uncomfortable, but the gears were good. Oh well it’s only for a month I thought.

Doesn’t he look good. Beard trim and all. 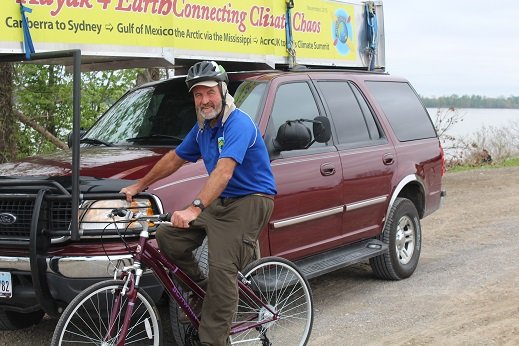 Klaas and I set off next morning to the departure point at the Mississippi. The first thirteen kilometres was on the river flat and then a climb onto the bluffs for a last look at the great river system. The seat came loose and the bike was uncomfortable. Klaas had gone ahead and there was no phone. Mostly the scenery was just farmland but there was small community next to a bayou. All the houses were small, standard long and thin shape of the poorer areas, and about 4m off the ground. Presumably that made them above any known flood level. 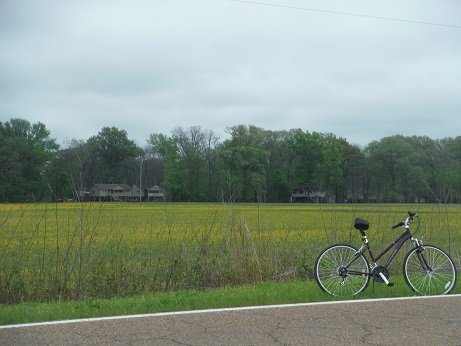 The climb up the hill past the grey Kudzu wasn’t as hard as expected because of the gears. Green patches were appearing all over, heralding the coming of spring and with it the mosquitoes. Klaas was halfway up ready for a photo so I grabbed a spanner and fixed the seat. For ten kilometres I had been able to experiment with where it should go so at least I got that right. After a drink and a chuckle at Klaas’s discomfort with the mozzies I set off with a new attitude to the bike. It was starting to grow on me plus I was getting a handle on what my speed would be. Unfortunately I was a big disappointment. My average speed was a bit over 8mph, not even quite 15km/hr. 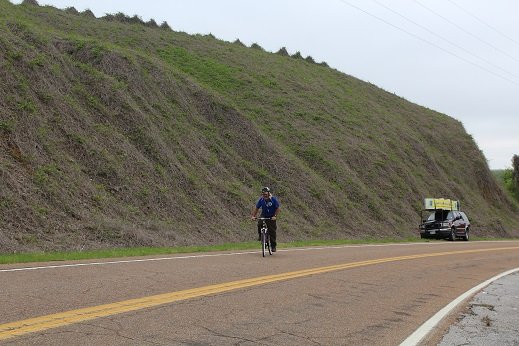 The area on the hills was much wealthier and much more populated. Churches, mainly Baptist, popped up with monotonous regularity. Pretty soon we reached Ripley where Le Chef issued sandwiches which we both devoured in seconds. There were road works but I sort of worked out where to go until I came to a stop sign and wasn’t sure whether to go left or straight ahead. After trying to flag down cars and ask, I chose straight ahead. About six cars made sure their widows were up and just drove around me. It is so sad to see this in America. People are so fearful. As I found out earlier, hitch hiking in the USA is a thing of the past. Americans are now too scared for that to work. It is not a reflection on their generosity, just a reflection on their media.

Having made the decision to go straight ahead the man himself went whizzing across from right to left at the traffic lights a few hundred metres ahead. He had the GPS so he had to be right. Turning left I rode for a couple of kilometres and spotted an old bloke standing in his driveway about 30m off the road. I called out to him a number of times but it took a while to get through. This sort of behaviour must be foreign. Eventually he came towards me and he could not have been nicer. Together we figured out what I needed to do so I set off in pursuit of Klaas. Luckily he had stopped about another kilometre on. He had got to where we were by guesswork just like me. He had tried something in the GPS that had not worked but I just put the destination back in as I had done at the river and it came up with the route that the old guy and I had figured out. Back on track. 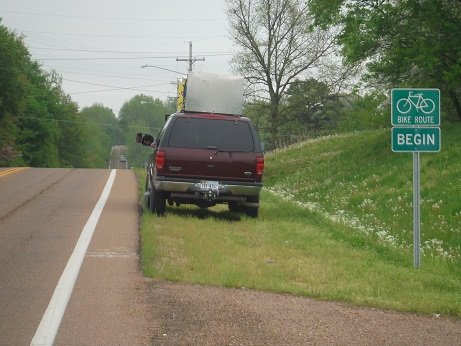 The country was rolling hills and a sign proclaimed the road a bikeway. It wasn’t the sort of bikeway I was used to though, just an ordinary bitumen road with about 40cm or less outside the white line at the edge. There was a green crop in most of the fields. It looked like grass about 40cm high but no doubt would mature into something with a head. Pity I am so ignorant of these things. I am not ignorant about water though and it was interesting to note the lengths that the farmers go to directing the water off their fields as quickly as possible. Back to the old issue of why the Mississippi, along with most rivers in the world, have to cope with more water and thus more power when there are significant rainfall events.

A drain in the field 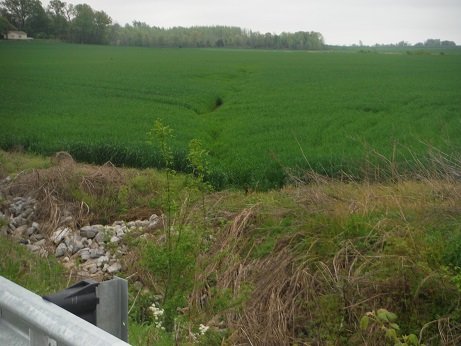 Runs into this one 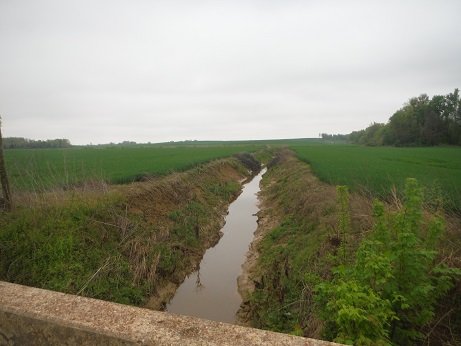 These are not contour banks. Note flow in foreground was quite fast 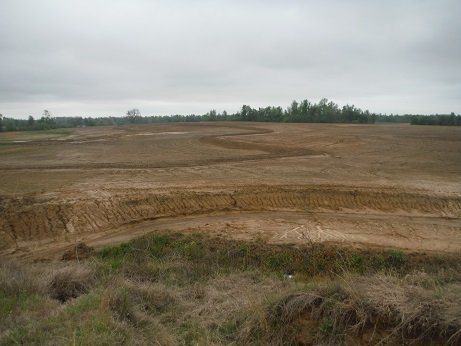 The next town on the map was Nutbush. “How many Nutbushes can there be?” I thought, but this one wasn’t even a town really, just a name on the map. I took a photo of the sign coming into town. It said the town is unincorporated, whatever that means. Klaas had stopped at some dilapidated building up ahead. The sign on the building boasted Birthplace of Tina Turner and the road out of town was named Tina Turner highway. All in all it was pretty unimpressive. Apparently there is a Tina Turner museum south of there which is more accessible to the I-40, the main interstate highway, but that’s not where we were headed. 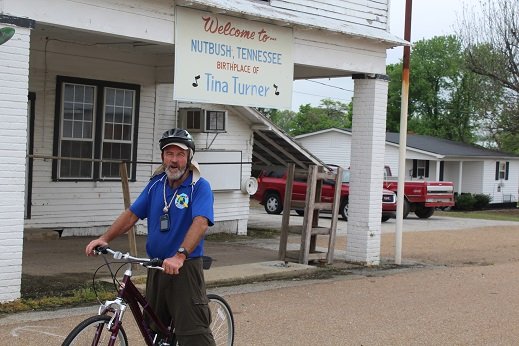 Brownsville was the next town. The houses set amongst the trees looked upper middle class and it turned out that Klaas thought it was a “nice place” along with my similar impressions. The ride through was pleasant and then something weird appeared. I couldn’t make out what it was but drawing closer it seemed like a huge sculpture of some sort. Called “The Mindfield” it was fascinating to look at all the pieces but I just couldn’t figure it out until I found the following by Beth Shaw Tripp. 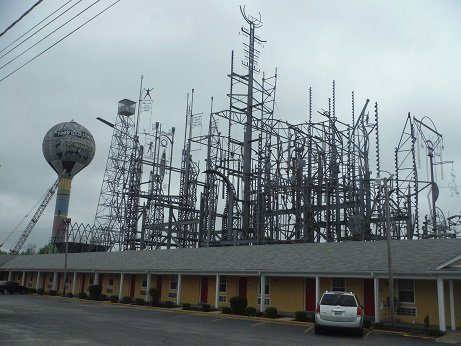 “The Mindfield” is the creation and life’s work of Brownsville, Tennessee artist Billy Tripp. The structure was begun in 1989 and will continue to evolve until Billy’s death, at which point it will become the site of his interment.  Included in the network of steel are individualpieces representing various events and        periods of Billy’s life, especially the death of his father, Rev. Charles Tripp, in 2002.  One of the latest large additions, a water tower salvaged from a defunct factory in Western Kentucky, was dismantled, transported to Brownsville, and reconstructed single-handedly by the artist.  It now stands as a memorial to Billy’s parents as well as a testimonial to his current life, his belief in the inherent beauty of our world, and the importance of tolerance in our communities and governmental systems.

My backside was getting sore and my legs were complaining that although bike riding is a great way to get across the country, there are limits to what one should do on the first day so we called it quits at just over 64km.