Good weather or bad weather, kayakers and bike riders eat it up. Some may say that I am biased but unless paddling up a flooded river, give me kayaking in the wind and rain any day. That said, on the bike on a pleasant day screaming down the other side of a hill that you have just conquered, well, you could get to like that pretty easily.

Oh, and another thing. If the kayak leaks a bit just sponge it out every now and again. Maintenance is minimal. Bikes have tyres though, and tyres have air in them. When you run over something sharp the air comes out and you have to stop and fix it. The good thing I guess is that the front one seems to be the one that goes down because the back one is just running behind a wheel that has already cleaned the road.

The bike came with standard valves and 700c tyres. Walmart don’t sell the same tubes as in the tyres of the bikes they sell but they do stock them with Presta valves. We discovered the valve issue when I went to put a tube in that I bought with the bike. Oh well, shit happens I thought, so we tootled off to the nearest Walmart which was less than 5 miles away and bought a pump. That’s when the trouble started. It took a while to figure out, but the inside of the pump didn’t fit the Presta valves. Once we discovered that and got a replacement pump life became a lot better. For a while there we were fixing flats every hour or so and it wasn’t fun.

Body wise it was a good thing to have done a shortish ride one day, move the van the next day, and then get back on the bike. By the time I got to Nashville the miles were just sliding by, even with the hills. I did have a tail wind, but knocked over about 130km that day.

Highway 70 proclaims itself to be a bike route in places. The signs seem to have been placed at random because mostly they are where there is 30cm of shoulder. I didn’t see any other bikes until twelve miles from Nashville when I saw an old bloke huffing along the other way. My excited hello met with a raised finger as he struggled with whatever demons were plaguing him. Two miles later a couple came towards me on a tandem and waved enthusiastically back. That was it though, sadly no more bikes.

Typical farm. I can understand why farmers want the water off their land but it does make a huge difference to the river system 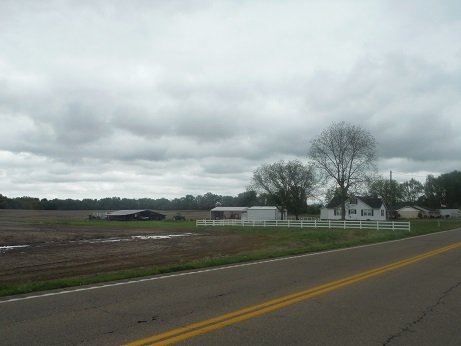 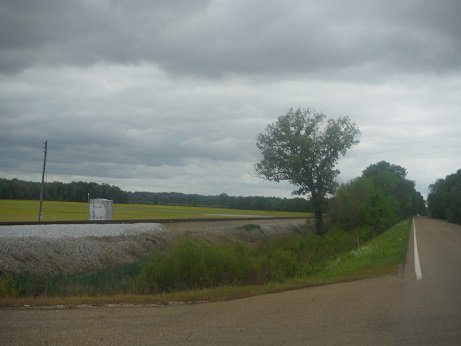 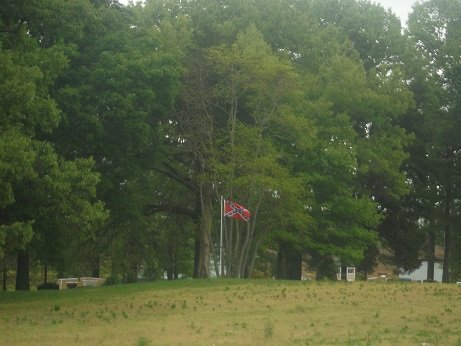 A lot more of these though 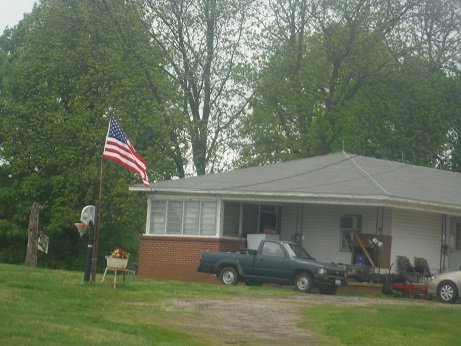 No city limits at Nutbush because it is not even a town. Now no sign of a mountain in Tennessee. No mountain top? Where was he born then? Did he really kill a bear when he was only three?  Was Davy real even. Oh dear. 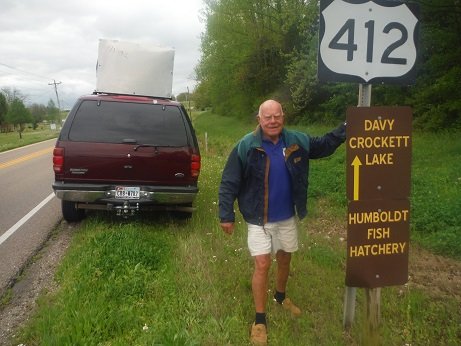 Lots of places without many people. Must be more in strawberry season?

I didn’t swear. Not once and I lost count of how many times this happened 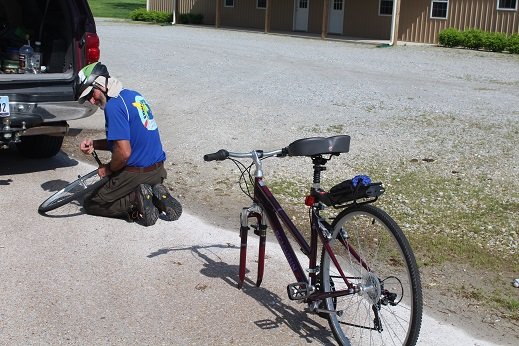 A real bikeway. Got this maybe 2% of the time. 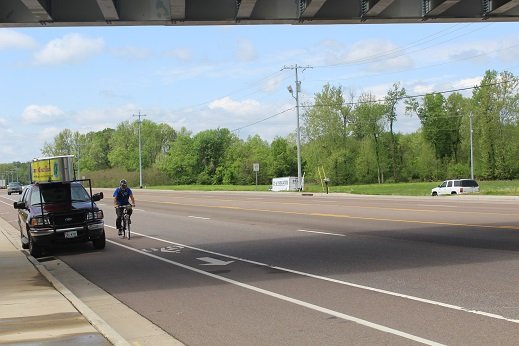 Quite a lot of these signs 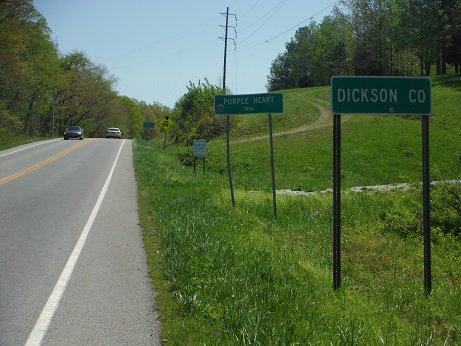 The sign says $1500 fine for littering. Seems to work. 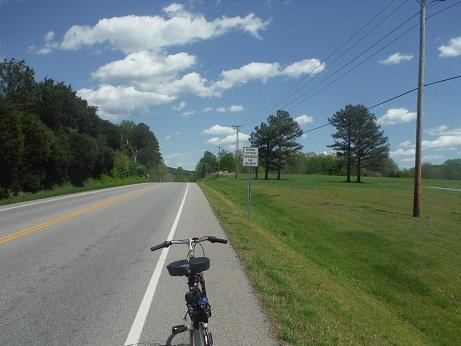 Klaas waited at the rotunda for an hour for me to come past. He wanted a photo with the cannon. I was about a mile short, waiting for him to realise something was wrong. It was the first flat tyre. In the end I managed to flag down someone to drive through and tell him. Scores of cars ignored me standing there with a bike obviously in trouble with no front wheel, and me waving my arms above my head. After an hour about three people stopped. They were all over sixty. Young guys in their trucks just whizzed past, although two waved at me! The people who stopped were fantastic. One couple had even turned around to come back. As I have said, American people can be great. Can you imagine standing on a country road in Australia with an obviously broken bike , waving your hands above your head and for an hour having cars drive around you? Some of these people are sick and I blame the media, including one ex-Australian climate science denier. 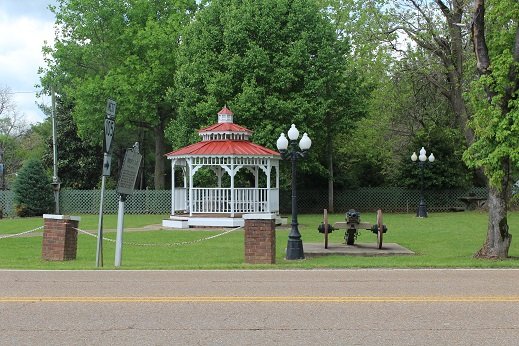 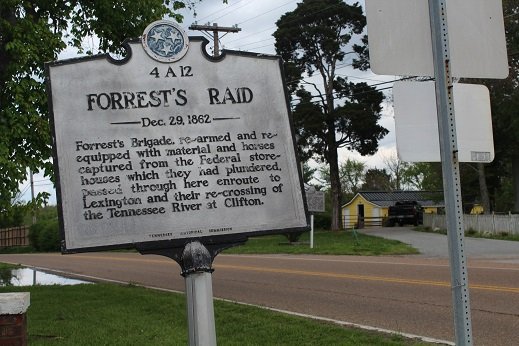 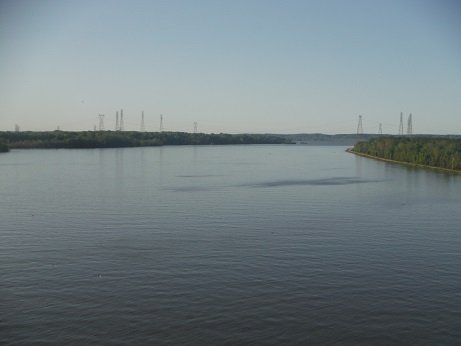 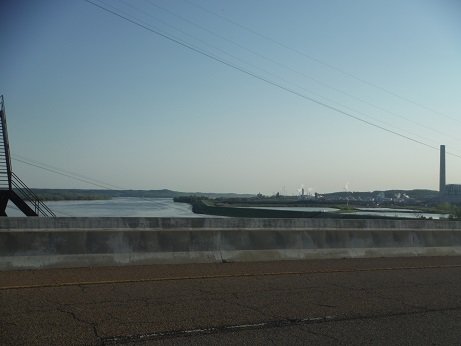 Look closely to see how high the water is. You have to go through water to get to the vans on the right. Lots more water to flow down the Tennessee into the Ohio and then the Mississippi all still in flood. 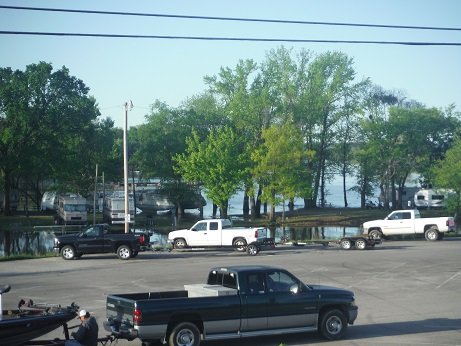 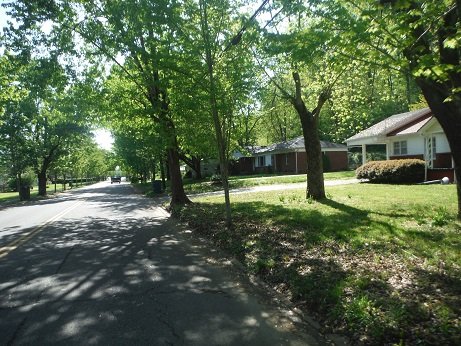 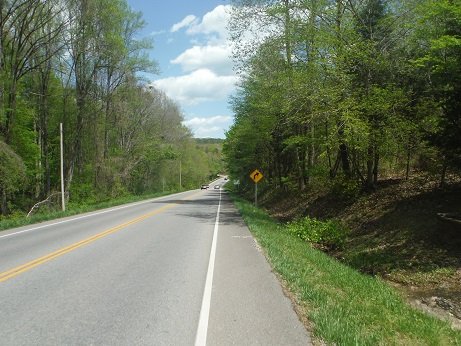 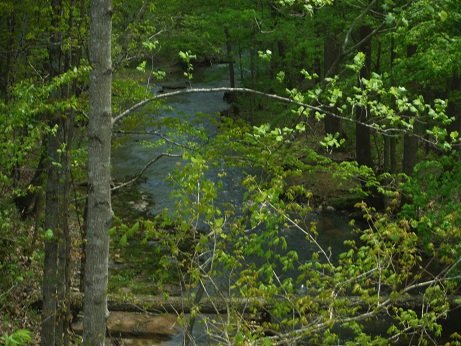 For Warren, who got Don and me through geology. This is everywhere around Nashville. Uplifted sedimentary mate? 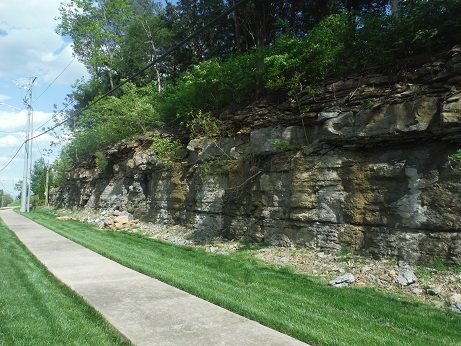 In the countryside one minute, then under the I40 and into Nashville. Not sure what the sign means but I just kept going. 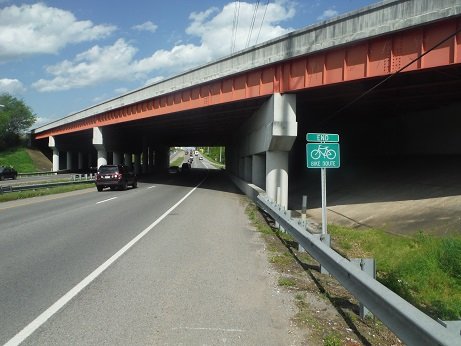 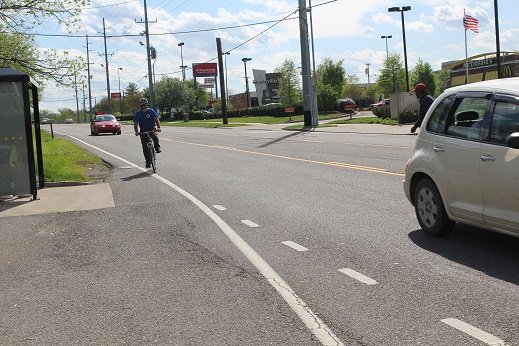 My mate Hoody, who planned part of this with me reckoned the climate project, of which climate reality leaders like him and me, was based at Nashville. We had budgeted to fly over before the trip but in the end decided not to. Mario, with whom we were liaising, is from Boulder nearly 2000km away. I didn’t realise but tried to contact the climate project in Nashville as I was passing through. Unfortunately there is no receptionist, no person that you can talk to unless you know who you want. There is a media person but you just get a recorded message. I decided to just ride to the address on the web site, but there isn’t any mention of the climate project there. Oh the joys of a foreign country.

It is off to the  east from here so I will be off line for at least four days while the old guy head out and rough it while putting as many miles as possible under the tyres. 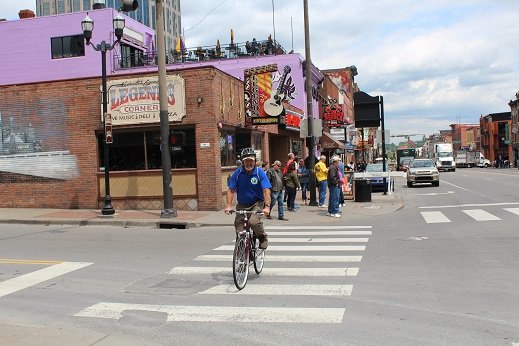 Headed for the brew house probably 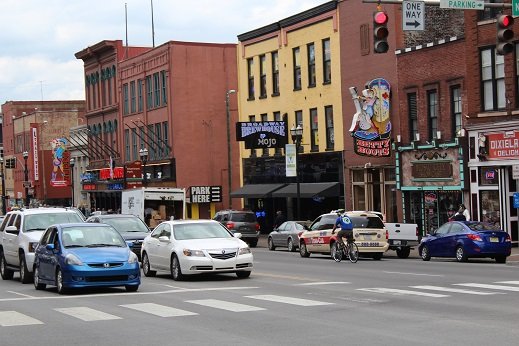 LYNNE. Well. Boys left early this morning for the first of three days biking.  We’ve had heavy rain for day or so and huge thunderstorms last night but weatherman seems to think its clearing up. For Steve’s sake hope he gets a good run of dry weather. Nice and cool so far for him anyway.  I’m left to my own devices so taking myself into Nashville. Am still chasing down likely contacts who may be interested in promoting some publicity but nil responses so far. Oh well, keep trying. Folks here in our rv park are very friendly, I’m finding. More outgoing, all out doggie walking, happy to chat, spending time outside their rv’s which is the opposite to what we mostly encountered down further south. I ride my bike around the park meeting and greeting. Some are families with small children. Great play centre for kids (and dogs) with pool and surrounds. Our near neighbours are a lovely couple who travel around rv parks, staying a while and working at the park in return for their park site. Great idea!. There are over a hundred sites.