Surprise, surprise. Thursday became a strong winds day as well so re-think. No rest today after all.

It was a quick 3.6km sprint in the rain to Woolooware Bay then back to the cabin to remove wheels. What looked like the only access to the water wasn’t all it seemed. The whole area has Cronulla Leagues Club, Toyota or industrial estate facing the mangroves. I thought this was a pretty poor use of water front land. Little did I know.

Anyway, slipping down a road between Toyota and the Leagues Club got me to the side of a drain that flowed through the mangroves. It was easy access beside the drain on decomposing woodchips to the start of the mangroves and then I thought about 15m through the trees and I would be there. It was dead low tide which turned out to be a mistake.

Immediately after the mangroves I went over my knee in mud but managed to use the kayak to stop sinking further. Nothing for it but to climb in. That worked but I had forgotten to unclip the rudder so had to slide back along the kayak on my belly to unhook it.

Once reinstated I could jerk forwards and use the paddle to propel me like on water. This worked slowly for 200m until I gradually started to float. The reading on the GPS was 300m when paddling became normal. Then I was confronted with a sea of rusty steel spikes about a metre or two apart, depending on the row. There was a sign that said Oyster Farm 30-58 but it had obviously been a long time since any oysters had been farmed there.

With only a couple of wrong turns and 2km from the start I was into the moorings area with a mixture of sailing and work vessels. There was a western land marker but to my chagrin I ignored it and headed about 300m inside it. All would have been fine at high tide, but it was left turn and head south west when I saw the sand bar.

Woolooware Bay is not much to look at and the mud has something unpleasant in it because pretty soon I had my leg over the side trying to wash away the stinging. Once out though, the bay is quite pleasant with lots of sand and Sans Souci just a few hundred metres across the water.

It was a bit of a slog into the wind until the wharf at Kurnell where I hid out of the wind behind what looked like an oil tanker. From there it was a quick dash across the heads into La Perouse. Total paddling only 14km but I am now right into Sydney.

Thursday (tomorrow) will have to be a rest day and then Friday will either be a paddle around to Watsons Bay or a walk there.

Klaas: Hi all. Another day. Heavy rain squalls. Up early and about. Steve did his usual crazy things. Launched kayak twice and second one was in mangroves and mud at the Southern end of Botany Bay. Watching him sliding and slipping through the mud and slush, expecting crocodiles to rip him apart he paddled across to La Perouse where I picked him up again .Weather forecast atrocious for tomorrow, (Thursday) but will see what happens. Not long to go now and after the big farewell on Saturday I won’t be able to contribute for a while as I am flying to the USA Sunday. If I don’t see or hear from you lot I will catch up later.Klaas 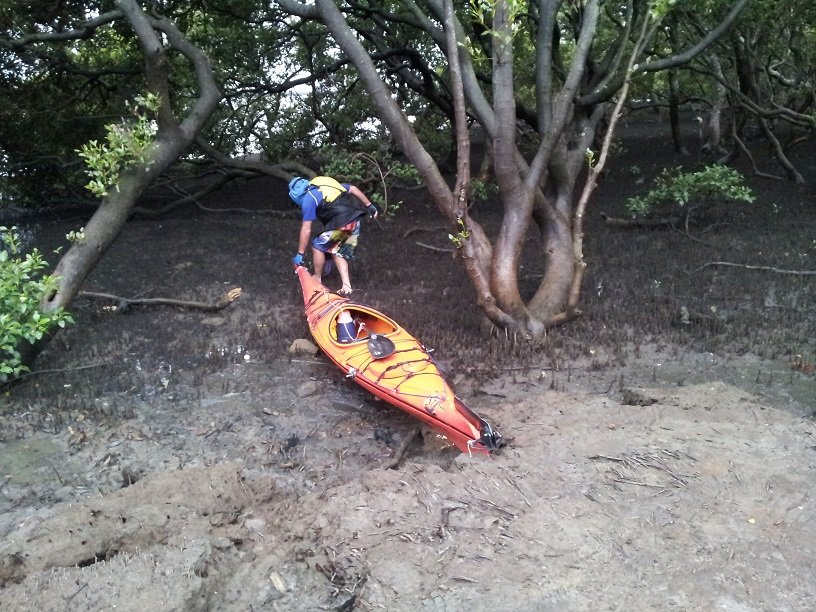