It was overcast and cool with good paddling temperature, but the wind was from the north at 12-15 knots and the route from Woodstock Point up the Pungo River was north for 4km then ENE. The friends Julianne had made were there to see us off and had read the previous day’s blog. Ella didn’t know what a hide was but said what I saw was a duck blind or bird blind. Dunno whether you sit in there and watch birds or shoot ‘em. Can’t see that either would be very rewarding. Pelicans and shags are few and far between and there is the odd duck and pair of geese as well as an occasional eagle. I’m not sure why it is, but birdlife is a fraction of that in Australia, maybe 5% at a guess, maybe less.

Ella also said that the mine that I photographed is for Phosphate. It is the Aurora mine which is the largest integrated phosphate mining and chemical plant in the world. As I put into the water Billie commented that when she started going to the area in the late 1960s the water was much cleaner. That is the same sort of story I have heard everywhere in my travels over the last ten years.

The 4km bounced along underneath me at a good rate and turning the corner I headed east and pulled the sail up. Within a minute it started to luff and within five minutes it was hopeless, the wind was from the north east. Not to worry I thought as I paddled directly into it in the hope of putting the sail up and changing angle at the far side. This was a good plan except the wind switched to ENE, exactly the line of the canal, a couple of hours ahead.

After three hours I entered the canal by following the line of the boats using the intra-coastal route. I did see a few sailing boats but overwhelmingly the procession was of stink boats. In the canal the wake from a decent sized stink boat dwarfs that of the barges on the Mississippi. Most skippers slowed right down but the odd one didn’t really care about a kayaker. This suited me if it was going in the same direction because I could get a bit of a run from the waves.

After seven hours I reached the bridge where the 94 crosses. The arrangement with Julianne was that I would not, under any circumstances, go past the bridge. The radios were not working, there was no phone reception, I was 1½ hours late due to the headwinds and there were swamps on both banks. While I tried to figure out what to do the big yellow sign on the Ford Explorer crossed from left to right far above me. Julianne was tooting the horn. She crossed over and luckily I just spotted the top of the sign coming back so I headed for the north bank up through the swamp hoping to find solid ground. After all, roads don’t float so there had to be ground somewhere. I kept trying the radio with no response and in the end I tried shouting. She returned the shout, I found a path through the reeds and there she was, a very welcome site for a tired and soaking wet kayaker.

We loaded up and headed back to the van ready to move the next day. Daily tally was 39km which I reckon is acceptable against the wind all day. Two non-paddling days days now.

When the cyclone chased me off the water two days ago we headed across to the outer banks. The morning was wet and windy when we headed east but by the time we got there it was drying out and although the winds were still strong they started to abate.

The outer banks south of Manteo is a strip of land and islands 15-30km off the coast. They are trying to migrate towards the mainland and in the main are just above high tide. The roads get cut periodically with very high tides. The US Army Corps of Engineers has done a lot of work maintaining them and dredging the channel across to Ocracoke Island but most engineers accept that one day they will have to be abandoned in their present form. In fact about 18 months ago the state abandoned the direct ferry route which took about 40 minutes and it now takes an hour and a quarter to get down to Ocracoke Island from the bottom of the long peninsula.

Amidst this, in a state that once prided itself in education and democratic ideals, the politicians have outlawed the use of the words Climate Change and Sea Level Rise. After a Coastal Resources Commission report in 2000 allowing for up to 1m sea level rise in 2100, certain science denying politicians have now managed to have that reduced drastically with predictions only 20 years ahead. The General Assembly in 2012 passed a law declaring that rates of sea level rise “shall not include scenarios of accelerated rates”. Although this was great for local comedians, it is pretty frightening stuff, akin to Book Burning Bernardi and his science denying mates like our prime minister. We won’t be burning witches at the stake but these people are doing the modern equivalent. If you are not scared of Tony Abbot and his thugs you should be.

Klaas         Hi all. Had a marvelous day yesterday exploring the Outer Banks in North Carolina. The waterways are huge and we explored multiple islands and drove along causeways to Hatteras, the playboys paradise, chesapeake bay, the Pemberton Sound where the Kennedies, the Venderbilts and Duponds have their summer enclaves and the rich and hopefuls brush shoulders with the proletariat. We went on several ferries and it was wonderfull to be on salt water again. Steve felt it too. He did not have his heart into bicycling and is now back in his element. I ate the best fish and chips ever, catfish done in beer-batter, it was delicious and the chips were superb,brown and crisp. Yummy. Looking forward to the next route along the coast to New York and than we are booked to Southampton on the 14th of July. Have fun. Klaas.

Out of the wind for lunch 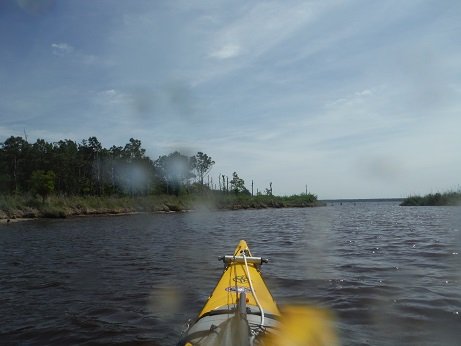 This is heading for the Intracoastal Canal 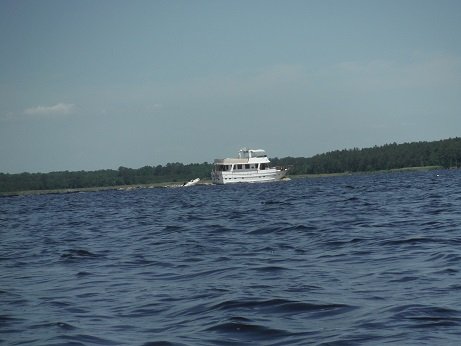 I quite liked this one 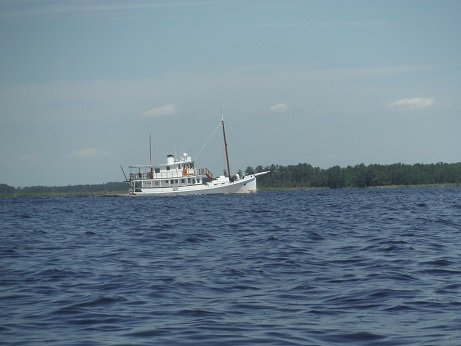 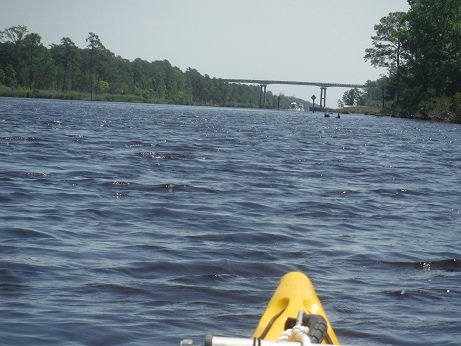 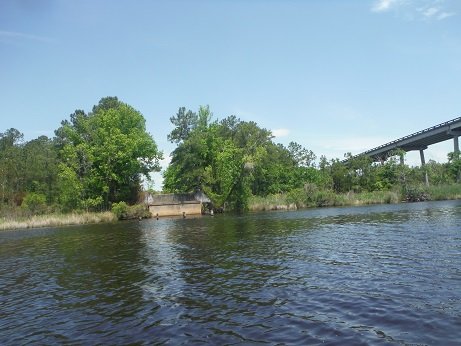 There are a few  houses and jetties 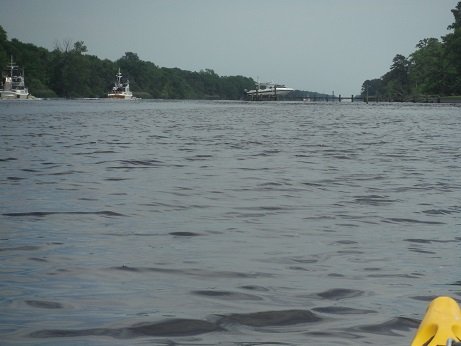 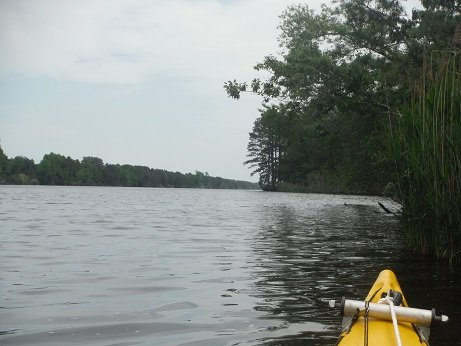 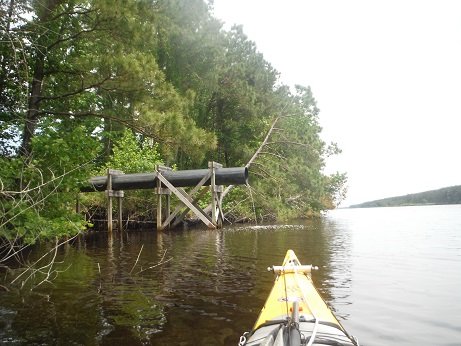 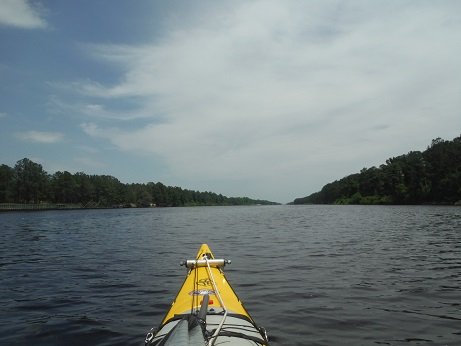 Have a good look at the was behind this 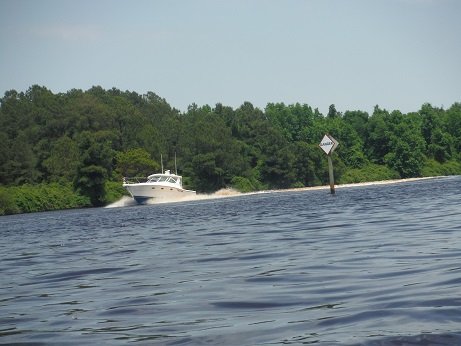 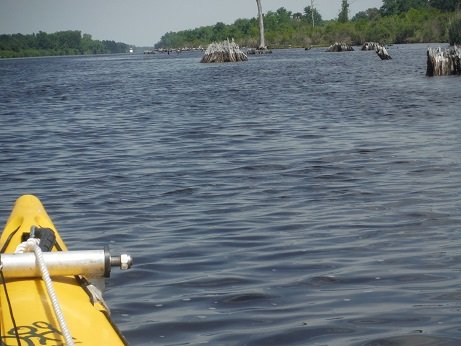 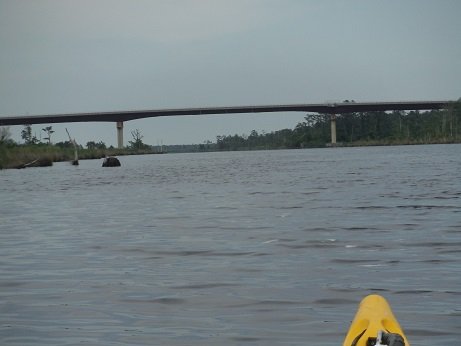 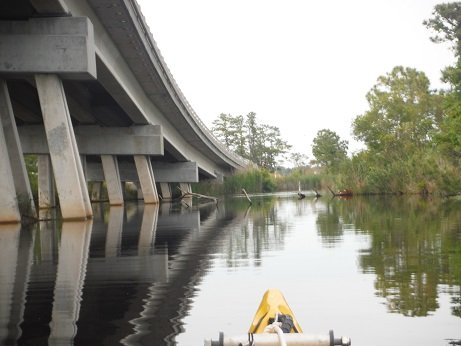 Welcome to the outer banks 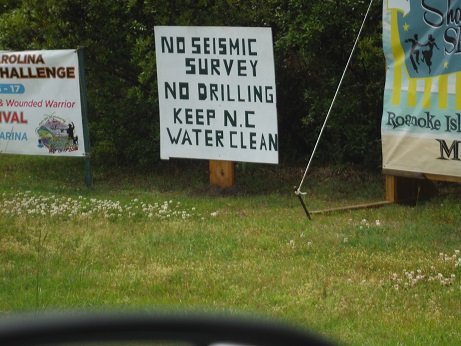 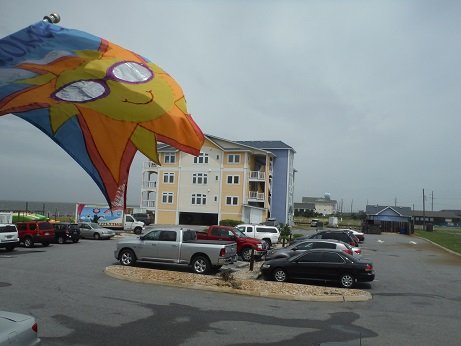 This is serious air. 15m high.

Waiting for the ferryAdd Media, looking back towards the Atlantic seaboard. These overlook the beach 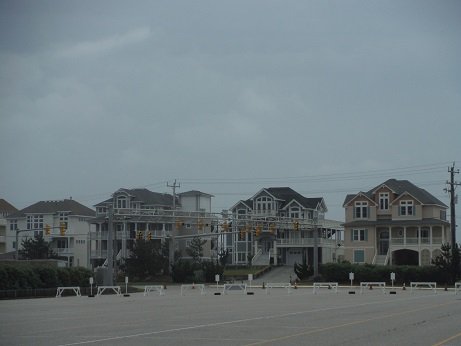 Lots of wind blown shrubs in the water 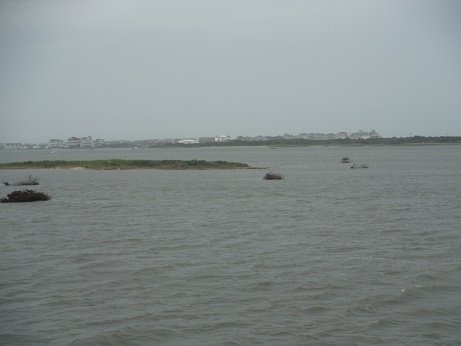 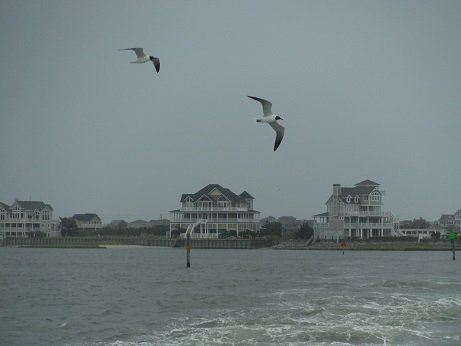 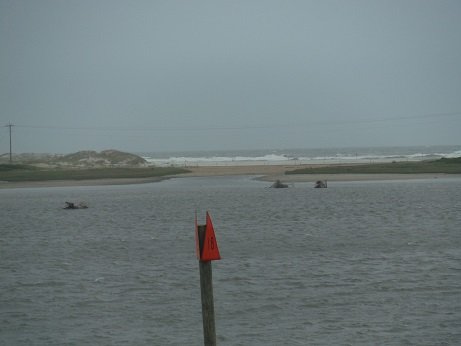 This is the bow of the ferry. The buoy on the left is the channel marker and the post with the triangle on the top is the right channel marker. The new channel is 10ft deep and the ferries draw 5 ft. 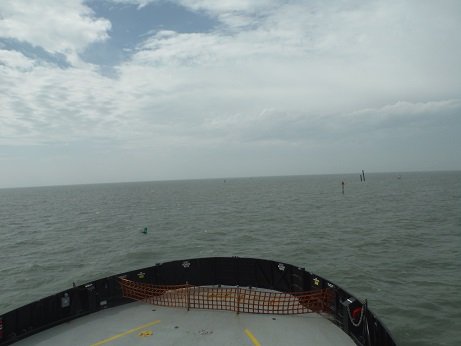