Paddling Up the Lower Mississippi 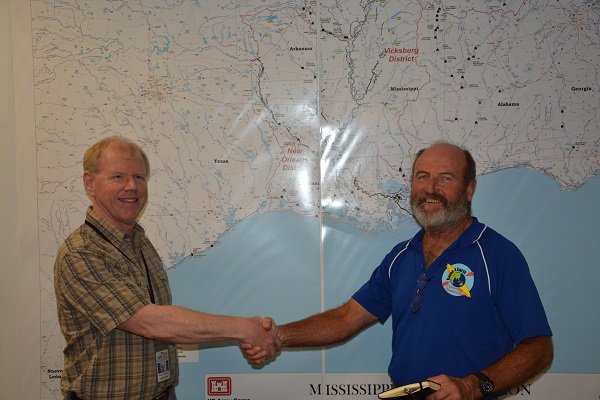 With Brian Anderson at US Army Corps of Engineers Vicksburg

My journey so far has been up the river from New Orleans to Vicksburg, home of the US Army Corps of Engineers who control the river. And control it they do. The sheer magnitude of the levee system and river structures is mind boggling. That said, the engineers are under no illusion about the limit of their control. Even with the mighty resources of the USA, mother nature can still have her way.

The first 280km was bad enough with strong currents and very busy traffic with huge sets of barges and ocean going ships. All the time the river was rising steadily, fed mainly by the Ohio flooding but at that point things turned worse. Thirty percent of the river is diverted down the Atchafalaya River which, as I passed through was 200,000cfs, or about 500,000ML/d. The flow against me then went from 400,000 cfs to 600,000 cfs which in anyone’s terms is a lot of water.

The river is unlike anything we have. It is contained within levees but there are large wilderness areas within those levees. The Corps of Engineers have to keep the river functional for the huge volume of traffic, and they now need to provide sediment to the delta area below New Orleans to stop it disappearing below the water.

We all know and respect the Corps of Engineers but it was interesting to actually visit and feel a little about the organization. Unlike Australian organisations they seem to think that people qualified in the field are best to run the organization so you will find an Engineer, Hydrologist or someone used to doing calculations on the river in the top job. You will also find decisions being made by engineers. The building is like stepping back in time, but to a good era, before the nonsense started about engineers not being managers. Books and maps abound. Technical discussions with managers is easy.

At present a huge hydrological study is underway to determine whether their parameters are still valid and what the effects of climate change might be. My belief is that the engineering has reached a zenith. Massive structures, massive control, engineering might, have all been well and good and allowed the river to do what was wanted but the approach seems to be softening. Environmental concerns are being addressed with care.

The USA, just like Australia, is turning into a drain with everything speeding up. Farmers are even tiling parts of their fields to get rid of water more quickly. The river therefore has a lot more water flowing down it during floods than 200 years ago. We saw in Toowoomba and Grantham in 2011 what drastically reduced times of concentration can do in an abnormal event. Interestingly 2011 also was the biggest flood they have had here.

Interestingly with the river contained within levees, the term “flood” is not used until levels are extreme. At present the river in Vicksburg is up 43ft, about 13m and that is just at the start of flood level. Society has learned to live with river levels moving up and down more than 10m. Fishermen can be seen prowling the treetops in their tinnies on the weekends. Low, medium and high water levels are talked about with the river being vastly different at all stages.

There are many groins on the banks that direct flow into the centre of the river to keep it scouring. The effect of these at high flows can be quite alarming to a kayaker trying to battle up river, even though they are submerged under many metres of water. Here is an excerpt from my blog. I found out later that I was right over a “big momma” of a groin:

The mouths of the Mississippi were smaller here, just licking their foaming lips, but they were there alright and not in a friendly way. A big log jam jutted out into the river. White water rushed past. Not wanting to think about it I paddled hard towards the edge of the log. Crashing into the white water I was thrust 30m into the river in a second. Two seconds it was 50m as the rudder responded. Paddling desperately I had held my ground but only just. I crept back towards the log jam just holding my ground. About 3m out there was a standing wave. That gave me enough to inch forwards. Go, go, go. With every ounce of strength I had, the kayak inched forward. The top of a small tree was 30m ahead and just inside the line of logs. Got to make that. Got to make that. Got to make that. It echoed around my head. The carbon wing blade flexed in the water as I thrust like a man possessed. Past the point of no return I was above the log jam. A broken blade, even maybe a missed stroke and that could be my last. The river was rough, it was ugly and I was bouncing like a cork. This was committed. No way back. The tree under the water started to break the flow, I was winning. Thirty seconds later it was all over, I was through. Tricky was not the word I would have used. It was a bastard! Never, ever again do I want to flex a carbon fibre wing paddle.

It is interesting to combine academic skills with real life observations. For my money the river is getting straighter. At these high levels I see the inside of bends collapsing a lot more than the outside. This seems to be in line with Corps of Engineers goals because they do not want the river wandering, forming what we know as billabongs. It is a commercial river of great economic significance and must fulfill that task.

For kayakers wanting to go upstream the river is very, very difficult. Where there is land it is usually OK with eddies and friction from the bank being of assistance. Most of the time though, the land is a long way back through the trees with water streaming at you. Forty three feet at Vicksburg is as high as this little black duck can cope with. He has no more strength to give.