It is Easter Sunday and we are in limbo. Tomorrow I can try to get a barge to Memphis. If not I will walk.

The river beckons at me. Although Klaas looked at it from the top of the hill and counselled against getting back on it, I have no issue with the stretch that I can see. It is the really bad bits out in the wilderness that are the worry. The lack of land is also a concern and I won’t try spending the night in a hammock in the trees as one group did coming down the river a few years ago. If I can’t get a barge I will walk the next 350km up the highway. After all, the goal is to get to Paris.

Interesting the effects of grandchildren have on one. When each of them was born I felt as protective as I did when my children were born. This feeling consolidated my actions around Climate Change, especially as it was on top of my vow to make a difference every day after I didn’t die in Central Australia in 2006. Their faces now stare at me when I think of the river. What that means I have no idea, but it is useful to remind me that getting to Paris is the goal and winning against a river is not important. The battle is probably ego driven anyway.

Here is an article from the Rivergator.org. It is going downstream but the  effect is the same.

“As you pass the bottom of Racetrack you might notice two man-made monuments grazing the horizon of trees and bluff ridges.  The first is highlighted with an eruption of steam clouds.  It is the cooling tower of grand Gulf Nuclear Power Plant, which is still a good twenty miles downstream.  The other is a congregation of tall cranes, all rising from the same vicinity directly downriver, from here less than five miles.  This is LeTourneau.  It is difficult to ascertain exactly what is going on at LeTourneau, even after you make a close sweep of the site from the cockpit of your kayak or the seat of your canoe.  In fact it is a remarkable venture.  An engineering wonder.  LeTourneau constructs oil derricks and oil platforms for transport to waters worldwide.  Most probably end up in the Gulf of Mexico, but some go to the North Sea, the Irish Sea, and other destinations.  It looks like some kind of crude construction site, like something you might find thrown up on the beach at the start of a war.  But the crude simplicity belies its sophisticated method, borne out of years of trial and error and brilliant ingenuity by its founder, Robert Gilmour LeTourneau (November 30, 1888 – June 1, 1969).

The construction site looks shaky: the derricks are completed on top of giant plateaus of sand that have been arranged along the river’s edge.  This is done on purpose. They slide the finished work to the water’s edge using RG LeTourneau’s big earth-moving machines.  After completion, and employing gravity as an assistant, the derricks and platforms are eased over the edge of the river.  Timing is carefully planned with an eye on river stages.

Known throughout the construction world as, The Dean of Earthmoving, LeTourneau is considered to this day to have been the world’s greatest inventor of earthmoving and materials handling equipment. Few manufacturers of that era had such a profound effect upon the art of earthmoving as did LeTourneau. Just two years prior to his death, LeTourneau recorded his thoughts about the future of earthmoving equipment: “Within the next few years construction machinery will grow bigger and bigger, and more and more powerful. Instead of ‘tons’ of capacity, they’ll all be in ‘hundreds of tons’ and instead of hundreds of horsepower, they’ll all be rated in ‘thousands’ of horsepower. We’re already seeing it in big hauling units in the mines, and believe me, when the contractor and mining companies start looking for bigger and more profitable hauling units and earthmoving equipment, I’m going to be right there, the firstest with the mostest.

This brings the current water level into perspective 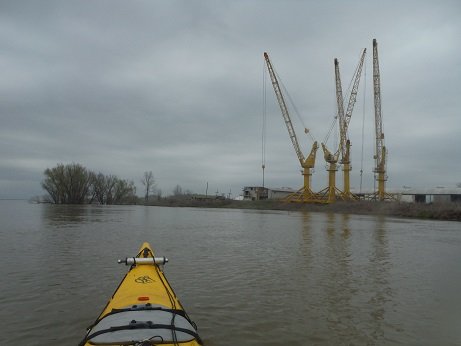 The above story gives some idea of the importance of the river for commerce and indeed the American economy.

Klaas         I’m taking a PHD in parking big rigs, and I mean BIG RIGS. In our present park there are 67 spaces and we have a lot of fun  every afternoon watching new ones come in. Without exception they drive their 50′ monolith units, often towing a small 4 wd car up onto their allotted concrete slab and stop. The passenger door opens and the wife gets out and walks to the back and starts gesticulating with arms and hands. They all have different ways to tell their beloved ones, who are driving,  how to back or drive to the left or right and invariably the communication is not understood by hubby, who than puts on the parking brake and gets out, with great difficulty for a number of octogenarians and the arguments start, sometimes heatedly with language like ;;”I told you a thousand times you stupid cow” etc. Some drivers are so pedantic about parking, they insist it has to be parked right down to millimetres. Than the ritual of “Hooking Up”. First of all the electricity, than the water supply, than the sewer outlet ,than the levelling, than unhooking the tow, than the making up, (not always and I expect a number finish up in the divorce court.). and than, operating the slide-outs and finally ” drinky poohs.” But always inside their rigs with the blinds down ( What would the neighbours think ) Every site has a table with bench seats but less than 5% use them. They lock themselves in their mobile castles and hide, coming out briefly to let their poodle wee. Next day the whole process starts in reverse order. Klaas

WHAT IS A BLOG?

CAN YOU SEE IT DURING FOG?

DOES IT WERE A CLOG?

IS IT FOUND IN A BOG?