After we moved on Tuesday we went off to explore the river. Access points are few and far between so the only point we could find after a good look around was 37 miles from the start. We keyed in the gravel road turnoff on the GPS. It was then about one kilometre off the bitumen and then a walk of about 100m along a boggy track to the river but it had to do.

The next day Lynne and I went to Baton Rouge to sort out Lynne’s phone. That was an all day job, 10hrs actually, but I did buy an AT&T hotspot so that we should have a more reliable internet. I also bought a tablet so that I can tether to the hotspot and use it when scouting the river. Haven’t turned that on yet. 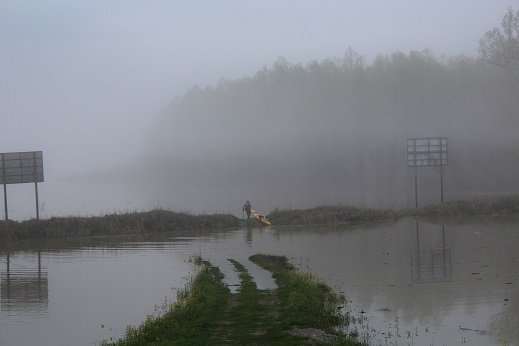 With a bit of trepidation we set off early and I was out into the river and its mist just before 8.00am. After I crossed the little hill, not as high as on the way in because the river was up some more, and was on my way to the river I remembered my sunglasses and jacket. Too bad, time was tight and I was on a mission. 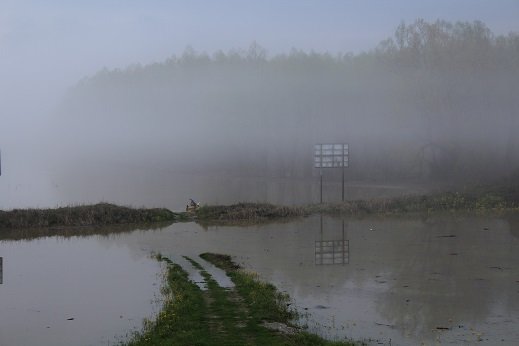 First obstacle was a log jam on a wharf so I had to battle through the petroleum storage tanks on the underwater river bank. There were some fierce eddies around them and then a struggle back into the treeline, slipping backwards, inching forwards, but inexorably heading towards the bank. 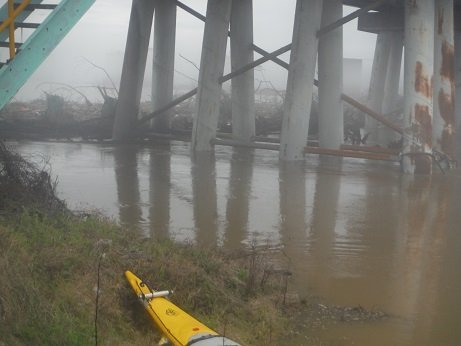 Into the tank farm. Tried the bank but too overgrown. 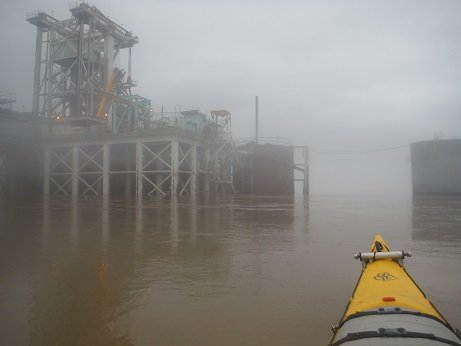 Soon after, at 9.00am, I received a call from radio WGSO990 Jeff Crouere that we had confirmed for 8.30am. Luckily I was able to pull into small tree tops and the interview was fine.

What a spot for a radio interview 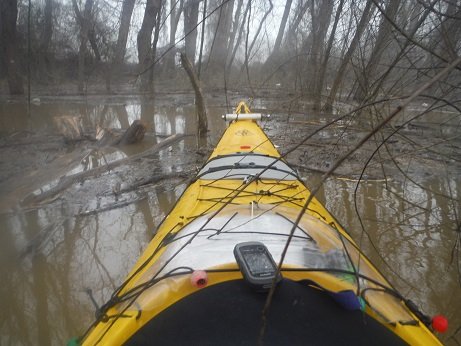 The rest of the morning was pretty straight forward but slow. The flow comes through the trees and they make log jams so the number of rests and eddies had reduced dramatically from previous days.

The river roars and gurgles to the right. To the left it gurgles through the trees while logs and sticks do their twisting, swirling dances towards the kayak. You need your wits about you but it is all fine if you know what you are doing. A novice would definitely be in trouble though.

No idea what this is in the middle of nowhere 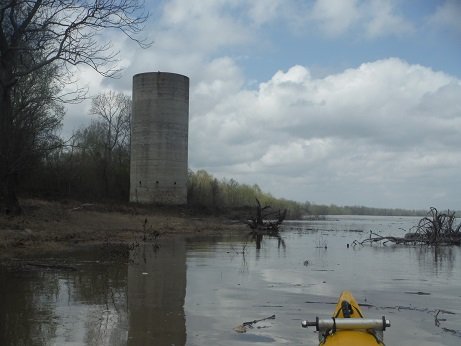 After 17 miles there was a way to get to the levee through the trees. The underbrush was all way below the water, so the levee was visible and I could hear the cars behind it. “Do I stop?”, was the burning question. Given the pick up problems we had previously encountered when changing pick up points I decided that the only thing to do was push on to the point where the crew had actually seen, and was just near the GPS marked road.

At this stage I knew it would be tricky because the going was slow but that was the call I made. About 4.00pm I called the crew and suggested they leave in time to get to the pick up point about 6.15pm. Sunset was an hour after that.

With sunset looming they called to say they were at a point that we had looked at the day before but discounted. After suggesting they go to the exact point we agreed I got a call to say they were lost.

Sunset was gone, dark was descending slowly. I thought I had found a nice eddy but within minutes I was half a kilometre down a river about 100m wide racing to who knows where. It was about turn and rip out of there with all my strength and back to the main river and turn left.

Fifteen minutes later, with a lost pickup crew I decided it was too dangerous to stay on the river so with 37.34 miles on the GPS log I pulled in through about 3m of logs, near a hide and called the crew. My intention was to walk along the track to the hide until I reached the gravel road. The track along the river was flooded so I tried the other one. After about 10 minutes I though I saw lights from a house but no, it was bright fireflies high in the trees.

And then, a pair of eyes was on the track. My headlamp showed a strange animal indeed. It was a bit like a Tasmanian tiger/devil cross, about the size of a bull terrier, mangy colours, long strong snout and a thick tail horizontal, rigid and pointed at the tip. It stared at me but did not move. As it was in the centre of the track I had to go close to get past, my only protection being a plastic water container. Rabies was on my mind as a crept past, but it just stood there and watched me.

Another 10 minutes walking and the track was flooded. I called the crew and sent them home while I made my way back to the kayak firmly lodged in the brambles and then climbed up into the hide.

A miserable night? Yes, but not as bad as it could have been. There was carpet on the floor so with my life jacket as a pillow I was able to get into straight jacket position inside the top of the paddling skirt and in a tight foetal position was able to spend some periods without shivering violently. About midnight it poured with rain so I was very grateful to the blokes who built the hide.

My home for the night. Not too bad but a jacket would have been nice 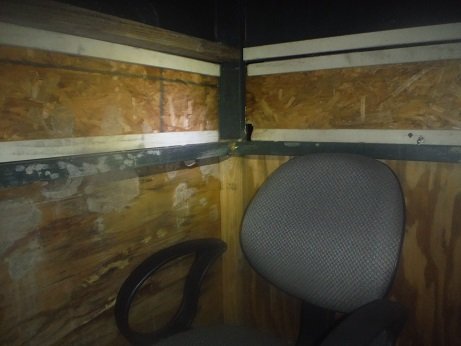 That’s it from the outside 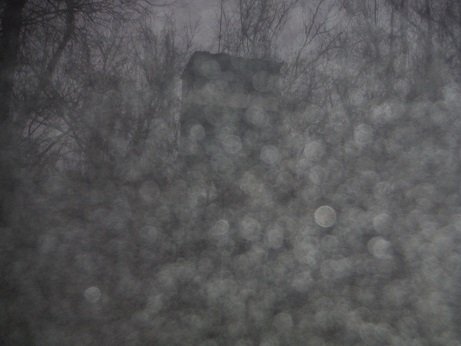 The crew called before daylight and then a number of times until they were in position. When I was comfortable that was the case, I set off to meet them. It was just on two miles in thick fog but after about a mile they heard my shout and Klaas has a deep, booming voice so we were finally in direct communication. Eventually we extracted through the brambles, loaded up at the gravel road and headed off for a shower and bacon and eggs from Le Chef.

To give you an idea, it would have been a lot easier to paddle from Brisbane to Ipswich in one day in the peak of the 2011 flood.

The crew spots me and I pull in 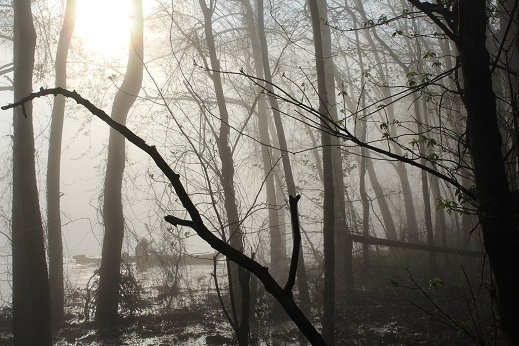 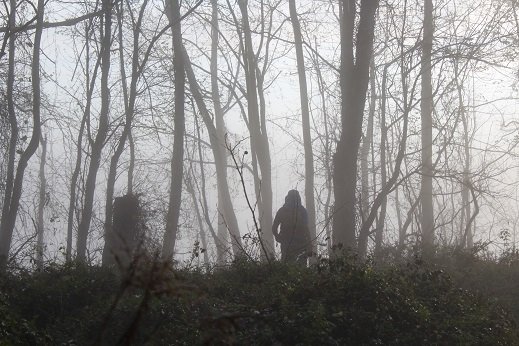 Klaas:   Remember the ATM that swallowed my Visa card? I arranged for a replacement card which came but can’t be used on an ATM. Only for shopping, petrol etc. I also arranged for a cash advance which only took three days , answering the same questions twenty seven times and voila, this morning they (The Visa people) told me I could pick it up from any Western Union office. Looked up the nearest one and off I went. Filled in several forms, was photographed, showed passport, Questioned, and finger printed. With great reluctance they finally parted with the $1000=Aust. and gave me $725= US. Bloody ripper mate, we can buy some Budweiser with that. The Master in the mean time is paddling his …………..off doing something ridiculous like 78 km or there about and the pick up will be done in the dark with torches, something I dont look forward to.Too many hazards, alligators besides, the country is full of fire ants and impossible to see in the dark. Oh how we suffer.

It is early ‘morn, just before dawn

and I am watching the Mississippi

The water is glistening in the dawn

an early tug boat on his way

to push some barges into the fray

of wind and current, eddies and maelstroms

it’s the way of the river, whatever comes

The captain at the wheel,hand on tiller

knows this river can be a killer

flotsam and jettison are a constant threat

the propeller every day  has met

But the Captain is an experienced hand

and brings his barges safe to land.

Lynne:  After a traumatic day yesterday losing steve and searching unsuccessfully for him till well after dark, we drove home in thick spasmodic fog,  very worried and wondering how we could have missed him.  I must take the blame, getting confused re pickup, (Yes i know my family will not be surprised, I can see their reaction now) we are now going to include coordinates as well and i am going to use the old and reliable (i hope, or i will be past history, never to be heard of again  !!!) method of identifying spots with some very bright rope. We left before the sun came up this morning to get to the river when light and were relieved to rescue Steve safe and sound. Very foggy morning as well and the river is a wondrous sight with the fog happening and just the tops of the tugs barely moving. Whilst there had to find a servo as well, being on empty after all our aimless driving.  I chatted to a young guy and his mate who were going frog hunting in the swamps. These giant frogs live there and are caught for…EATING…..grilled on a bbq and apparently delicious, well, I will take their word for that. We also bought two sausage type things called mixed grits, lord knows what grits they were but we both took one bite and hastily spat the lot out, made us shudder.  There are many methodist, baptist and other similar churches abounding, beautifully built. Most have small churchyard  cementaries well kept. Religious messages are popular along the roadside and also on TV. Also country homes have family plots by the home yards, they are quite lovely, I would love to have a wander around if the opportunity comes up. Interestingly, I have not seen one catholic church altho i guess there are some. We find eggs are a brilliant white as snow, all the same size and you can buy the foam egg containers for one dollar. Having a necessary rest day today.  We are all tired out. Still very warm most of the time. Tomorrow should be less stressful at drop off and pickup will be at a bridge with good visibilty and access. .