Bad weather was predicted for the Sunday finish at the Manhattan Kayak club and we were able to hire a boat from the Hudson Sailing School on Saturday so we loaded it with two people from the Audubon Society and two from Environment TV along with Renate. That gave us some good images and footage while I paddled to the finish.

All press releases had 1.00pm Sunday as the finish so it was back in the river, paddle downstream a bit and come in at the appointed time on Sunday. It was sunny with a strong westerly wind, totally different to predictions. The intrepid Environment TV and Audubon were represented but that was it. No other media arrived, even though some had said they would. One Climate Reality person, Katie, turned up and that was it.

Disappointing? Yes, definitely but we are used to that now. You can do almost anything, even be the only person to paddle up the Mississippi in flood but if the message is Climate Change forget media. There are lots of actions all over the place by groups and individuals that are never reported, so we don’t get any idea of what is happening. That will change at some stage but certainly not in the USA any time soon. Charlie and John are both great guys with a huge mission at Environment TV. Check them out and read what they do. Fantastic. http://theenvironmenttv.com/

That’s it for paddling for more than a month. Lots to do like sell the van and car, learn more about Katrina and Sandy, meet people in New York, sort out what to do with the kayak to get it on the Queen Mary 2 etc. You will be amazed when I start to write about Katrina. 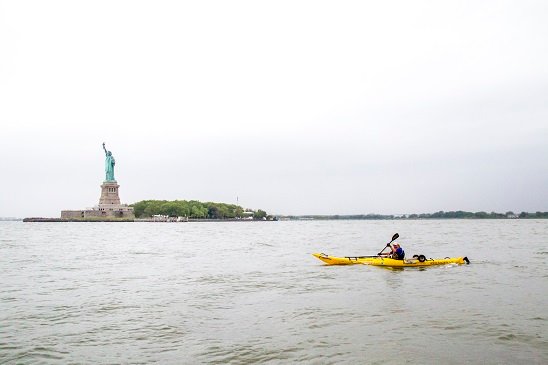 Renate:  Our last camp ground is close to NYC, and at 775$/ month it’s quite cheap. Accommodations are a bit strange: You have to walk through the first shower to get to the second one.

The camp ground is large and filled to capacity, but we hardly see or hear anyone. Are people inside all day? There is the occasional dog yapping in a trailer. One guy is leaving in the morning at 4am, another neighbor is greeted at 6pm by his dog. He tells us about his ex-girl friend and the house they still own, but can’t sell anymore after the housing market busted.

We are appreciating the tarp Steve has hung over our table and stay outside when it rains. But why in the world are we not allowed to hang our towels on the ropes? They want me to put my towel into the dryer after a swim! Seriously?

Renate:  Which rocket scientist designed Penn Station?30 minutes wait time for the train to Secaucus where our car is parked. Okay, it’s Sunday. None of the trains listed on the TV screen show the track. “They will display that a few minutes before” explains a fellow traveller. Strange. “Track 9”. Hundreds of people start rushing in that direction. A long line has already formed at the elevator, so we turn to the double doors (we just discovered yesterday that we have to open these all metal doors to get to the escalator and the track). Several hundred people inch forward to squeeze through, some pulling suitcases. It’s the train to Newark airport. A narrow escalator follows. I am glad to have some space in front of me because I see a commotion down at the end where people step off. Still, I barely make it without tripping or stepping on someone’s foot. A few yards down is another door, not wider than any door at home, causing the pile-up at the end of the escalator. We walk about two hundred yards along the train before entering to have a chance for a seat.

Has anyone ever thought about widening the door frame? Removing the metal doors? Or how about more than one access to a train that transports several thousand people?

I frequently travel by train in Germany. Even small towns have more than one and far wider paths to the tracks. I have I’ve never seen anything like this. This is New York City?? Americans, we need to invest in our infrastructure! This is developing world level. Sorry.