A gentle on shore breeze at Staten Island blew the smog away so that the shorelines across the bay were visible. Sunworshippers lay on the gritty sand beach soaking in the warmth from a sun slightly obscured by high cirrus clouds. From just offshore the Narrows Bridge, spanning the entrance to New York Harbour was visible at the end of the island.

A slight adverse current slowed my trip along the beach but with the bridge looming after 8km, the wind started to pick up and I paddled hard to take advantage of a following breeze after turning the corner into the harbour. The run out tide under the bridge was quite strong but with the sail up and surfing the waves I made reasonable headway.

The Manhattan skyline was straight ahead with the Statue of Liberty just visible. The wind blew directly towards the statue so I straight-lined across the harbour. It was busy but not excessively so. The route was across the line of the Staten Island ferries. A pusher tug with a large barge came out fast from the left and after making some rough waves flattened the seas behind it for a few minutes. A large container ship driven by three tugs crossed my line going slowly to stern. After they reached a buoy in the harbour the two at the stern pushed the ship around 90 degrees, pointing it towards the bridge and the open sea. Finally I was near to the Statue. Three groups of barges, about a kilometre apart and filled with rocks and gravel stood across the line and provided a bit of a wind break to take photos.

It was pretty rough and I didn’t have the spray skirt on but I did soak up the scene. Here I was, at the big apple after coming all the way from the Gulf of Mexico and probably being the only person to have paddled up a flooded Lower Mississippi. There is still a long way to go but this is a big milestone.

Sunday is the big finish at the Manhattan Kayak Company on 12th Ave next to the Intrepid Air Sea and Space Museum. Thunderstorms are forecast but we are now locked into a 1.00pm arrival at high tide.

KLAAS              He has done it. New York, the end of the America leg of the trip. You must admire the silly bastard. Whatever your beliefs about climate change, it has been an epic voyage. First the Australia leg, Walking from Canberra to past Wollongong, tham kayaking to Sydney against mountainous seas and than onwards to America. Buying a  4wd and caravan and then launching the kayak into the Gulf of Mexico and paddling to New Orleans, up the Mississippi against the tide to Baton Rouge, Natchez, to some  80 miles north of Memphis when the river became impossible to negotiate due to severe flooding. He nearly lost his life in a log jam and wisely decided ton buy a pushbike and continue on that to the coast, where again he could paddle and make his way to New York. There has been countless set backs and disappointments but Steve never wavered from the big picture. He almost never lost his great sense of humour and simply carried on. I have great admiration for the man and stand in awe of his physical achievements\.The publicity has been dismal and few Americans seem to care. In spite of all this he never wavers in his commitment , absolutely believes in what he does and I am proud to have been part of this expedition and witness his determination of doing every inch of this so far 4000 odd kilometre epic.

New York New York. The Big Apple. I stood on Liberty Park today next to the Statue of Liberty and admired the skyline of Manhattan. There is something I can’t explain about this city. Every time I see it I feel butterflies in my belly. It’s alive, it is vibrant.

It has never changed. I came her first in 1948 and have been here some eighteen times during my live. It still excites me. The first thing I did was what I all ways do, go to the first delicatessen and purchase a hot pastrami roll, the way only the Yanks do,(With mustard of course) During the next few weeks I hope to do a lot more site seeing, Broadway, do a show, Radio City Music Hall, Madison square garden etc. and then the Queen Mary 2 to England and home end July. By, Klaas.

LYNNE.      Well, a very interesting and exciting day. For Steve it was the end of his journey, tough at times, but both he and his trusty kayak came through without major incident or injury to either one!.  We all congratulate him on an enormous effort. At times he has been utterly exhausted, sore and aching but up and ready to face the next day’s paddling. I am in awe of the hurdles he has overcome, especially in confronting the periliously flooded Mississippi. We celebrated the event with a great meal at Chili’s and a couple of well earned beers for Steve. We arrived at Great Kills National Park on Staten Island, where Steve commenced his last run from the beach. Some sunbathers lolling about, mostly older couples, reading or with earphones on,  smothered in suntan oil. Old bodies gleaming. !! Lifesaver on patrol perched on his lookout tower placed on top of a mound of very dark coarse sand freshly graded for the day. Not a soul in the water for him to watch and not likely to be. We then drove to the pickup point at Liberty Park. It’s a lovely spot with magnificent views of New York city skyline and the Statue of Liberty, she is a very imposing lady. Just as we drove over a bridge into Liberty Park, I pointed out a suspicious looking plastic wrapped and taped  ‘thing’ lying in undergrowth by the bridge. It was the exact outline of a body lying on its side with feet together. We were certain it was a body, so we decided to inform a trooper we saw parked by. He went to look but unfortunately, we didn’t get to hear the end of the story. Oh well, we thought, we were in New York.!!.

Near the end of Staten Island 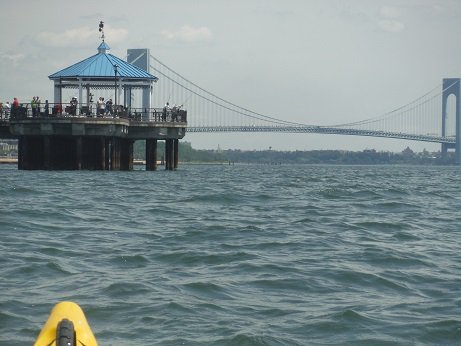 The light sand is a berm that goes the full length of the island and is covered sandbags. It has been constructed after Sandy 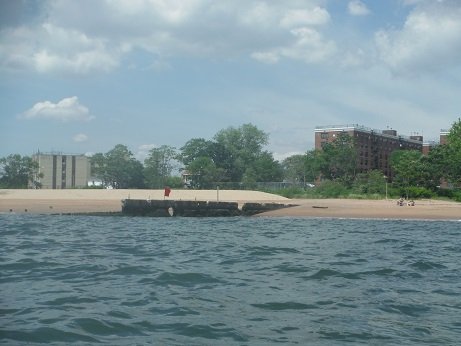 The pylons are steel. Those are riveted plates you can see 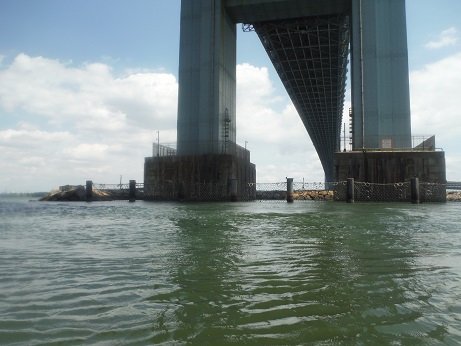 Jersey City on the left, then Manhattan then Brooklyn 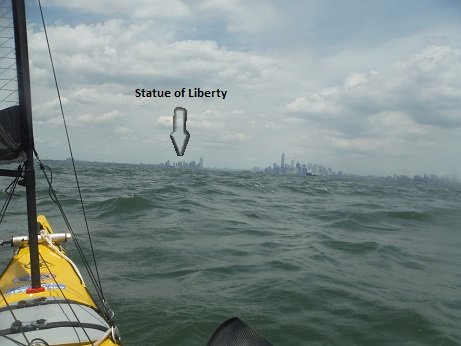 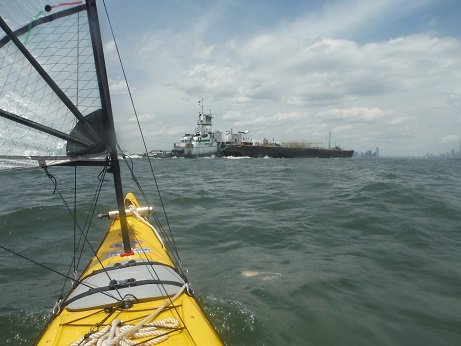 Turning the ship around 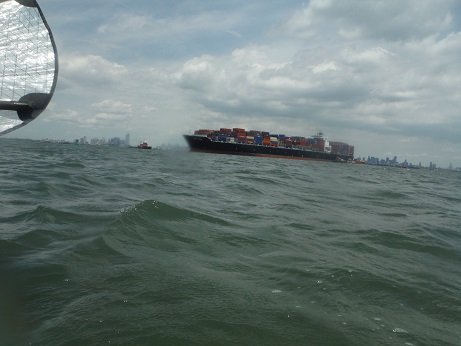 And this says it all 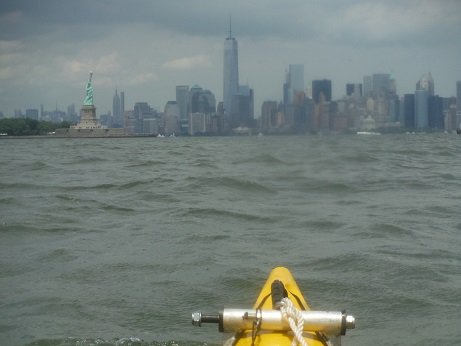