Logged on with Trial Bay Marine Rescue and raced out Back Creek much easier than the trip in. It was very hot and not much wind so by the time I got to Hat Head 25km away I was cooking.

At 9.00am two dive boats headed out to a rock a few kilometres offshore. I could see them but they were too far out for me. After about 10 km I passed a rock maybe 3km off the beach with one runabout and a bloke spear fishing. They passed me an hour later as the wind picked up and they headed towards Hat Head.

Lyn was up on the headland so radio communication went well but it was more than 20 minutes to get back across the footbridge and down to the entrance to the creek so I beat her there. As I approached a stink boat overtook me and sort of headed into the creek. I backed off staying less than 2m off the rocks allowing him plenty of room. He went too far to the right and hit the sand. I thought he would go up onto the beach but no, he was coming up the creek where the tide was running out quite fast and it was a lot less than waist deep. I paddled up, staying well to the left while about eight people grabbed his boat and walked it up the creek which was a pretty good effort. Funny how you expect people to know what they are doing and then find out otherwise. I crossed over in front of them, rang Lyn and then laid down in the water to cool off.

After a feed and lots more to drink I applied sunscreen liberally again and set off for Crescent Head. The nor’easter picked up which exercised my right toe constantly fighting to keep the boat on track down the waves. Crescent looks a lot different from the water to when I used to surf there 47 years ago but some things don’t change and I knew there had to be a creek in the corner next to the rocks. People were everywhere but I missed all of them and paddled through small waves and shallow water up the creek which was knee deep with kids and mums in bikinis providing a neat slalom course.

Lyn back the ute down the boat ramp to just above the water. When I lifted the kayak onto the roof my shoulder locked. It is permanently out of position due to an accident in 2006 and sometimes it gets caught. I just relax and wait a bit before I move it. For the first time someone else saw it. Lyn said it was obviously out of position with a hole in the muscles. It was good to know that because I have always felt like a bit of a sook when it happens. Maybe I could use it as a party trick except it hurts too much. 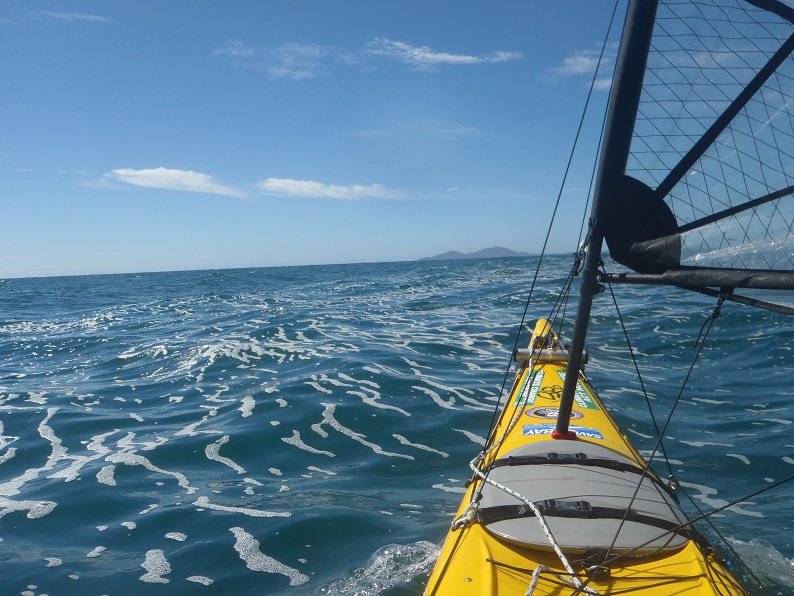 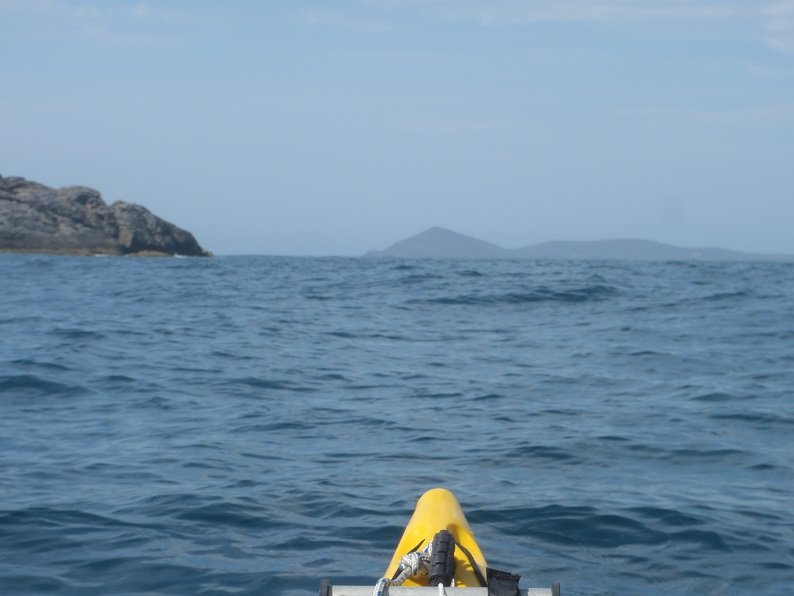 Rock out at sea with Hat Head in background 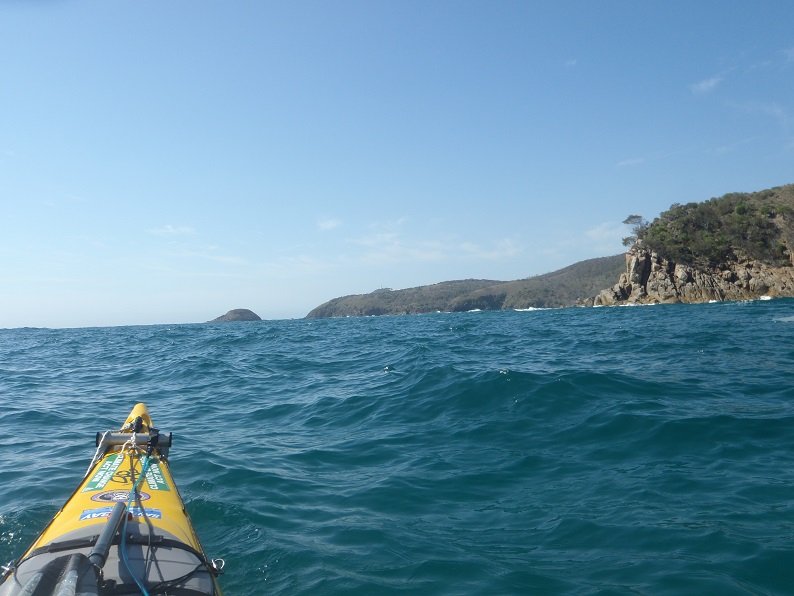 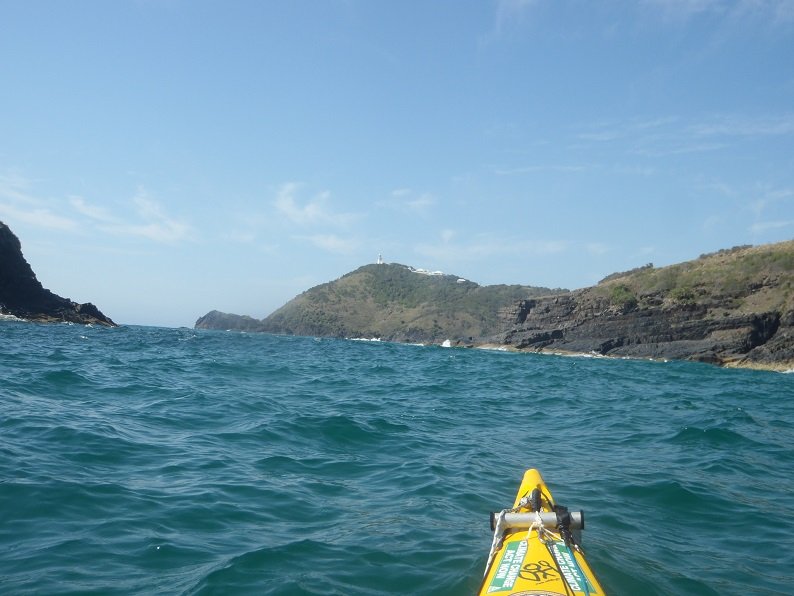 Lyn    DAY 10       Steve left South West Rocks at 8.30am, a late start today. Our first radio call in is at Hat Head. I arrive at Hat Head at 9.30. What a beautiful spot. The bay is edged by well tended dunes; the sign tells me that dune care started in Hat head. As I work for Richmond Landcare as their Schools Officer I also have an opportunity on this trip to observe what is happening in regards to the environment in other areas. The foreshore consist of creamy grains of sand as far as the eye can see. The conditions today are perfect, small waves but fun to ride. A creek entrance meets the ocean at the southern end of the beach, looping around the corner and meandering under a footbridge.

The tide is running out and many people are using the creek as a fun ride. The floats today are varied and at times quite odd. There are many large swans with children clinging to them, a blow up raft the size of a small houseboat with 3 adults and 4 children aboard, as well as the usual array of boogy boards.

I enquired at the National Parks office as to the best way to reach the headland and was informed that I could drive across the bridge and up the road to the headland or I could go via the walk bridge over the creek and follow the path. After sitting in the car for the last nine days a walk along the path to the headland sounded perfect. It was great to be amongst nature again, the path weaved along the lush northern side of the headland. It reminded me of home and the Dirawong Headland in Evans Head. I stopped just before the peak as I learnt yesterday that I need to have a clear line of of sight towards Steve to pick up the radio signal.

I’m sitting on a rocky outcrop amongst the banksias, lomandras and coastal wattle. While below the village and caravan park are wall to wall people, tents and caravans, up here I have only encountered 10 people along the pathway.

Steve is due to radio in at 11.30, it is now 11.20; he is spot on time and going to come in to Hat Head for a break before continuing. I have to scoot down the hill as it took me 20 minutes to walk up. I get to the bottom and then climb into the beast and drive to the creek mouth. I arrive to see Steve sitting on the beach next to Old Yella.

The heat has got to him today, he sits in the creek to cool off. Then he has something to eat and drink to refuel his body.

He has explained that when his body has used up all its fuel he really feels stuffed. He takes food with him, but if the seas are rough it’s hard to stop to get it out. Bananas are a real staple for him, easy to access and eat; one banana gives him energy to continue.

Revived he heads back into the water for the next leg of the journey to Crescent Head. Our next check in time is 3pm.

I arrive at Crescent Head and look for a location to load the kayak. I find the ramp near the surf club, so I park the truck and walk over to an open space to receive his radio call. It’s great I can see him coming in before he calls. I walk towards the creek entrance where he will come in. I hear the lifesavers talking while they look through their binoculars.

“Don’t know,” says his mate, “It’s got a sail but I can see someone paddling.”

“I don’t want to interrupt but I couldn’t help but hear your comments, I can explain what it is.” Other onlookers also listen in.

People are fascinated on the beaches when they see Steve coming in especially when he has the sail hoisted.

Steve radios in and I quietly tell him of the interest on shore. “I better not stuff up the entrance then,” he replies. And he doesn’t!

Hat Head  with the little creek