Hit the water at 7.00am and paddled out past the headland where I had caught many a wave in my youth. In fact one ten footer really hurt when I took off too late and the board dropped away underneath me. I landed on my side on the board which would have snapped a modern surfboard but in those days the board won and my ribs didn’t.

We were expecting 25knots from the north but it didn’t happen. I had the sail down most of the way and just north of Racecourse it came head on. Luckily it was light but the situation made it difficult to keep to the radio sked. The Racecourse area has a headland with a cut right down the middle and what looks like a sunken headland out to sea with a series of rock islands leading out to it. There is a cliff about halfway out that used to amuse some of the Port Macquarie blokes back in my day. Before the wind came up the boys would catch waves and in the afternoon they would swim out to the island and jump off the cliff. I wonder if that still happens.

Lyn was up on the cliff at Point Plomer but she reckoned it was a bit messy to go in. Judging by the headland just to the north I agreed and so had my sandwiches about a kilometer out, drank as much as I could and headed for Port Macquarie. Lyn followed to the end of the point and took some photos. Now that I am a media tart and performer for the camera I went as close to the rocks as I was game to.

There is a long beach down to Port and we had agreed Lyn would go the long way, back through Kempsey. We had agreed 11.30 for the radio sked and Lyn arrived at 11.35 because of all the roadworks. We planned that she would drive down into the southern corner and I would come in near the big rock. In front of the entrance to the Hastings River I could see it was all a lot different to what I expected. The fierce run out tide was directed to the south, not far off the Flagstaff rocks and the wind had become a strong nor’easter. Bugger.

I called Lyn and advised that I would watch and plan so not to worry if I was a bit slow. Waves crashed into the runout stream so I stayed to the north until a set had passed through. With power on and heading towards the rocks the next decision was where to turn right. A huge wall of white water was coming over my left shoulder roaring like a freight train so that made it easy. Go right now, and be bloody quick about it. There were a couple of surfers on my left as I passed to the south of the big rock. The waves threatened to pick us up and dump us unceremoniously but with a bit of back paddling and then full power forwards I was onto the sand where Lyn grabbed the front to make sure I didn’t wash sideways and back out.

I was pretty pleased with the effort I must say. We chatted with the lifesavers who helped carry Old Yella up to the car park and I logged off with Marine Rescue. 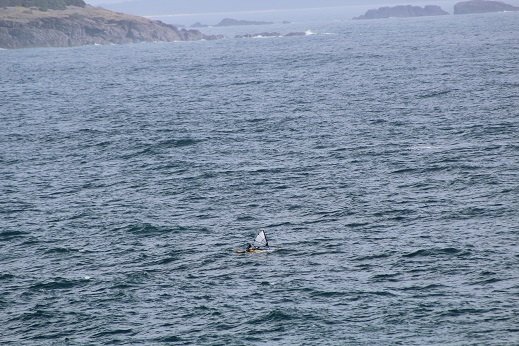 The sunken headland near north of Pt Plomer 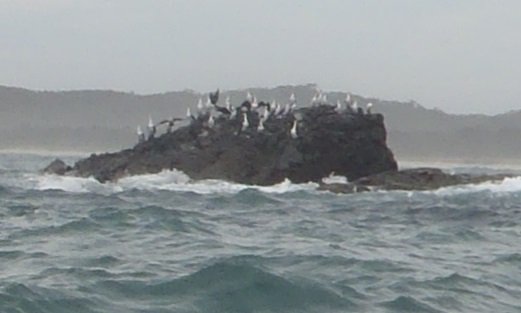 Passing through the sunken headland. Three shags stayed and did not take off. 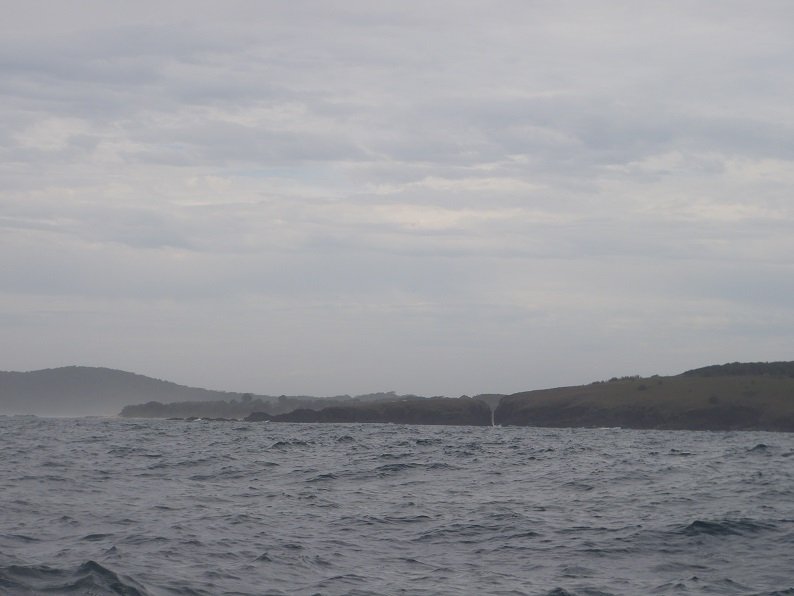 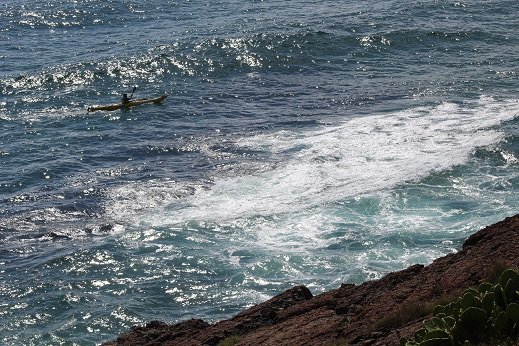 Playing chicken with the rocks for the camera 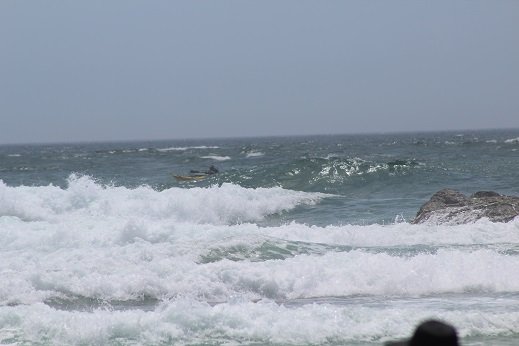 Coming into Port Macquarie. Timing is everything. 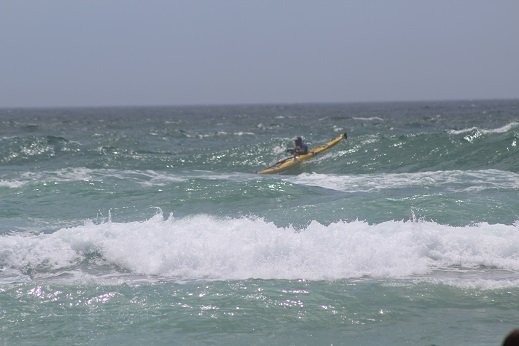 Ok, I think about this but now that the beast and I are friends I look forward to the drive. For many kilometres it’s just straight road running alongside mostly National Park. Then the ocean starts to appear, I stop to see if I can see Steve, but no luck, I continue on the road. Small camp areas start to appear; without stopping they look to consist of approx. 20 sites. There are a few more of these campsites along the way. Then I encounter the bends quite steep with a long drop off over the edge. No problems the beast is responding to my touch, it may not like Steve’s heavy hands after this trip! ✊

When I arrive at Point Plomer it’s overcast and cool, not too many campers up and about. I don’t imagine Steve will land here as it’s pretty rough.

9am “Old Yella to base, over.” The conversation continues between us and Steve explains that it’s a bit rough out there today, hence it’s taking a little longer that first thought. He calls back in at 9.30 and has decided not to come in; wise move I think. He sits off the Point and has his morning tea. I get some good photos as he heads out around the Point on his way to Port Macquarie.

I enjoy writing this blog and my postings on Instagram, it keeps my mind busy helping not to focus and worry about Steve out there in the ocean. While there isn’t a lot of time for sightseeing on this journey, I have still had the opportunity to visit places I never even new existed, such as Point Plomer and Hat Head.

Our radio call is due for 11.30 and it has taken me longer than we thought to drive from Plomer back through Kempsey and down the highway to Port Macquarie; mainly due to the highway roadworks and lower speed limits. I pull into the car park at Town Beach Port Macquarie at 11.35 turn on the radio and call “Base to Old Yella over…” and to his word he is there calling back.

I can see him outside the wave zone, he’s sitting out there watching the waves and judging the tide. Once again on shore I notice the lifesavers observing the strange craft in the water. It’s a hairy ride through the surf to shore, I got some good photos this time. When he gets in the lifesaver on duty comes down and meets him and has a chat. More onlookers come up to have a chat and find out what it’s all about. One lady shows us the local Port Macquarie newspaper and Steve is front page news. The lifesaver on duty organises for one of the other lifesavers to help Steve carry the kayak to the car as no ramps here.

Another full day but a very successful trip. 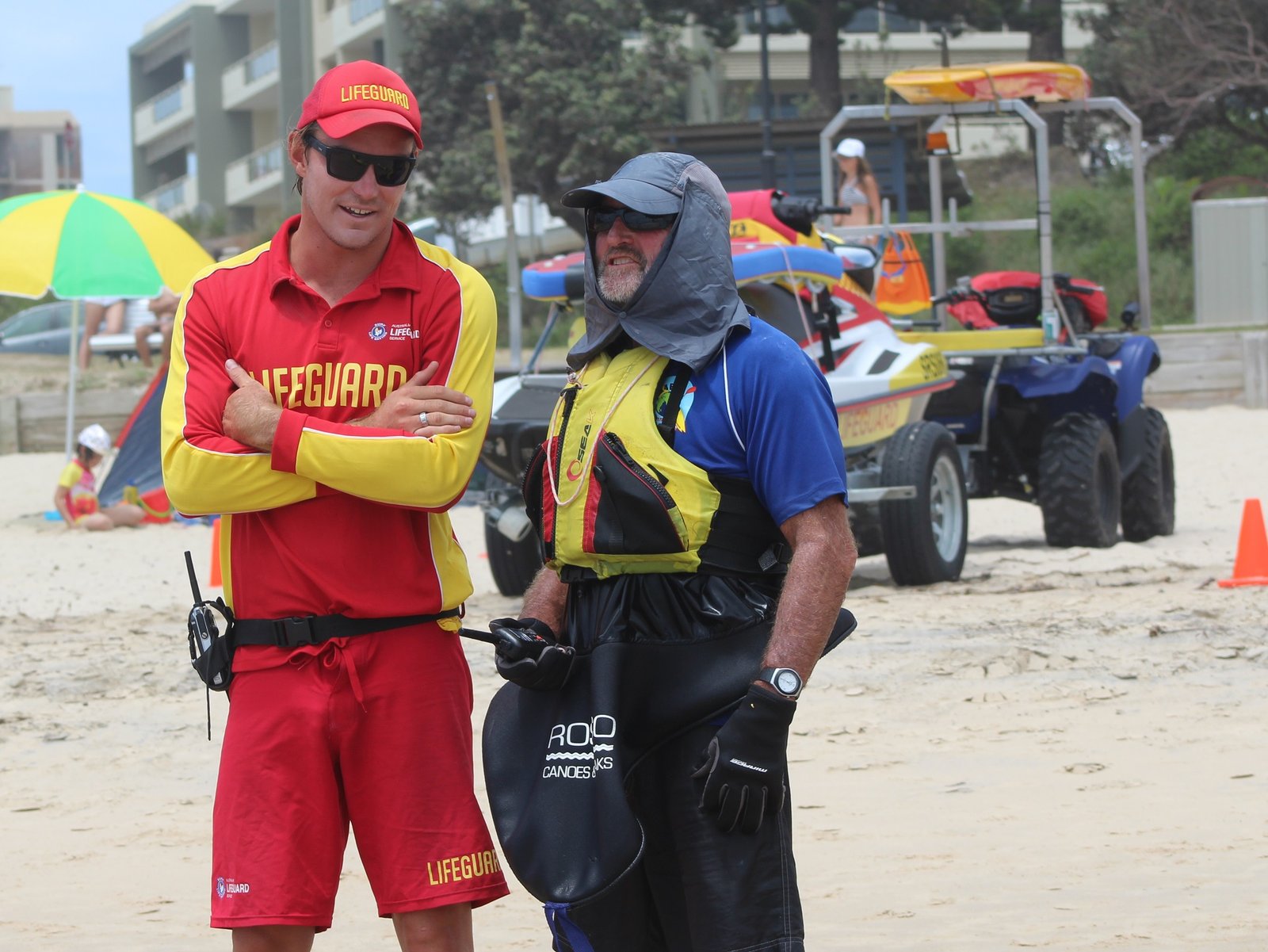 Lyn thinks he is a bit of a hunk. I think we look about the same.