Perfect conditions as I left Nambucca Heads and powered down to Scotts Head. Every 30 seconds or so I would pass a blue bottle right next to the kayak so was pleased that I wasn’t in the water.

Each morning recently I have seen a small black helicopter following the coast which I assumed was on shark patrol. About halfway to Scotts Head when I was about 2km off the coast it stopped and circled about four times. Presumably they had seen sharks and were having a look so I just concentrated on putting distance between us.

Morning tea just of Scotts Head was very pleasant and as I finished the wind started. When I raised the sail both of the starboard stays had come loose. Luckily a long piece was still clipped to the mast at trailed back to where I could grab it. With a bit of impromptu engineering it was nearly as good as new. That was lucky because as the wind grew to about 20knots it swung more east and kept me busy trying to stay on course.

With such a strong wind I was early into South West Rocks. The support crew was checking out Trial Bay and I couldn’t raise her because it was 45 minutes before the agreed time. I called Ch16 and spoke to the Trial Bay Marine Rescue Tower who advised that there is a small creek at South West Rocks that I was not aware of. Thought that would do me so I headed towards where he said it was. The waves were pretty rough so I watched a set go through, followed the back of the next wave right into the creek without getting hammered. A strong runout tide turned me sideways which I am sure would have caused problems for the average bloke but luckily I got sorted before the next lot hit and I used the waves to carry me through the racing tide.

All in all a pretty easy 28km before heading back to Nambucca for the official welcome. That was day 9 and all is going well. The support crew is terrific, the interest from almost everyone has been incredible and I really think we are making a difference. The only thing that I can’t fix is anxiety experienced by Lyn about our rendezvous points and times but we have not had any problems so far.

Morning tea on the high seas

Party over and back to work

Lyn      It’s DAY 9 and I think I have conquered Steve’s 4 wheel drive. Well at least on the road. He has shown me how to put it into 4 wheel drive omg he REALLY trusts me to do that!!

Back to the paddling, Steve launched this morning from Shelly Beach at Nambucca Heads. After a bucket load of sunscreen was liberally applied to his six pack body, next he checked that everything was in order and off he went; ALMOST. He was waving at me and then turned back signalling that he was coming in. Realising there was a problem I grabbed the front of the kayak as he landed. Could you please clip the straps together on the front hatch, missed it and water will come in. This was easy fixed and he then went out into the waves backwards and was on his way, it was 8am. We arranged for a radio call rendezvous at Scotts Head at 9am.

I left Nambucca and headed for Scotts Head. My phone Nav led me off the highway early onto windy roads for many kms. Then I had to sit for 15 minutes at bridge works for the new freeway. I finally arrived at the rendezvous point at 8.55. I called “base to Old Yella” no reply  After a few more attempts I decided to wait and call again at 9.30. At 9.30 I heard “Old Yella to base” greatly relieved I replied. However I couldn’t see Steve, he said that he was right in front of the headland and I should be able to see him. He described what he could see and thought he saw the truck, then he said there is a bus driving up the road near you. “No buses near here.” It turned out that he was in front of the headland around the corner from where I was.

We talked about his guesstimated time for South West Rocks, he said I’ll call in at 12noon and let you know how close I am. Off I take again and I get to South West Rocks at 11.15, I had time to spare so firstly I checked out South West Rocks but it was pretty messy. Secondly I drove out to Trial Bay and found it much calmer and beach access to load the kayak. As it was nearing noon I headed up to the high point next to the old jail, at noon I called Steve …. no reply. It was pretty rough out in front now, I kept calling. Then my phone rang, it was Steve “I’m already in.” The wind had changed to east north east and he had been able to use his sail.

Not the best day; for my anxiety levels but the main thing is that he had arrived safely.

DAY 9 part 2            We returned to Nambucca Heads for a planned entry into the river. Another well attended event, this time organised by John Vernon, from the Greens. In attendance were Justin Fields, MLC Jeremy Buckingham MLC, two councillors, local elders and numerous interested attendees.

Once again we have been astonished by people’s generosity, the local Greens conveyor Matthew and his wife Carol offered us the use of their recently vacated house on their property.

Thank you to everyone from Nambucca/Bellingen Greens for a great event and for the pages of signatures for the Climate Emergency Declaration petition.

One more thing Happy Birthday to John Vernon whose birthday it was today. 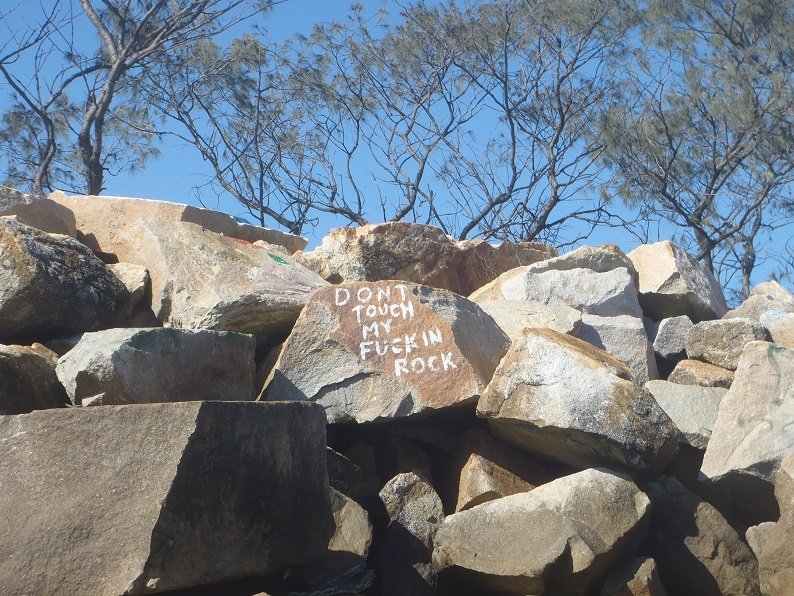 Waiting near the wall at Nambucca. It is covered in graffiti on the top. Lots of colour. Can really only see this one from the water though. While waiting I saw a 2m bull shark cruise into the river and later four dolphins fished near me. Uncle Martin, who did welcome to country, reckons bull sharks don’t bit black fellas. Put us both in the river with a bull shark though and I reckon he might swim faster than me. Gave him one of my tee shirts, told him it was a large but it is actually a medium. Should help with weight loss incentive though eh Martin…hee hee. 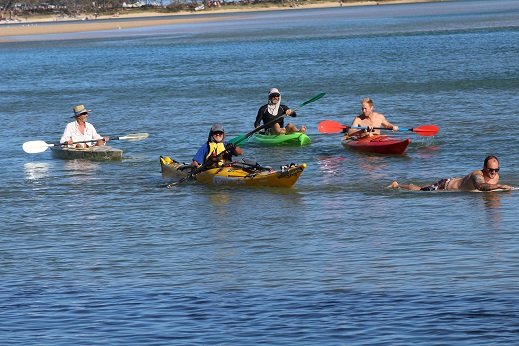 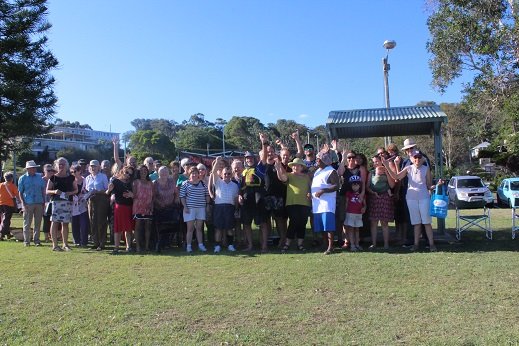 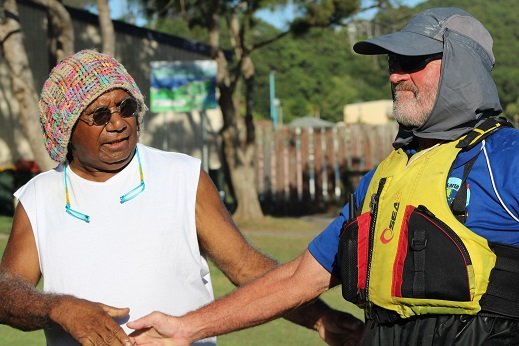 Welcome to country. Lyn told me to take the hat off but I forgot 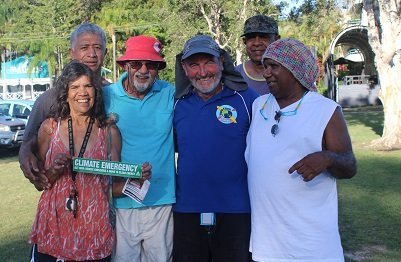 The only names I can remember there are Tu & Martins (and mine) but they are the Gumbaynggirr Elders. I think they have to keep a rein on Martin which would be a full time job I reckon. 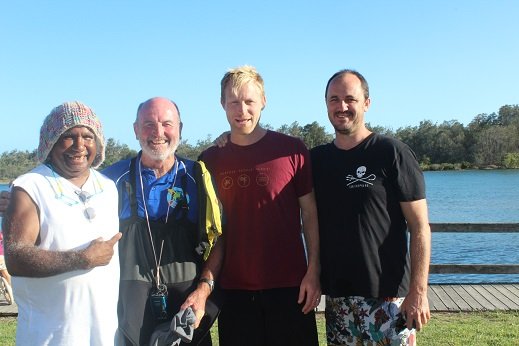