Up at 4.00am for 6.15am start at Camden Haven. Forecast on Meteye was for strong northerlies. Winds turned out to be variable and often on the nose at about 5knots so progress was a bit slow. The day warmed up and I cooked. Then the Thai from last night wanted to exit but had to stay there for another 2 hrs of discomfort. Into Crowdy Head, a fabulously easy harbour and ramp after 4hrs 15mins and 26.5km on the log

Back to Port for the final official work where the kayak with its sail up at the markets attracted signatures. Apparently crowds were down to less than a third due to the heat. Finally a few photos on the water with a storm looming and then back to camp to see how everything worked in the rain. All good. The support crew is happy. Last effort, at Wooli, the support crew accrual said a rude word. Sure we had a bit of rain but it was only between 2 and 3 inches. Sure the mattress soaked up the leaks but I did put a space blanket over it so she didn’t have to lay in a puddle. Sure the floor might have been muddy and water was flowing down the sides of the gazebo and across the ground, but my back pack was soaking up most of it. Sure the umbrella blew away and turned upside down but I did then tie it down. But to swear….. 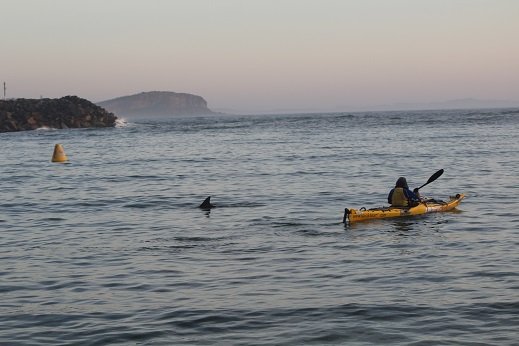 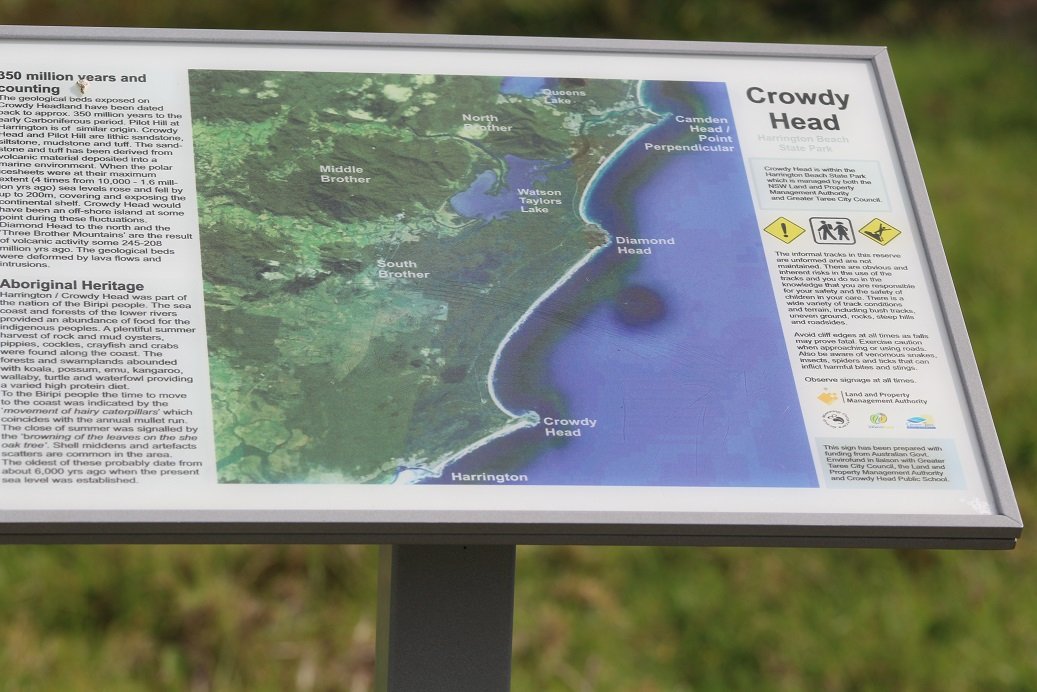 Not sure this worked it is hard to read on this 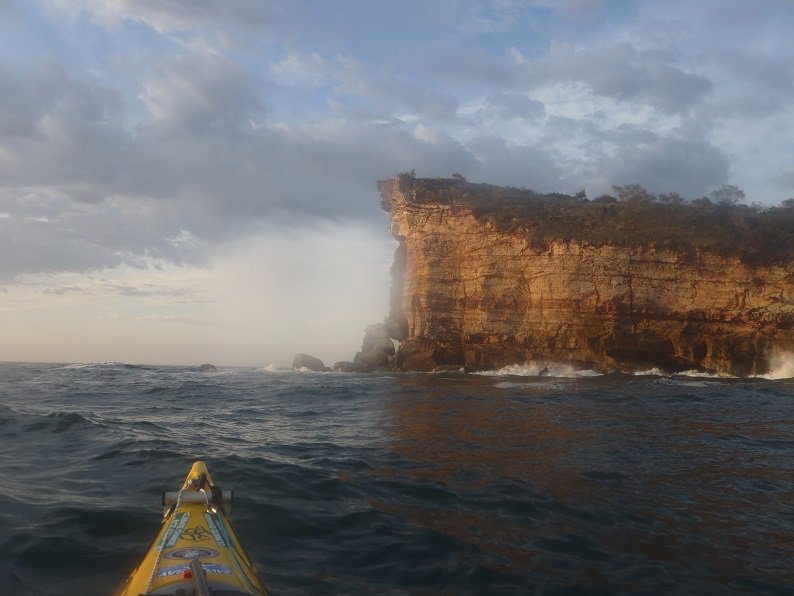 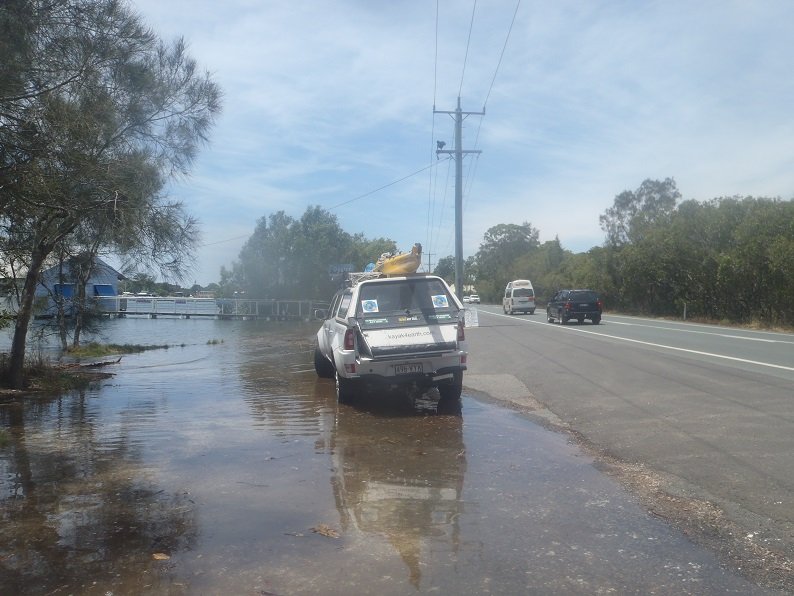 High tide on our way back into Port Macquarie 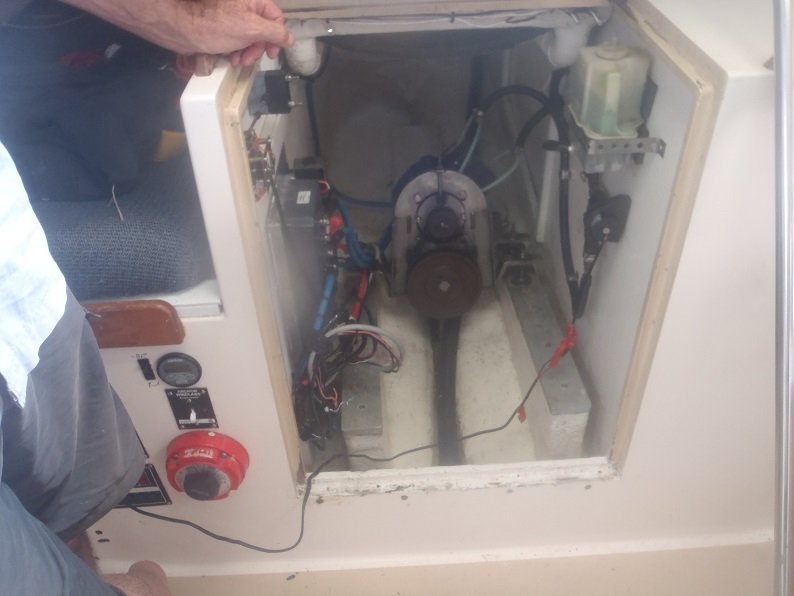 The electric motor on Stuart’s yacht. You can see where the diesel engine was. Same weight with the six batteries but no need to take 150L of diesel 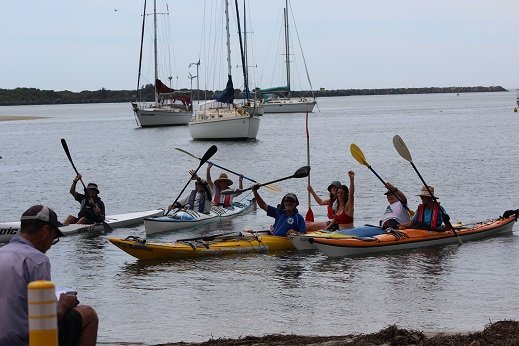 Paddlers practicing to be media tarts 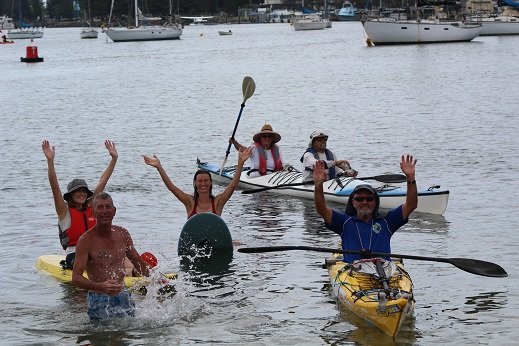 There is a big dog under the splashing 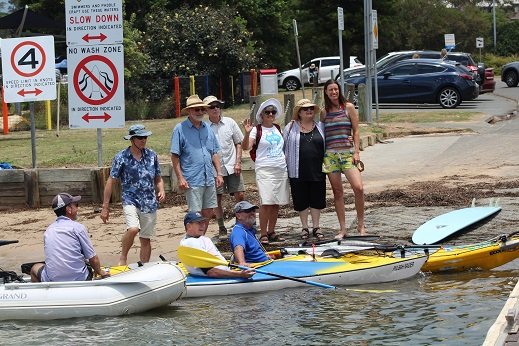 The approaching storm is behind them

Lyn      Very early start, up at 4.00am.  We have to be at a 1.00pm flotilla event for the local Climate Change group, waiting until then to head onto the next leg is fraught with trouble as a southerly is predicted. So the decision has been made to set out really early and paddle to Crowdy Head, arrival time at Crowdy is estimated at approx. 11.00am. This will give us time to be back for the event. This is a risk but hey Steve is all about risks and he says. “This is hardly a risk.”

As an aside I am pleased to report that the beast and I are now comfortable driving up onto footpaths, navigating through large boulders, in search of close access to beaches to load the kayak, and reversing down boat ramps is a piece of cake.

6.10 Camden Haven – What an exquisite morning. Just a wisp of breeze, calm seas and the sun is sneaking over the craggy rocks of the break wall. Steve is ready to shove off the beach, as he heads towards the bar crossing a lone dolphin appears and accompanies him out of the Harbour. It’s special to share these mornings on our journey.

While Steve explores the ocean and interesting sightings along his journey, so do I on shore as I explore the many and varied coastal towns that I encounter. The towns or villages are similar in many ways yet varied and unique in their own way. There are often two parts to these towns. The original beach houses, now dated but still in demand. Then there are the oversized and often overstated new beach getaways. Then there are the towns where both are mixed together in harmony. Perhaps these towns are a metaphor for life itself?

8.30 I’m sitting in the shade of the Crowdy Head Lighthouse enjoying my morning tea. Steve is due to radio in at 9.00. What a place for a cuppa! Not another soul around, only a friendly young magpie wanting to keep me company. It begins to sing and moves closer and closer. After a short while two more magpies join us; they also begin to sing. They remind me of my sister who loves magpies and has many who visit her home. I manage to take their photo, they are not shy at all.

The ever present black helicopter appears above us, it circles the Lighthouse searching both the southern and northern bays each side, satisfied it moves on.

Steve calls in and the wind has turned more south and he is not making the miles he had hoped for. He says he will call again at 9.30, he does and then his next call is 10.00.  He says he is getting close, so I head down to the Harbour. He comes into the Harbour at 10.30.

We head straight back to Port for our arranged meeting at the Westport markets with the Climate Change group, who are holding a stall. We arrive at 12.15; Steve sets up the kayak and it helps to attract people to the stall. The group are collecting signatures for the Climate Emergency Declaration.

After the markets it’s a final gathering on the water with various water craft and it’s farewell to Port Macquarie. 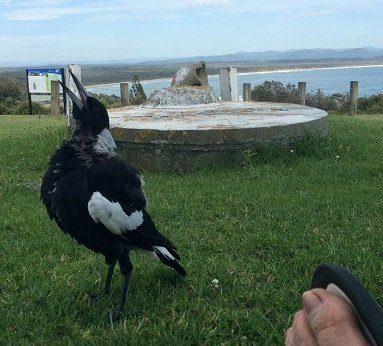 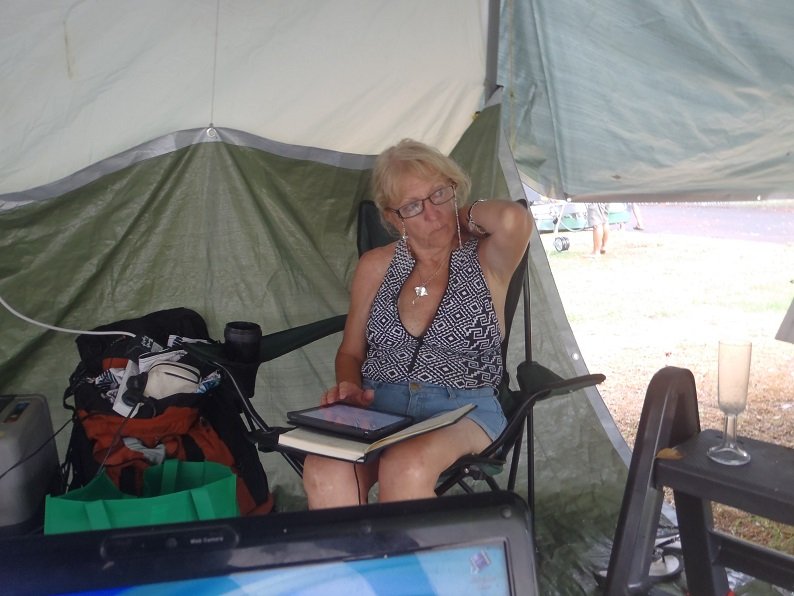 It is pouring with rain outside. Snug as a bug in a rug the support crew contemplates the next words of her blog or maybe why her slack partner has not topped up her wine glass.