Packed up camp in the rain and headed for Taree. Big4 caravan park at Tuncurry had a powered site available – $90 per night less 10% club discount. Decided on a motel in Taree for a bit more. Sitting at a real desk drinking a red, contemplating 49km to Forster tomorrow and thinking about where we all are at with delivering the facts.

It seems to me that the more multi-pronged the better. Lyn is much better at peaceful persuasion and is more tolerant. That doesn’t mean that a bit of confrontation is wrong though. A bully must be confronted.

The following email this morning is from a brave man.

I have learned of your kayak 4 Earth campaign, culminating in delivering a petition in Canberra on the climate emergency.

I agree we have a climate emergency, but I do not fully agree with your statement that “for people under 20 now the effects could be catastrophic, not just the wild weather we are experiencing with just one degree of warming.”

Unfortunately, I think catastrophic effects for many are already happening, contributed to by climate change and a range of other “risk multipliers”.  Partly for this reason, I became the first, and to date the only Australian IPCC contributor to be arrested for climate disobedience, protesting coal exports at the Maules Creek mine.

I do hope the decision makers in Canberra hear you, but I think real change can only come from enough people recognising the peril we are in, and changing their behaviour; not just regarding climate change but in a host of other ways. Your unusual mode of reaching Canberra may attract some interest from mainstream as well as social media. I hope it pays off!

At Port Macquarie I spoke about bravery and I have met many brave people. Anyone who confronts their demons, who can recognize they were wrong and change their ways, who can see a really hard road ahead but still travel it because it has to be travelled, is brave.

So what is the opposite to this? What is someone who will not accept science because it does not accord with their beliefs? What is someone who so badly wants to preserve the status quo because they have a comfortable life style supported by corruption and special interest? One of these people used the words “girly man” in derogatory comments about his political opposition. To him and to all of his neo-liberal mates who are prepared to sacrifice the lives of my children and grandchildren, I say you are cowards. That is not a nice thing to say but I can’t see it any other way. Their abject cowardice places everything as we know it at risk. 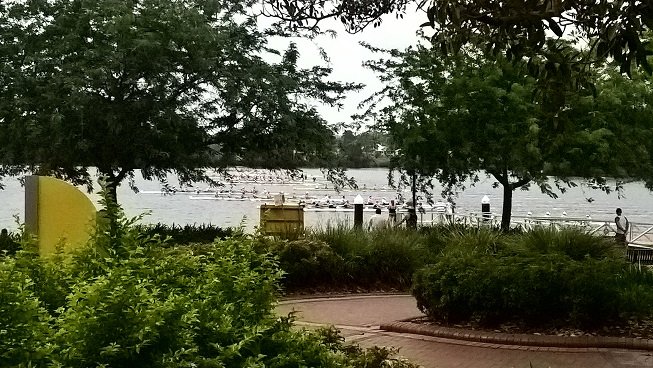 Waiting to go to the Taree motel we saw a rowing carnival. To anyone who has watched kayak, outrigger or dragon boat starts please spare a thought for the starter here. He had 14 eights to line up. Took him 20 minutes!