Headed out of Crowdy Head at 7.15am with the heat already building. Rounding the headland a light south westerly ruffled the surface and cooled things a bit. Showers travelled with me but they were about 20km inland and no amount of thought control could get them to come over and cool me off.

Passing Harrington I looked again at how one might get into the Manning River but as in 2008 it eluded me. Waves broke all along the beach. There is a rock wall which probably was a northern breakwall at some stage but it just goes back to the sandy beach.

It was quite misty so it took a long time to be able to see Black Head and when I got there at 1.00pm I could just make out the buildings at Forster. Luckily a light nor’easter maybe 8knots allowed the sail to go up and stay full of wind. By the time I got to Foster at 3.30pm it was blowing properly and propelled Old Yella up the racing out tide.

The distance at the end was 48.5km and I was buggered – couldn’t walk properly and my body hurt. Luckily masseur Lyn found the knot in my back and sorted it out with deep heat and a shower. All in all a very satisfying paddle even if things started to seize up when I finished.

Oh, and by the way, it was a three shark day. One about 1.5m, one about 2m and one big one that did send prickles up my back. 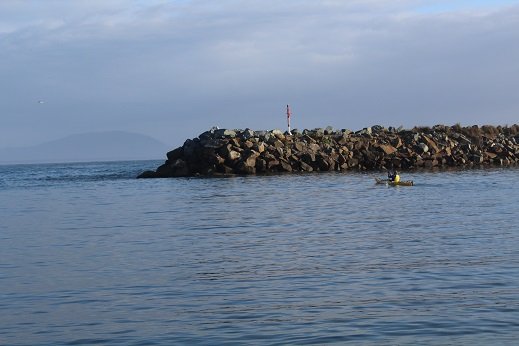 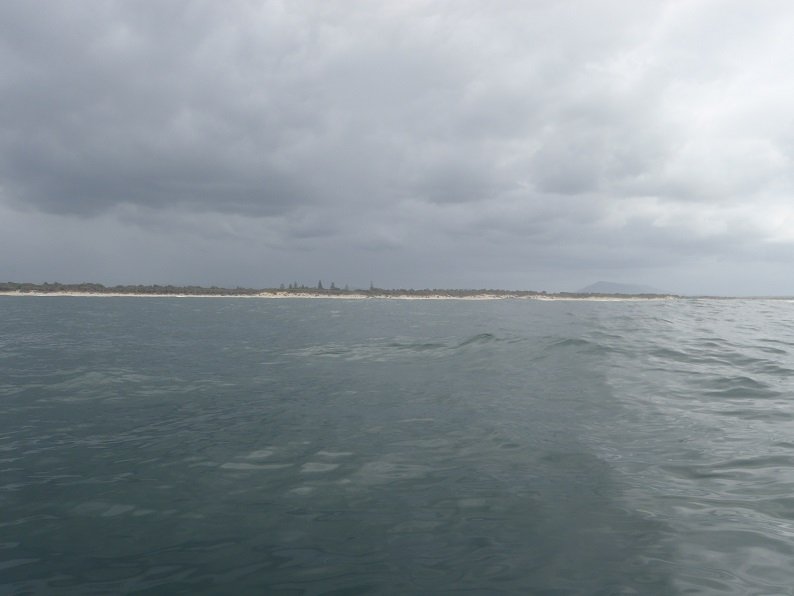 Harrington with North Brother in the background. Over here rain…please! 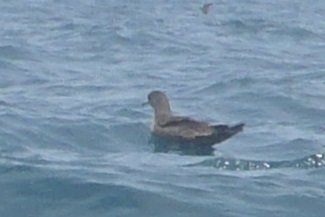 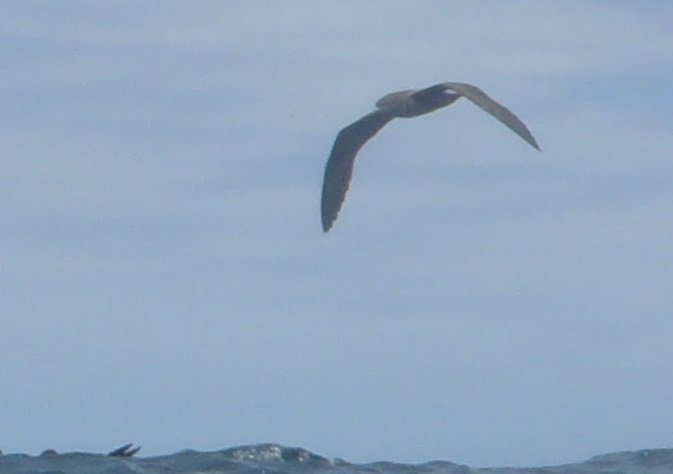 Would love to know what these are. There are hundreds and they spend all day either sitting on the water or skimming along just above it. 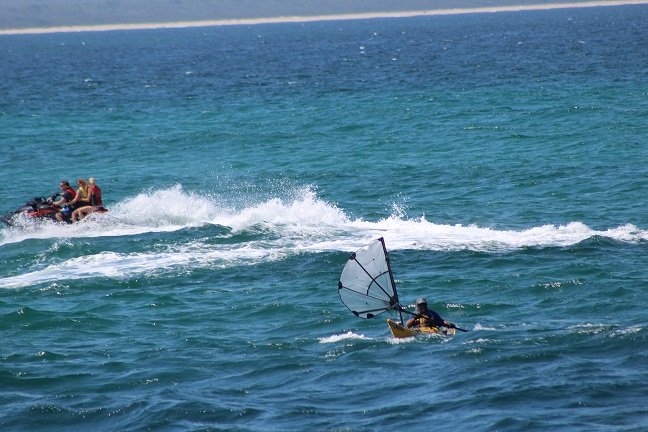 I needed the gun again. Can we have a season when we are allowed shoot ’em? 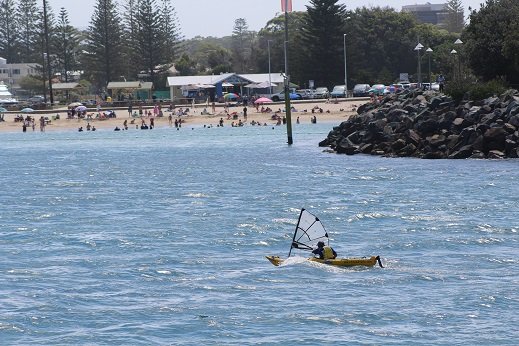 Safely in at Forster Tuncurry

Lyn     DAY 15     The southerly came in yesterday right at the end of the get together at Westport Park with the local Climate Change group. We packed up the kayak and headed back to camp, not sure what we would find. Good news, Steve’s big tarp had done the job! All was dry he backed up the truck and rearranged the tarp and once we were settled inside we were very cosy.

It rained most of the night and was still raining in the morning. As the southerly was still blowing there was no paddling. So we packed up camp and headed for Forster, however the camp sites at the caravan park where we wanted to stay were over $80 per night. “Lets re think this.” Steve said.

So he searched the net and came up with comfortable motel accommodation for $115 at Taree, which is still central for the next three days paddling. So here we are once again drying out at another motel.

In the afternoon we found a spot for a quiet drink and then noticed that there were races on the river in front of us. It was quite a large race between rowing eights, there were 14 boats stretched across the river. It took some time for the officials to get them started. I noticed a couple at the same bar who seemed to know what was happening, so I sidled up for a chat. It turned out that they were from Mosman Rowing Club and the Lady, Linda Read was the junior rowing coach.  After an interesting chat we returned to the motel. We enjoyed a quiet night over a couple of glasses of wine, hence why this blog didn’t get written yesterday!

DAY 16     Back to Crowdy Head for today’s start. We have a routine each morning before Steve sets off, so we thought it might be interesting to film the procedure. Might I say here that Steve is no Russell Crowe when it comes to acting, although when he got lost in the skirt it did make me laugh.

We varied our usual routine today of regular radio checks. As it has now been a couple of weeks since the holidays commenced most of the media networks returned to work today. Along with the Sydney event organisers I set about making contact. I also had another couple of ideas for a quirky promotion. More on this later.

Sometimes Steve can’t make radio contact with the Marine Rescue towers for various reasons, so once he is away I will ring them and they then log him on and note his destination and arrival time. As I have previously stated . Marine Rescue have been great along the way. Today at 7am I spoke to Aron at Crowdy Head, he was keen to get all the details correct. Marine. Rescue don’t often get a kayak logging on. Then later in the day, 11am Aron rang me to see if Steve was ok, he was just checking and then was going log Steve over to Forster.

Steve had a big day, 8 hours paddle in the heat.