Lyn took a video as I eased out over the bar at Forster into a glassy blue pacific at 7.30am. You follow the cliffs east so the sun was in my eyes but only threatening to be hot at that stage. By 10.00am it had made good its threat and by 11.00am I was roasting again.

The GPS died at 10.00am. Cheap Varta batteries last maybe three days but I change them at two. They have been very dependable for me around the world. They ran out so I bought Eveready. Silly me for not changing them after a day. Funny how attached one can get to a GPS. It is sort of like a companion. I only use speed, average speed and distance travelled. I missed it when it died. Probably nothing like I am going to miss my support crew next week when she goes back to work though. Luckily she is coming to the Opera House. I know we should not fly like that but bugger it. We don’t fly for pleasure or holidays. With a son and his fiancé in Canada I have also decided even though it is wrong, that I will fly over occasionally to see them. No excuses, I’m just gonna do it. Funny how a lot of people call themselves environmentalists and then fly overseas for their holidays.

A kilometer off Charlotte Head the waves reflected back making smooth peaks with the easterly swell. It was scorching. For relief I would take my hat off, fill it with Pacific water and tip it on my head. The cool water would run down my back but in five minutes my head was baking and my body steaming. Temperature was in the high thirties and vigorous exercise in a shirt, a sheet of plastic (that’s the skirt) and a life jacket makes one think of removing some of it. But you don’t. Shit happens. It is called shit because it happens when you least expect it. I have been caught before paddling down the coast so I make sure that I am always ready.

I paddled on. A big splash of white water materialized ahead. What’s that? A small marlin launched into the air ahead of it, and then again and again. Maybe it was enjoying a brief sauna. A large group of the brown birds sat on the water to my left. I tried taking photos as some took off and skimmed past me. The group grew to maybe a hundred and then splash. A group of dolphins came toward the kayak. There were about ten of them swimming beside me, in front of me and rolling sometimes to show their light bellies. I was exhilarated and shouted with joy as I raced along as fast as I could with them. Gradually they changed. They popped into the air in front of me steering me to the right. I changed direction. Up ahead to my left a great commotion was occurring in the water. When the dolphins were satisfied that I was headed away from it they disappeared, heading in the direction of the commotion. I must say that it made me a bit emotional. It all took just a few minutes but wow!

The wind came up just enough to raise the sail but coming into Seal Rocks I had to take it down again. It is more of a hindrance when paddling faster than the wind. I beat Lyn to the beach, paddled in behind the biggest wave I could find and beached. Gracefully I stepped out of the kayak, fell over backwards and the kayak washed back down the beach onto me, filling with water before I managed to stand and drag it out of the waves. 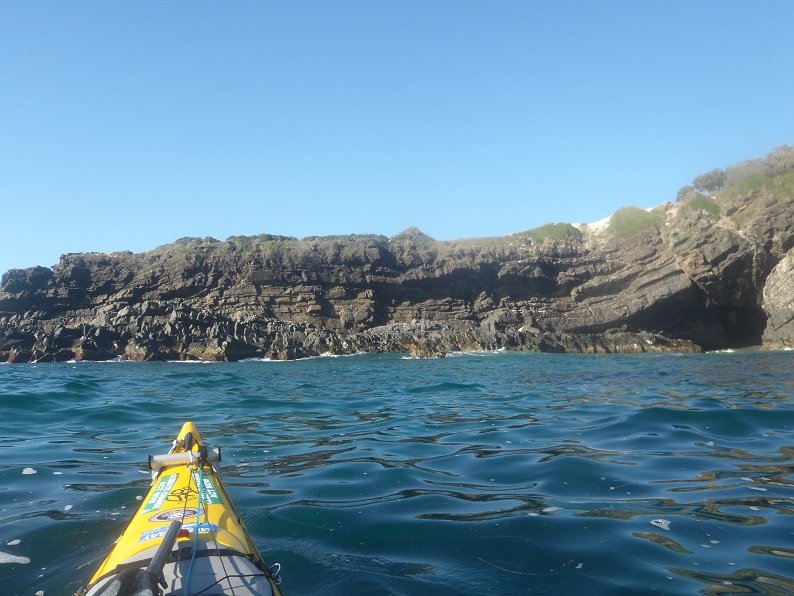 This is in Forster. There is a big sandhill behind the cliff. You can see the top of it. Would love to be there in a big southerly and watch the plume of sand blowing over the top of the cliff.

Look at the folds in the rocks. They have been there for millennia. See the houses behind the beach, a civilization with a very brief history. How long until the earth moves on and discards it?

Gotta look closely here. This is the first lot of brown birds. There is one skimming along midway between the horizon and the bottom of the picture near the centre of the photo 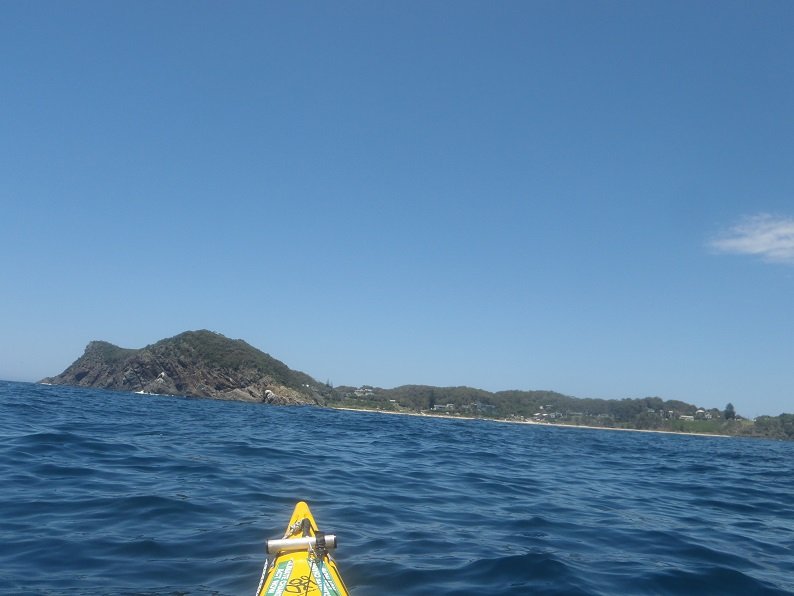 Seal Rocks. A once sustainable fishing industry destroyed by the trawlers who dragged everything and turned the bottom into a desert. Greed prevails.

It all started at Forster at 7.30am. There was a gentle but consistent roll as boats approached the bar.  Steve was still a fair distance back, not long having left the boat ramp. I parked the beast and walked out the wall to get some photos of him crossing the bar. I watched as the cruisers approached the bar. It was their sound that I noticed the most whoosh…ker-thud.  Whoosh…ker-thud as they rose and fell with the waves. Then one cruiser increased its speed and lifted up and planed over the waves, rather than slop about. Meanwhile Old Yella approached, he silently rose and fell with the waves as he cut his way towards the bar.

“Where’s he off to today?” I’m asked by a gentleman also watching Steve cross the bar.

“I bet he’s enjoying it.” He comments.

“He will unless the southerly hits.”

Steve crosses the bar in front of us on his way to Seal Rocks.

It’s almost 1pm, radio check in time and I should be at Seal Rocks by now. It has taken me longer to drive there than I expected. I see a sign on the right that says picnic area, I pull in as I can see a sand pathway. I think to myself that if I walk out the pathway to the water I may pick up Steve’s radio signal. As I am pulling into the parking area my phone rings. “Where are you? Did you get lost?” Can’t mistake Steve’s voice.

He’s already at Seal Rocks, been there for half an hour he tells me. I’m usually at our check in spots at least an hour early, the one day that I’m late he’s EARLY.  No problem he says I’m just relaxing and catching up with the locals getting some inside knowledge for tomorrow’s paddle.

“Ok I’ll see you soon.” And I set off towards Seal Rocks.

Some days just get worse. It takes me nearly another 15 minutes to get to Seal Rocks (or so I thought). I parked illegally so I was close to the beach track, most people are ok when I do this as the signs all over the car look a bit like an EMERGENCY themselves!

I can’t see Steve or the kayak, both of which are hard to miss. I try to phone, it just goes to message, I try again looks like no coverage. So I turn on the 2 way radio. Yes we have contact.

“I think you’re at the wrong beach.”

We finally meet up and all is well. Nothing ruffles him. I said that he could admonish me in the blog tonight.

P.S. However he did tell me that there is no such word as ker-thud. I replied that I like it and it’s staying in. 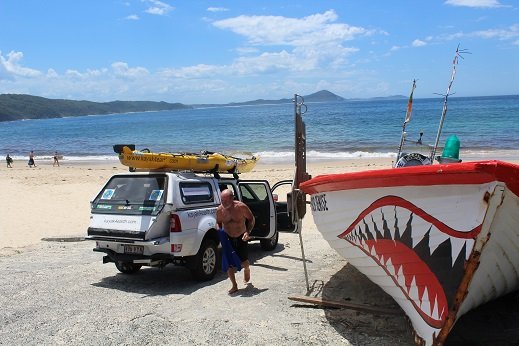