It was always gonna be hot with westerly winds then a southerly coming through after lunch. There is nowhere for a pickup between Seal Rocks and Port Stephens so I decided to put in way up in the Myall Lakes and paddle inland to Tea Gardens, same distance but less worry about the southerly.

Things went well at the start on what is a magnificent waterway with the westerly just starting to puff a bit. There are a few doglegs to go around and as I turned East towards the Bombah Point ferry the wind picked up. Without paddling Old Yella reached 9km/hr so I knew it was getting strong. Lyn got some photos as I shot past and then turned right towards the entrance to the Myall River that runs to Tea Tree.

A hobie trimaran scuttled out from the windward shore as I struggled to hold the line reaching across the wind. Their sail flapped and I wondered how they would get back but that was their problem. I waved but they pretended not to see me. The wind grew to more than 30 knots and I regretted not putting the skirt on as wave after wave slopped into the cockpit. I just held the line but when I got there I found that I was at Mungo Brush and had to paddle straight into the wind for 45 minutes to get to the entrance. Turning left and into the calm waters the trees roared and danced above but it was hot, very hot. Morning tea time, sat in the water on the bank and contemplated how to fill my water bottle that had turned over and emptied in the turmoil.

Just down the river I started calling to fishing houses. A big black dog started barking and ran towards me just as I spotted a human. When I pulled into the sand the dog came over to tell me to bugger off. It was close enough that I could smell his breath but I figured he was just noisy and climbed out anyway. The young bloke filled the water bottle from the tank and I was off.

The Myall River meanders a lot but most of the time I seemed to be against the wind and until it dropped below 30 knots it was bloody annoying. At 2.00pm Lyn and I had a brief chat on the phone while I got blown into the trees. Call over, there was about 300m downwind run before the next bank so I raised the sail and we took off at better than 9km/hr against a significant tidal run so speed over water had to be better than 11km/hr. Tea Gardens arrived at 3.00pm. The temperature was over 40 degrees and that had sapped my energy so it took a while to recover before loading up.

Marny, a good friend who runs the Lismore Car Boot Market met us and took us back to their place where she served a very welcome cold beer. 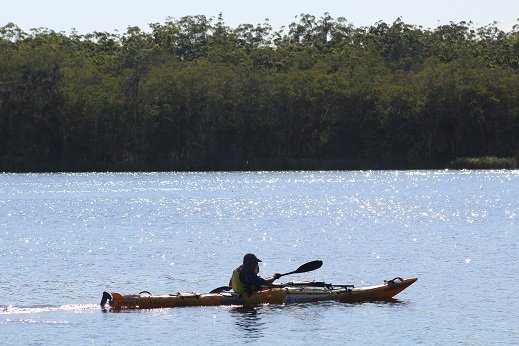 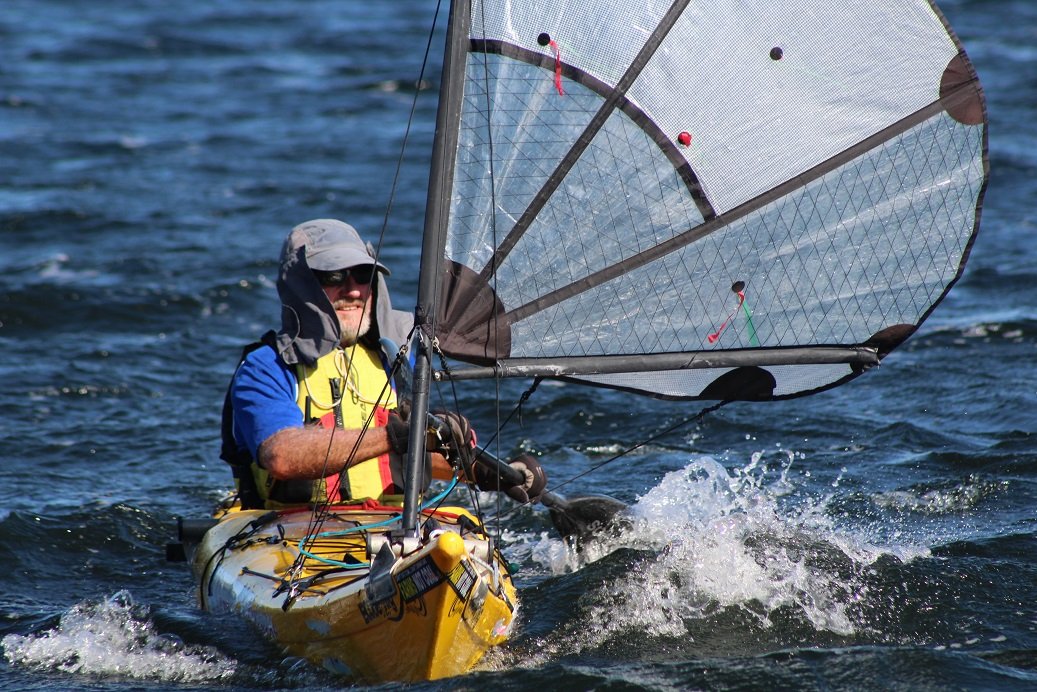 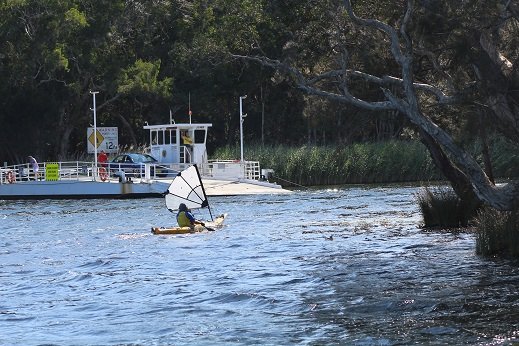 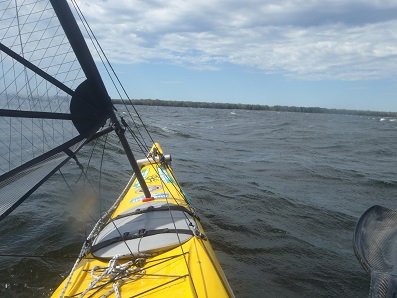 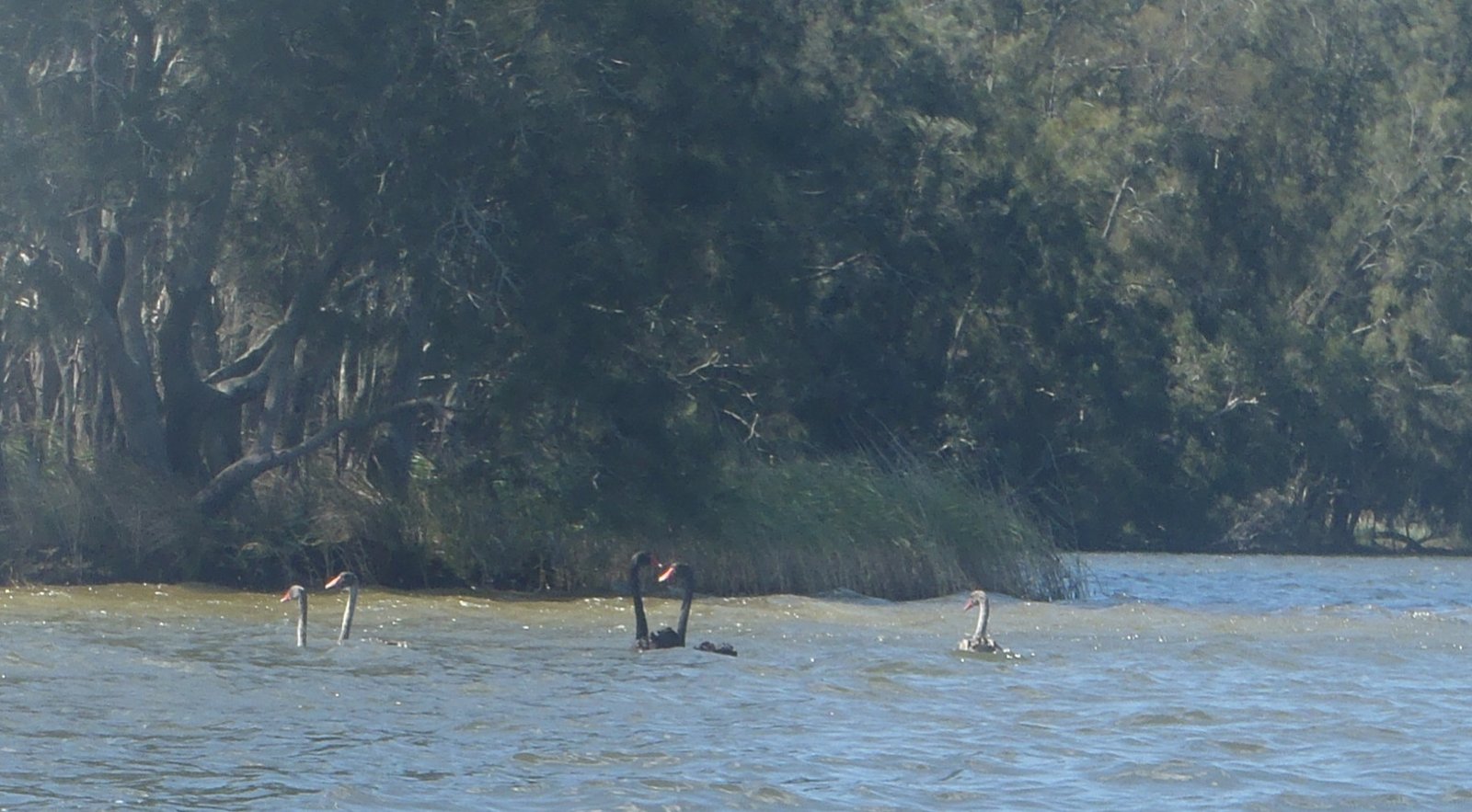 Three kids for this pair 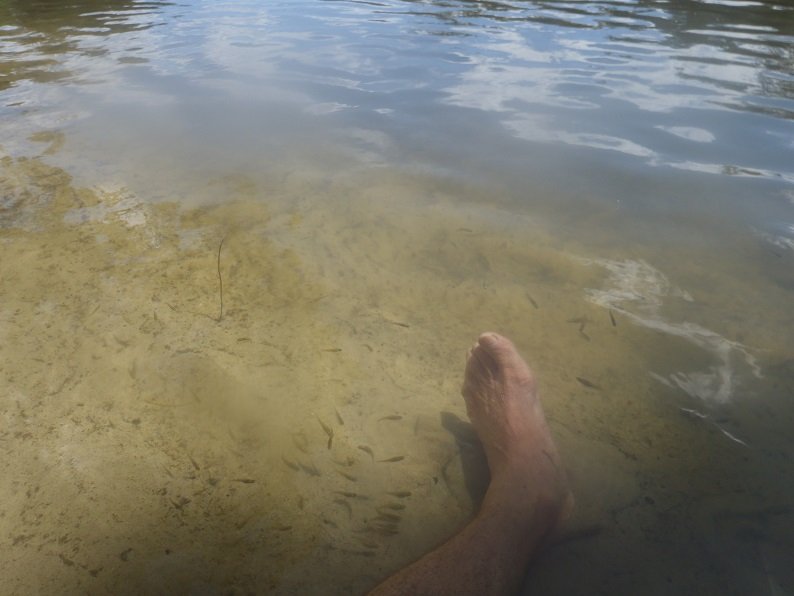 The fish found my feet interesting 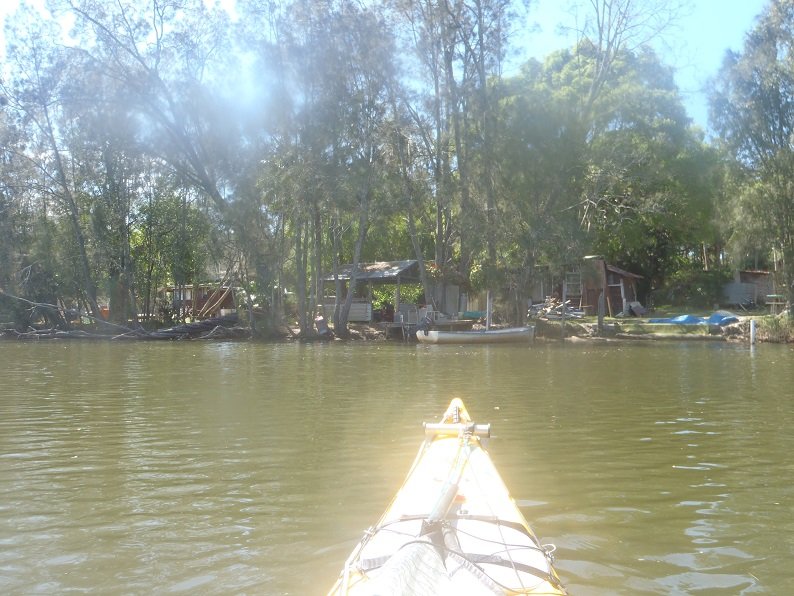 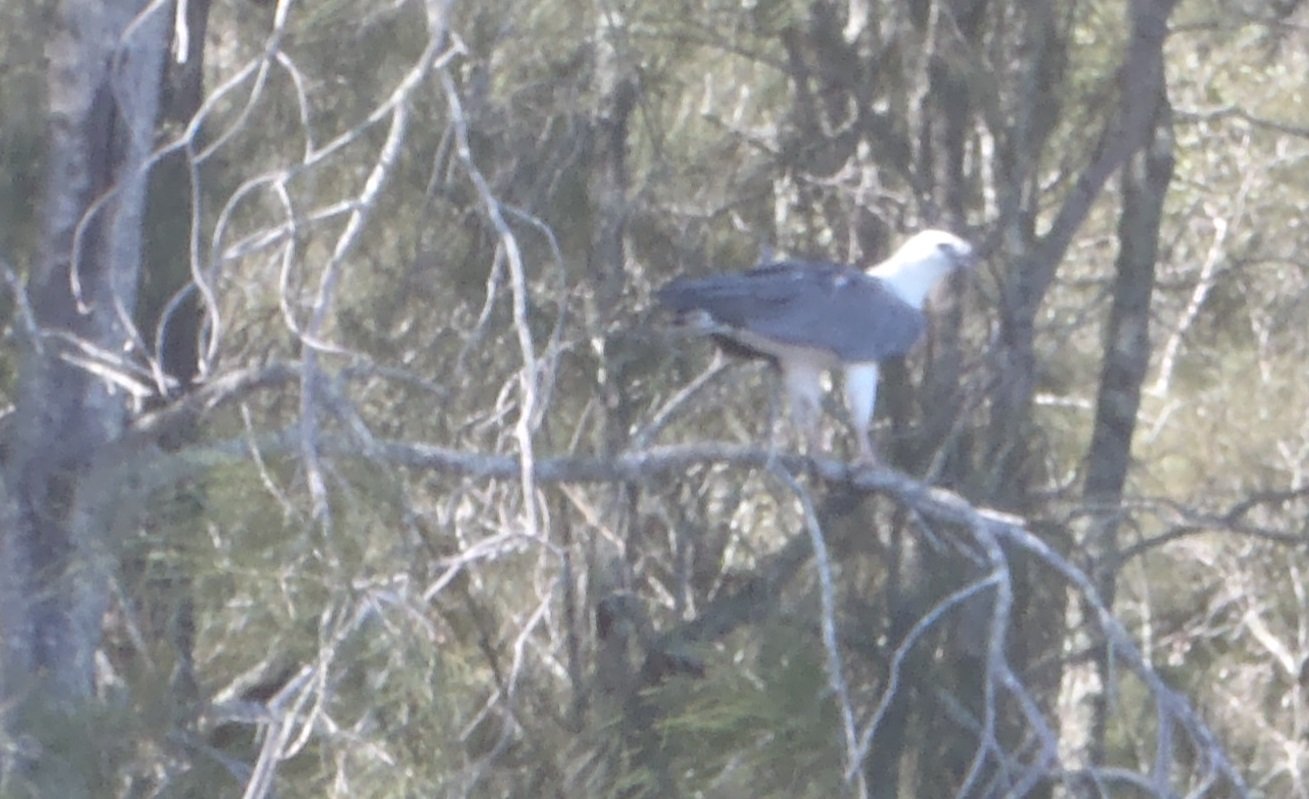 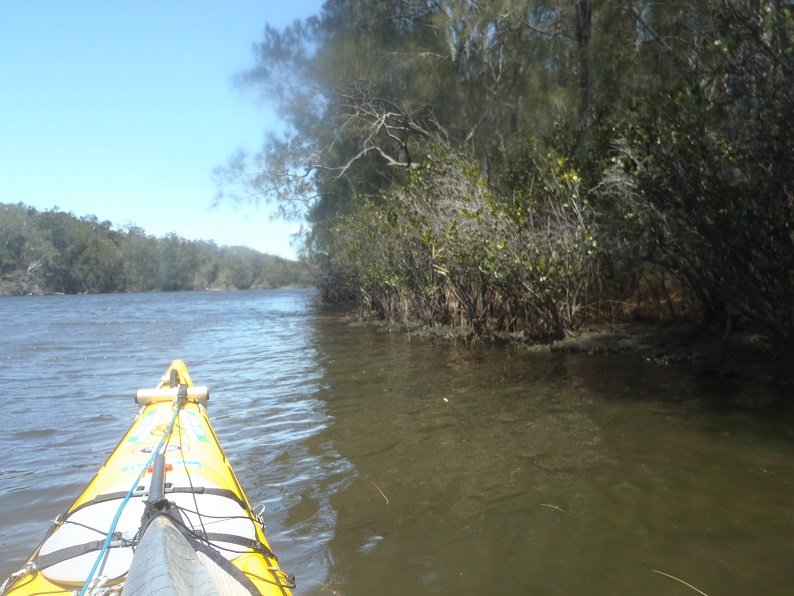 Lyn         Packed up at the Taree motel ready to move on. Steve said, “We seem to have a lot more to pack into the truck this time.” It does seem like this, but we still have the same stuff. When you first leave home everything it neatly packed and everything has a place. As time goes on all the spaces seem to fill up. It’s a bit like a middle age spread it’s what we all started with but it just expands.

Back to paddling. Steve had planned a 60 km paddle down the coast from Seal Rocks to Port Stephens but with the southerly predicted for early afternoon and with no alternative pick up points along the way, he decided on a change in tack, so to speak. Instead he will now paddle through the Myall Lake system until he reaches the Myall River and then continue onto Tea Gardens. I meet up with Steve as he paddles towards the Bombah Ferry. He has the sail up and is powering along at this stage.

As I follow the road I am in the midst of National parks and I find it tricky sometimes to read the wind direction accurately, I can feel the wind shift but is it true north or north west this makes a difference to Steve’s times as he can use the sail with the northerlies and this means he will get to his destination by anything up to an hour sooner. As it so happened a couple of days ago when I was placing my binoculars in their case I found an old compass, they are both about 30 years old,  and both have come in handy. I remembered buying the compass so my sons could learn some bush skills. We lived on a farm and they loved to go adventuring.

This is what our journey and the Climate Emergency Declaration is all about we want to enable our grandchildren to be able to enjoy this amazing country and have their own adventures. However if the government doesn’t address the problems of climate change future generations will be battling the elements rather than enjoying them. Please sign the Climate Emergency Declaration petition and encourage everyone you know to do the same.

I arrived at Tea Gardens at 10.15, I am early today after the fiasco yesterday. It is HOT! I drive around to check out the ramps there are numerous ones here, it just depends on where Steve chooses to come in. Then I tried to find a cool place to wait. All I could find were outside cafes, too hot to sit there. Then I spied an ice cream/coffee shop, I stepped inside and it was just right, however everyone else had the same idea and there were no empty tables inside only outside; then this friendly voice said. “Would you like to join us.”

This turned out to be an eventful meeting. We discovered that we were both visitors to Tea Gardens and chatted about our reasons for being there. I explained about our kayak4earth trip and the petition. Then Sonia who was accompanied by her young daughter began to tell me about herself. She had a farm near Dungog where she ran cattle. I mentioned during the conversation that I worked for Richmond Landcare then the conversation got even more interesting. She briefly described an environmental waste project that was going to be set up on her property, I had heard of similar projects but the one she described would take the experiment to a different level. We exchanged details and I said that I would like to hear more about the project when it was underway; Sonia said that she would check out kayak4earth and as her daughter who had been very patient was anxious to have some fun we all moved on.

Steve and I have met lots of interesting people along our journey; many of whom are working to raise awareness as we are about climate change. We hear from them about the other work they are also doing to improve their own local  environment. If only the Australian Government would listen.

3pm     Steve has had a long hot trip. When he lands at Tea Gardens he takes time to re-energise. He just lays in the water to cool off before we go about the routine of packing up Old Yella.

A friend of Steve’s, Marny Bonner who some of you may remember from the Northern Rivers has been living at Tea Gardens with her husband Gordon Fraser for a couple of years. She has come to meet us as Steve arrives. Marny has generously offered us a place to stay and Steve is Looking forward to the catch up.

As we sit on Marny’s deck enjoying a cool one, the southerly arrives, while it is a welcome relief from the heat it does not play out well for tomorrow’s paddle; luckily it’s a shorter paddle tomorrow  to Anna Bay.