Easy set off from Boat Harbour at 7.30am after two great nights with Marny. The wind was up early and from the east, supposedly shifting from the north and building to gale force. Yee haa bring it on! Passing round the rocks I took a photo thinking that it might be my last chance because the wind was only twenty knots. It died a little and I got another shot down the sand dunes that run for a very long way…. boring.

We had bought a large bacon, mayo and cheese scroll and I had a piece of that for morning tea at 9.00am. By 10.00am I was really feeling tired. Everything hurt, the wind had stopped blowing and I still couldn’t see Newcastle. I thought I knew what the trouble was so had a banana and a sugary drink. Within ten minutes I was powering on again. So much for white bread and some tasty crap. Next meal would also be a banana.

A couple of planes came and went from Williamtown airport. There was a roar from behind my left shoulder. When I looked for the plane I found it already ahead of me and streaking towards its base. Must be bloody fun to fly one of those airforce jets.

With a strong northerly wind forecast and hardly any wind at all I looked at the clouds over Newcastle with a bit of trepidation. Maybe the southerly was coming. The BOM has been wrong before, even on this trip, so I hurried to Newcastle as fast as I could, arriving about 1.30pm after 38.5km

That’s halfway for the paddle leg and the end of paddling with Lyn. She goes back to work for three weeks and Warren does the support down to Moruya. What a great three weeks it has been with her. I have loved it.

Reception at Horseshoe Bay 10.00am tomorrow.

There are a number of ways to get started. You can go out through the waves first and then put the skirt on but that is after you sponge out the water that gets in. You can sit right near the water and have the waves drag you out with the skirt half on and fill up with water or you can put the skirt on above where the waves come and knuckle push into the water. I like the latter.

Bit of swell still about

Boring… these sandhills go on forever 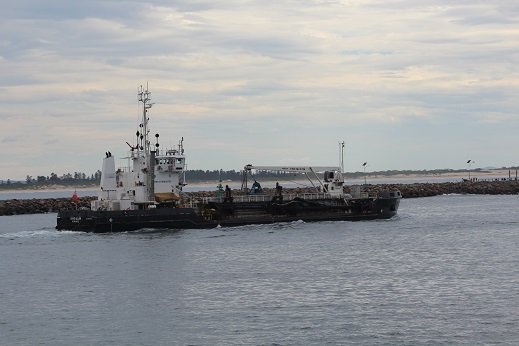 This guy dredges toxic sand for a new coal port facility and dumps it off shore. He is on his way out here 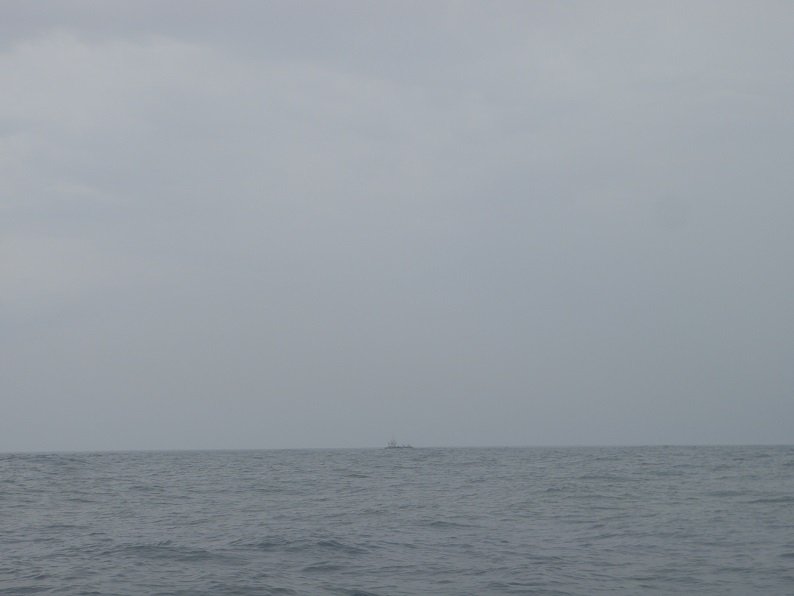 Look really closely. That’s him getting rid of his muck  at maybe 2km offshore, maybe less. 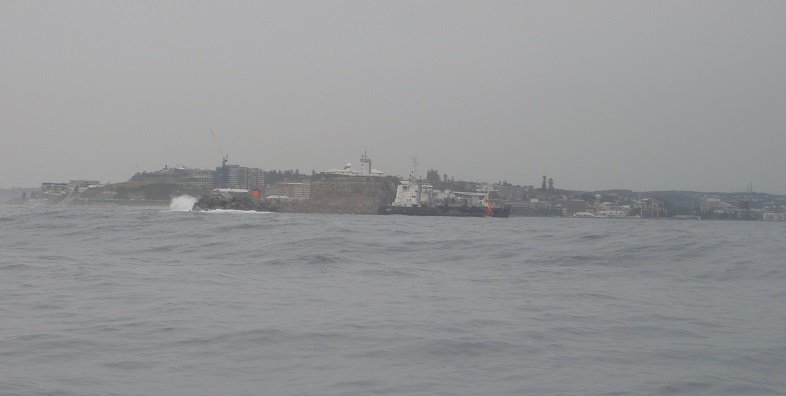 Coming back to get some more

No wonder the walk out to Nobbys is popular. Who could resist such an enticing sign 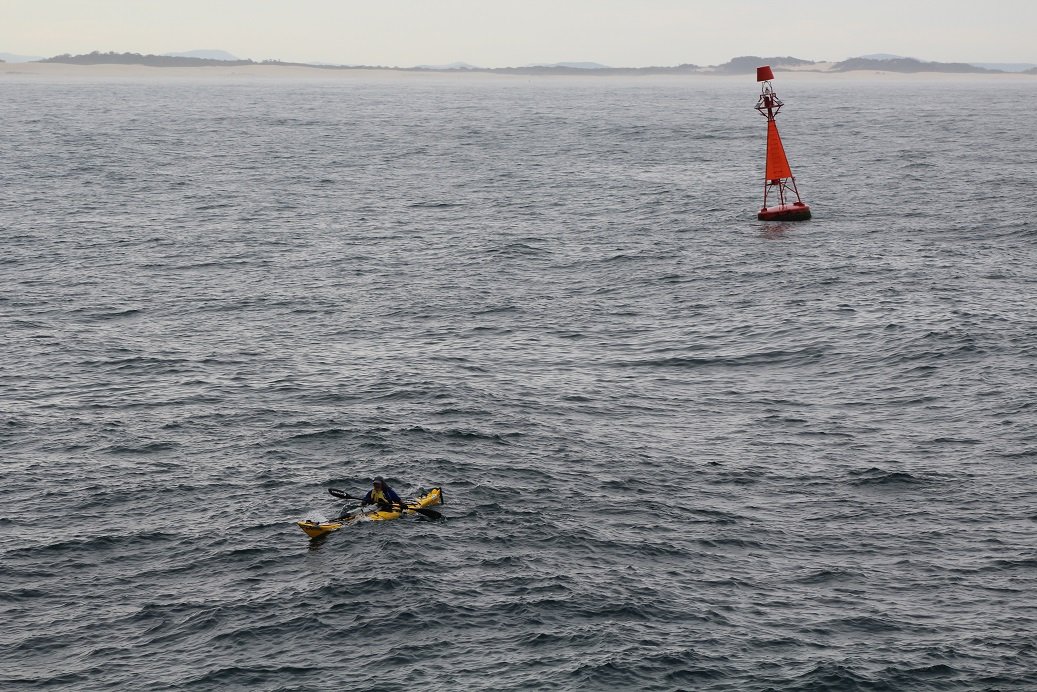 Lyn likes this one 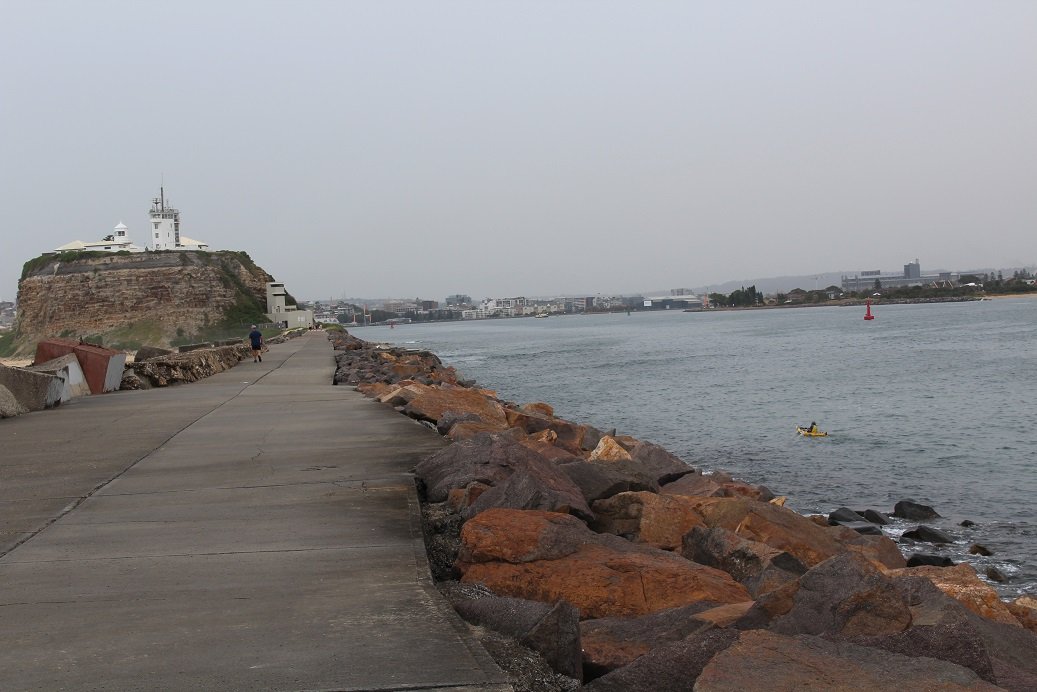 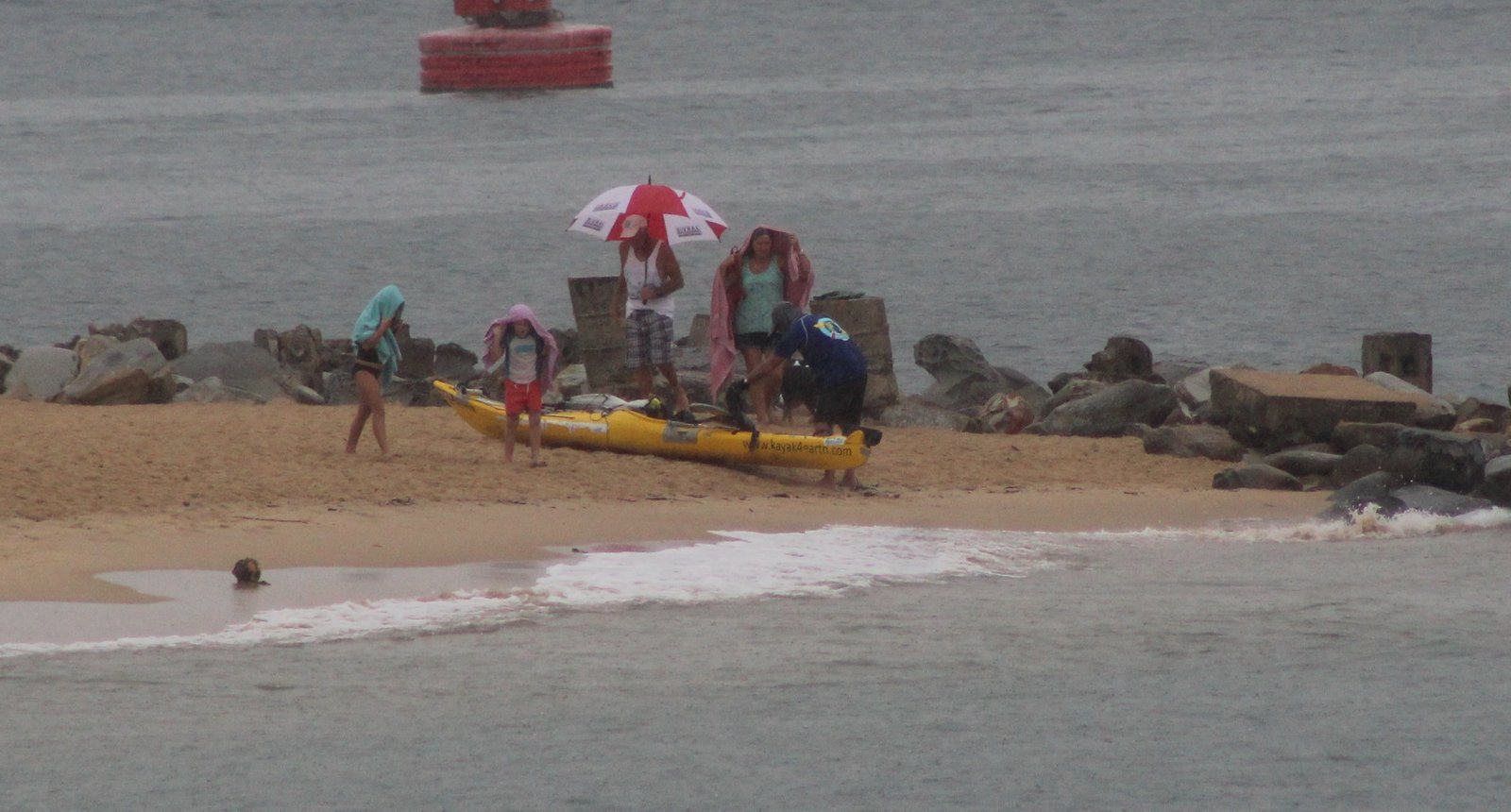 The rain arrives just after me

Lyn       DAY 20     We said our farewells to Marny and planned to get together when Gordon and her were resettled back in Alstonville.

Steve left Boat Harbour with the Seagulls waving him off at 7.30. No stops in between today, our radio call is scheduled for 1pm at the break wall in front of Nobby’s Head Light. Steve’s guestimation for landing at Horseshoe Beach is 1.30.

It took me an hour and 15 minutes to get to Nobby’s Beach. Interestingly they have a large ocean pool tucked in the southern corner. I have seen a few along the way; as well as the netted pool at  the entrance to the Lakes at Forster. The Forster pool was by far the busiest. With all the interest back home at Ballina re an ocean pool it was good to see which was the most popular.

I sat and watched the surfers at Nobby’s Beach for a while, then I set out to find Horseshoe Beach. It was just on the other side of Nobby’s Head Light. It offered an easy entry into the Hunter River and Newcastle.

As I was there early I had plenty of time to explore the area. There were numerous historical buildings and old cottages mixed amongst the high rise apartments and hotels looking over the ocean. After being caught out a few times during the trip with Steve arriving early I didn’t want to get caught short on time today, my last official day as support crew, on water. So I returned to Nobby’s Beach got a salad sanger and a cup of tea and chilled out for a while.

I set out along the path next to Nobby’s Light at 12 noon, thinking that I had plenty of time. At 12.15 my phone rang, the voice said “Gedday.”

“About 2 km out from the Lighthouse. I’ve been paddling like buggery to get here before the storm hits.”

Like I said, be there early (note to Warren).

We had both been watching the storm brewing, but fortunately it was not too bad just a bit of rain dumping on us. It took Steve about 30 minutes to reach the breakwall and by the time he got there it was raining.

We packed up “Old Yella” and headed for our hotel, very wet and bedraggled.

We drove to the address we had been given for the Hotel Aspire. This was a little out of the way  but Steve had spent a stressful previous night dealing with the third party hotel booking company  (Advice always  book directly ) so in the end he just booked this one.

“No we have just arrived.” So off they went in search of reception.

We pushed doors looked through windows…but no reception anywhere.

Mind you it is still raining and we are progressively getting wetter. We looked up the hotel in white pages and online but all that came up was the booking service.

I decided to go back and have another look. I looked through the doors and read a message which said,  if you are now in you have used your code correctly. What the …

Then I remembered my brother in law, Peter telling me some years ago about the new style of hotels where you just book online and turn up and let yourself in. I can UNDERSTAND why they never took off! However there was a number under the message so I rang it…no answer just music, this went on for ages so I hung up and rang again…more music, THEN a voice. It turned out that they were supposed to have sent us and the other people a text message with the code for the front door and another code for our room. Guess what no one received a code! She said I will send it to you. “Please just give it to us now.” She did, and then I gave my phone to the others and they could get their code and HEY we were all inside. She did resend us all our codes BUT I didn’t close the door until we received them.

The journey has been at times, full of anxiety, both for Steve and for being there for him, full of laughter and most of all full of love.

For now it’s back to work for me for a few weeks. However I will see you in a few weeks at Moruya  for the slog up the hill to Canberra.