Very successful day even if the start was less than ideal. 6.00am and ready to hop into the car at Lyn’s place 25 minutes south of Ballina when I realized that I had not put Warren’s stretcher and mattress in. Tempted as I was, I did not say a rude word but just went straight home chucked them on the back seat and was back where I was 50 minutes later.

Uneventful drive down and Warren’s train arrived at Broadmeadow (Newcastle) right on time at 2.05pm but I was in the carpark, which was the wrong side of the track. Warren’s phone wasn’t working but two extremely clever engineers sorted it all out and I left Horseshoe Beach at 3.10pm, albeit wearing my spare hat because unbeknown to me mine had hidden itself under the seat.

There was a good nor’easter blowing and against that and the tide it wasn’t until after 3.30pm that I cleared the breakwall. That wasn’t the end though because when I wanted to turn right there were waves braking on rocks so to be sure, to be sure, I battled out to sea for another ten minutes. Sail up I was away, slewing down waves and reaching a top speed of 19.3km/hr. Yee haaaa!

Radio sked was at 5.00pm. Warren had just arrived at Red Head and could see me straight in front of him. We decided to check in again at 6.00pm and then 6.30pm but the latter was not needed because I was already there. Three hours to cover the 26.5km to Swansea Heads.

Warren seems to have it covered except for a couple of minor details like changing camera lenses.

Note to two beautiful girls: Tawny, the feather must be working because it is still there. Chloe, yep, never give up. Ever. 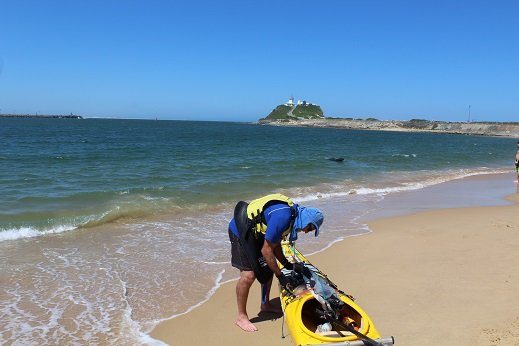 Getting ready to dash down the coast from Newcastle

Warren     DAY 1    Well, after  my train trip from Sydney to meet Steve in Newcastle, I arrived in a very relaxed state, to be brought back to reality with the realisation that my work was about to begin. This is a role I volunteered to help Steve with some time ago and which I have been looking forward to.  After a short drive to Horseshoe Beach, it was time to begin my support crew experience. After watching Steve prepare himself and his kayak, I strode down to the waters edge in my official photographer role. After a few quick photos Steve disappeared out around the headland and I drove south, hoping to catch him on route to Swansea. I arrived at Redhead and took some photos as he passed, but sadly I hadforgotten there was a zoom lens. Pity, because I’m sure they would have been award winners. Anyway, Steve arrived in Swansea in good time and I thought I had the role figured out, apart from the camera. Exhilarated by the day, sleep was easy

Maximum Temperatures At Williamtown RAAF, next to Newcastle Airport, 1951-2016  These have risen nearly 2 degrees but note this is mostly over the last 20 years and so faster than global averages.

Minimum Temperatures At Williamtown RAAF, next to Newcastle Airport, 1951-2016. This has risen over 2 degrees but steadily over the whole period.

Diurnal Range.  This fell for the 40 years as minimums rose but not maximums, and then it has risen ever since. This is a fairly standard result that minimums started rising earlier but now maximums are rising much faster.

Rainfall At Newcastle Nobbys Signal Station   A very long span of data back to the 1860’s. Rainfall has generally fallen over this whole period from around 1300 to 1000mm, about 23%. 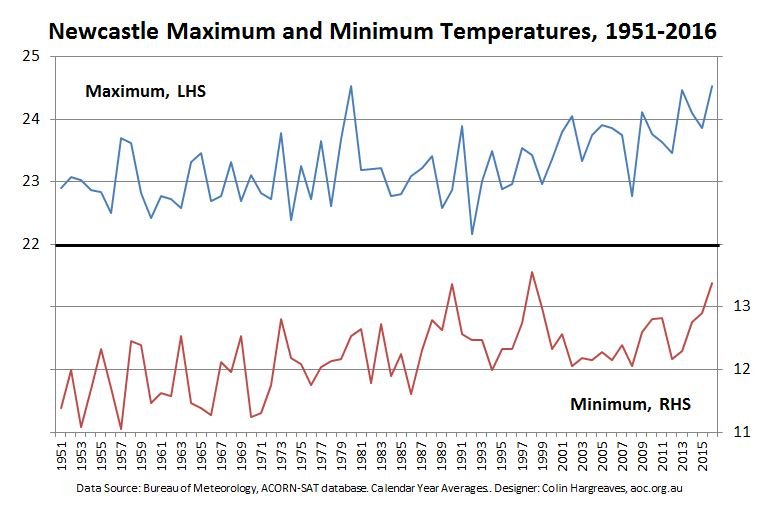 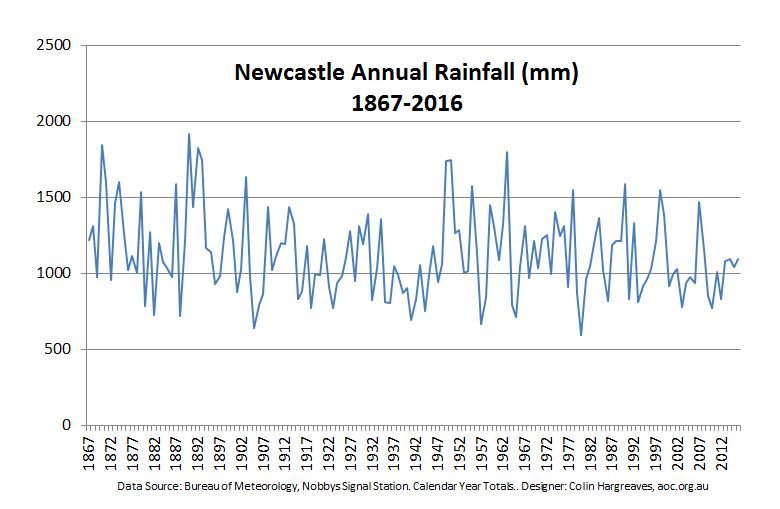