The plan was to be at Fort Denison by 9.40am ready for a paddle across to the opera house at 10.00am. Made it with just 5 mins to spare but Warren held me in position for another 15 minutes while some stragglers arrived.

When the call came I hoisted sail and paddled across. The wharf was crowded with people holding placards and banners. It was a noisy welcome and uplifting to see all of those people. David Bell took a photo as I threw the rope to Warren. Perfect timing. I climbed up the ladder, dragged the kayak onto the wharf and we all trouped off to the park, about a hundred metres away.

Perhaps you will recall that Kerry from my school days met me at the beach at Newcastle. Well the same thing happened in Sydney, Neil Schafer popped out of the crowd. He and I used to compete with Kerry for top spots all through school. We had seen each other in 2010 at the fortieth Grafton High School reunion but the three of us go way back to when we started school which is quite a long time ago seeing as we are all 64 now.

The meeting in the park was superbly organized with a number of speakers. Warren has them covered below but starting with Uncle Allen I have to say that the quality of the talks was inspiring. We do need to feed off each other. We do need to support each other. This is a battle about psychology, facts do not seem to work for the majority of Australians and they certainly don’t work with most city media and major party politicians.

A very pleasant surprise was that there were two young and very active engineers there. I still hold out hope that Engineers Australia can be a major voice for climate action.

The only complaint that I have is with the weather gods. Having just paddled four days straight against the wind, it was favourable today and impossible tomorrow. Bugger.

BTW, there were a few Knitting Nannas there. Two years ago one of them gave me a small knitted triangle that I kept with me all round the world for luck. Unfortunately a mate in Ballina has cancer and I gave it to him. Rosie, a nanna from Byron gave me a knitted rosette to replace it. 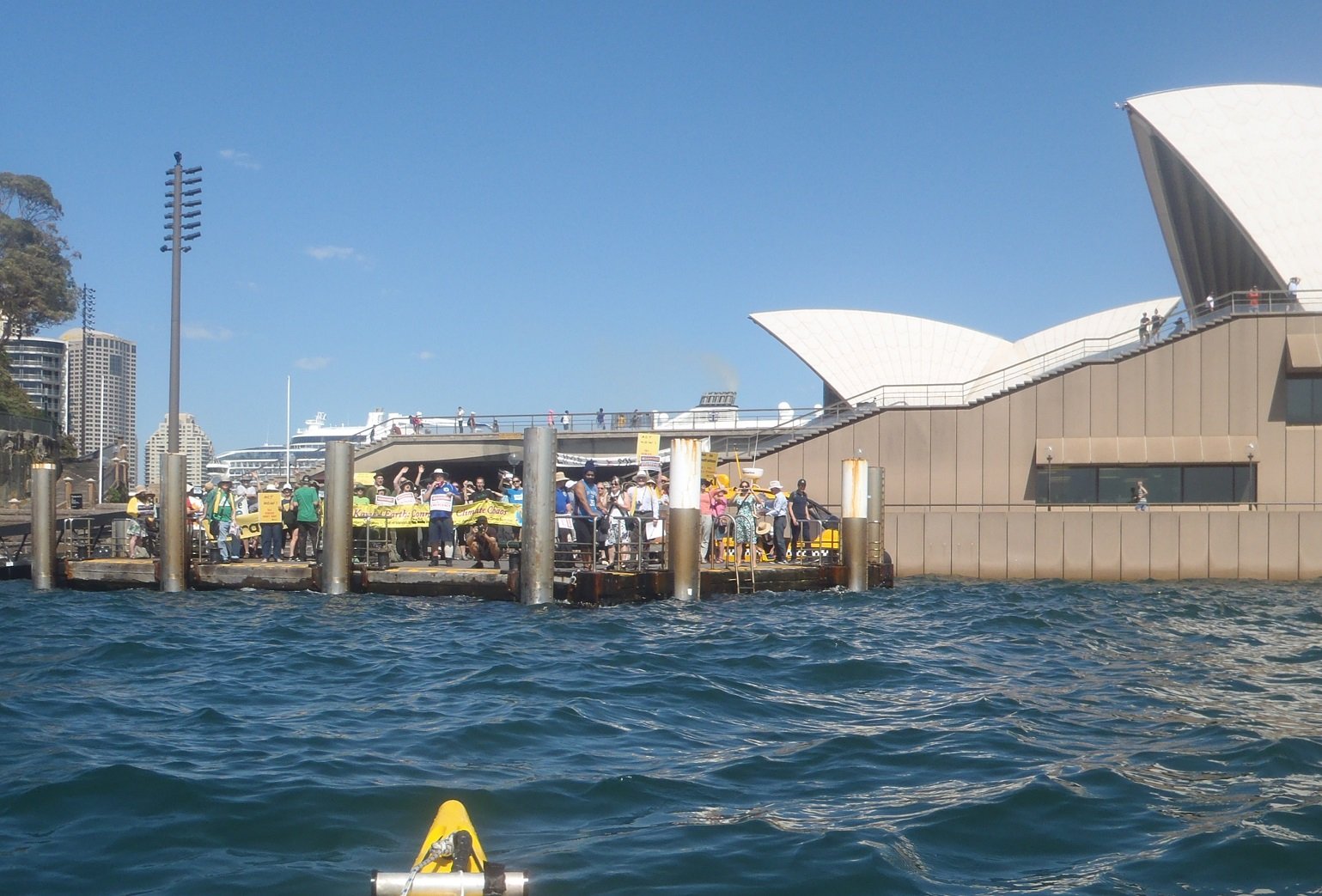 Wow, look at all those people 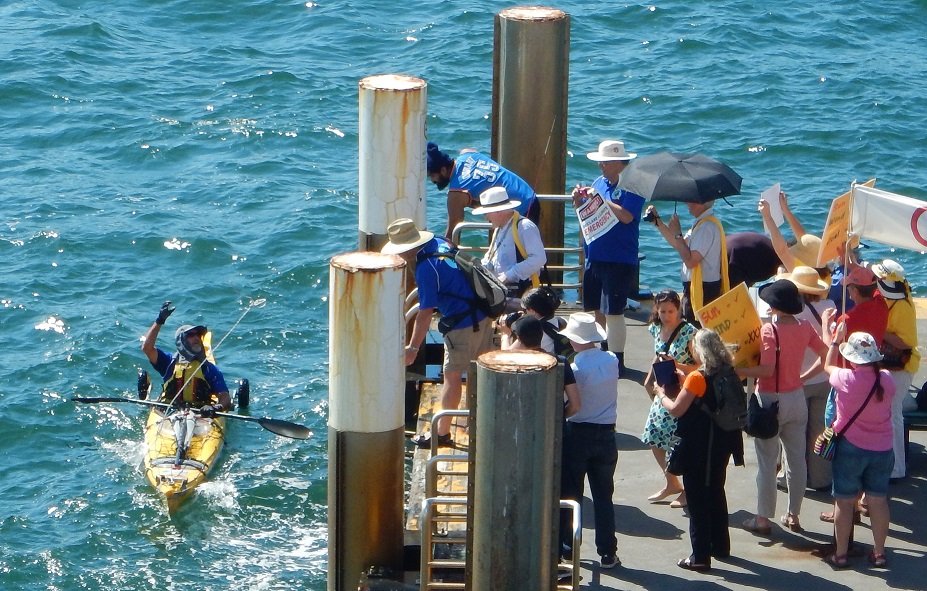 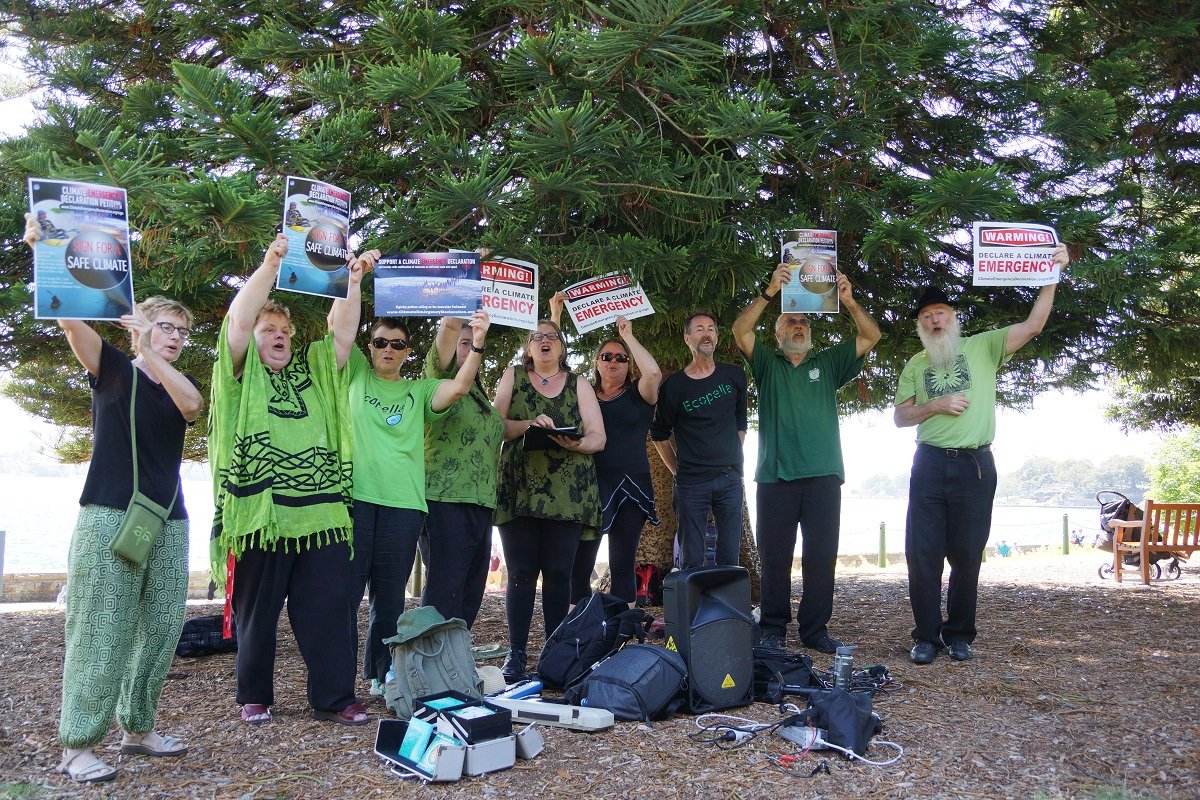 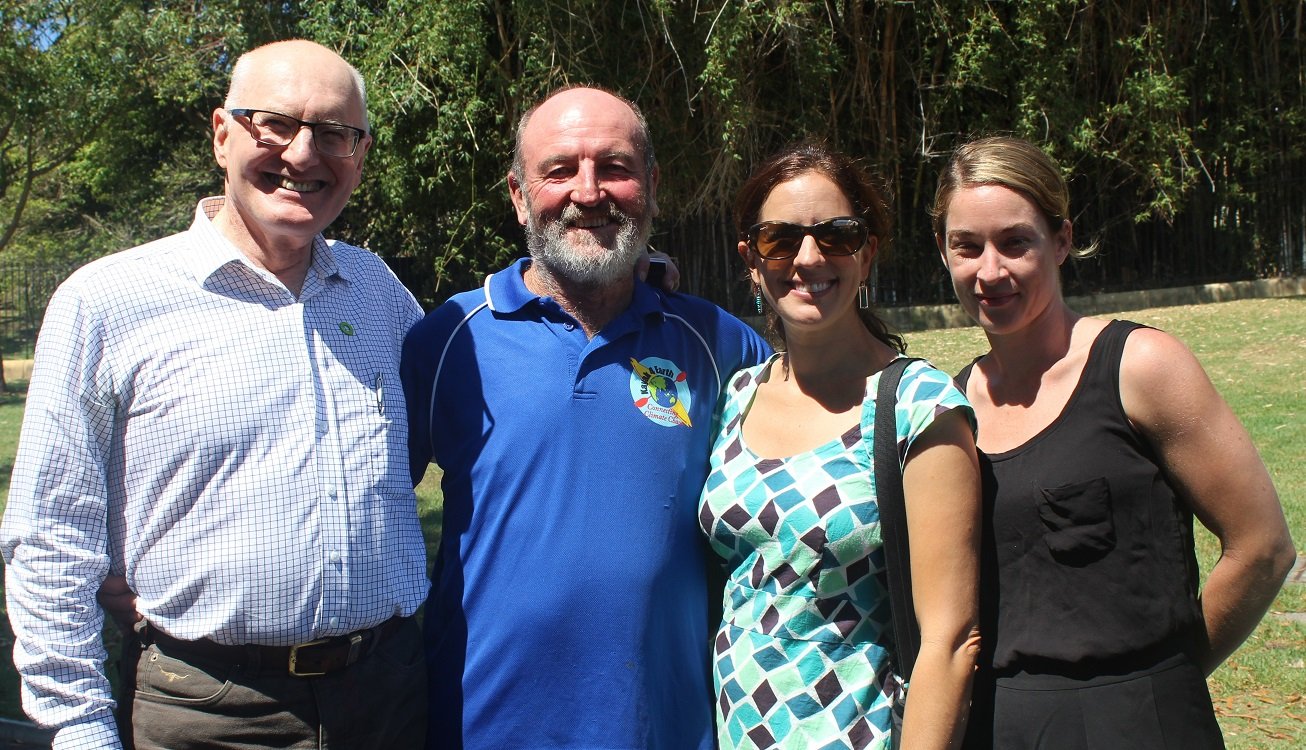 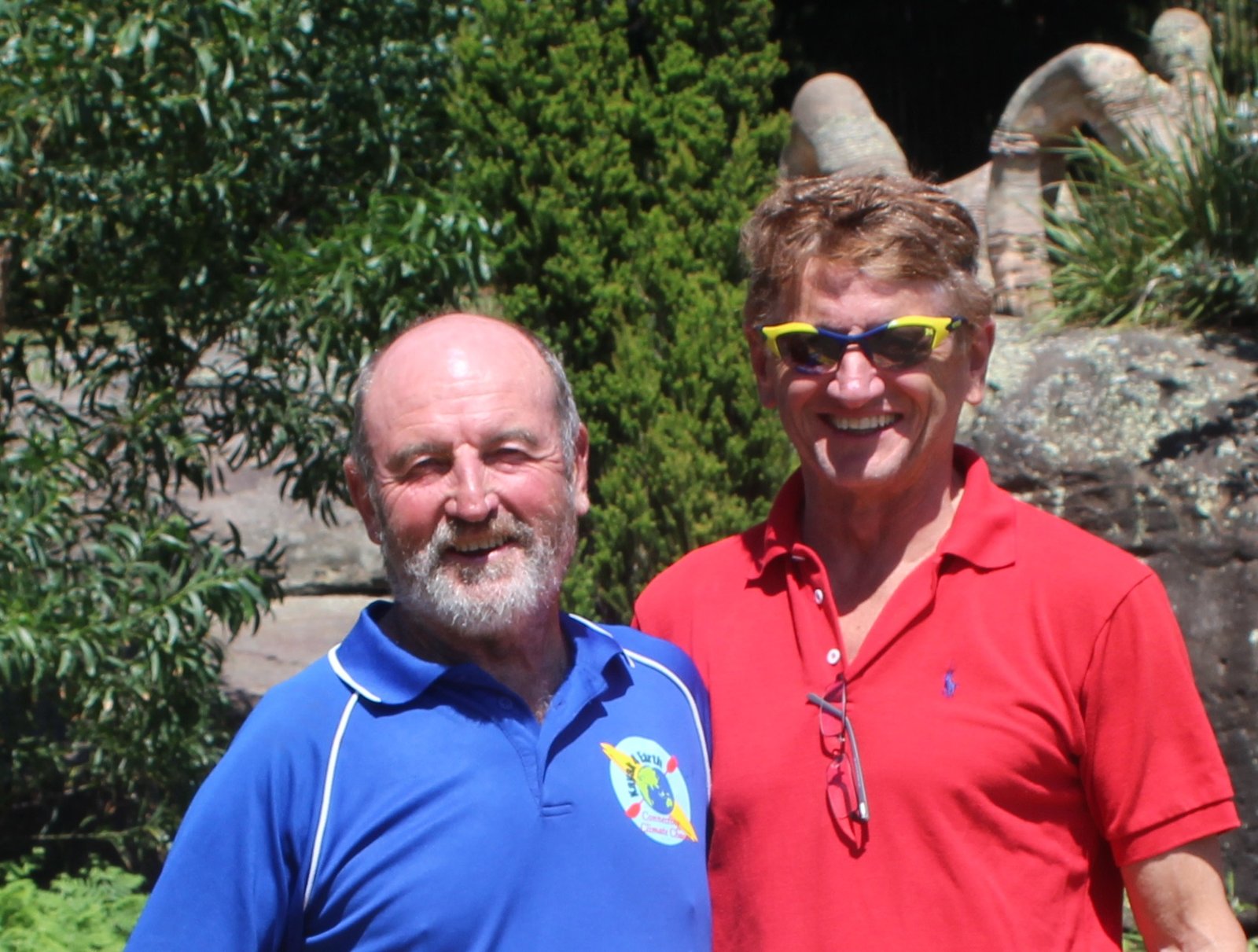 That’s Neil. How about that eh Kerry. 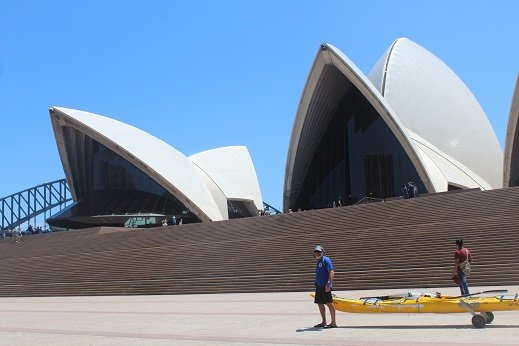 Very similar to the photo taken 31st January two years ago. A lot of water under the kayak since then!!

Warren     Today was a day of celebration, as Robert Garnsey and his team had arranged a fantastic welcome for Steve, including a picnic in the Botanical Gardens, a Welcome to Country, a number of invited speakers, and entertainment.

I will list the people involved later, and as there were many, I apologise in advance for any errors or omissions, and I will happily correct  any if I am advised

A crowd assembled on the Eastern side of the Opera House forecourt to welcome Steve who was scheduled to arrive at 10 am. There were quite a number of groups represented, and many signatures were added to the petition before Steve paddled in.

We all moved onto the pontoon at the Man O’ War jetty as Steve approached. Two groups of kayakers totalling approximately 50, approached Steve, from his left and his right, converging around him about 100 metres from the pontoon, to welcome him. The crowd on the pontoon numbered well over 80, and Steve was given a tumultuous welcome as he arrived.

Following a quick welcome, all adjourned to the shade of two beautiful trees in the Botanical Gardens for the official welcome, speeches and the picnic. It was great to see Janet Ellis join us, following her coordination of the welcome for Steve at Shelly Beach on Australia Day

Uncle Allen Madden, from the Metropolitan Local Aboriginal Land Council conducted a Welcome to Country, and under the guidance of James Dagher our MC, we listened to Kate Smolski, CEO of The Nature Conservation Council, Councillor Jess Miller from The City of Sydney, and David Hood, from  Engineers Australia, BZE and other duties too numerous to list.  Petitions were handed in by Alex Pye, Wilderness Society, who handed in 300 signatures, Angela Michaelis, Climate Change Balmain-Rozelle, who handed in 500, and Annie Nielsen, Parramatta Climate Action Network, who handed in 300.

A series of wonderful photos was taken for us all by Jemima, and video by Gabriel

Lastly, I want to acknowledge and heartily thank Rob Garnsey, Phil Bradley and Dominic Case from Climate Change Balmain-Rozelle for organising and coordinating the event. It was a massive task, and the result was an inspiring event. Thank you and congratulations