Early start for the boys today. Warren’s new buddy was back home working so it was all work for him in temperatures near 40 degrees.

I set off from La Perouse just after 6.00am with a light northerly ruffling the water. A sea fog drifted towards the land and just as I was about to cross the entrance to Botany Bay an oil tanker loomed out of the fog. There were two tugs in attendance and it appeared to be going really slowly but it covered ground quite quickly, so I was pleased that I saw it before committing to the crossing.

By 7.00am the wind was strong enough to fill the sail, about 4-6knots. I didn’t go into the bay in front of Cronulla and aimed for the furthermost cliff that I could see in the national park. As the fog rolled in these cliffs disappeared but the sun was still there so I used it for direction. When I could see the cliffs again I was on course so dead reckoning worked fine.

The wind increased and it looked like a nor’easter was forming but it was fickle. Sometimes it was very strong with crashing waves, sometimes a westerly and sometimes nothing. Warren was on the hill at Stanwell Park ready for a sked at 11.00am. He was hot! We agreed to meet at Coalcliff where I pulled in at 12:15 for half an hour and a cold ginger beer. The shore dump was a bit strong so Warren held the bow straight and dragged it towards the waves until Old Yella floated and I crashed through a couple of smaller waves before resuming the paddle south.

To get into Coalcliff I had battled a head wind and as I paddled out there was a head wind. Ahhh such is life. The nor’easter was doing battle with the land winds, sometimes winning, sometimes not. Out to sea it was strong so I tried to stay out there where it was a mad scramble down the waves trying to keep as straight as I could but sometimes I would drift in or maybe the land breeze would win and the sail would go limp.

There were more bluebottles than any other day and when I didn’t concentrate the right blade would pick one up. The first I would feel would be a tug on my arm from something like a piece of string. Then I would have to unravel the blue line very carefully. This happened half a dozen times with two getting tangled up and stinging me as I came into Wollongong Harbour at 3.30pm.

I logged off with Marine Rescue with 61.6km completed. 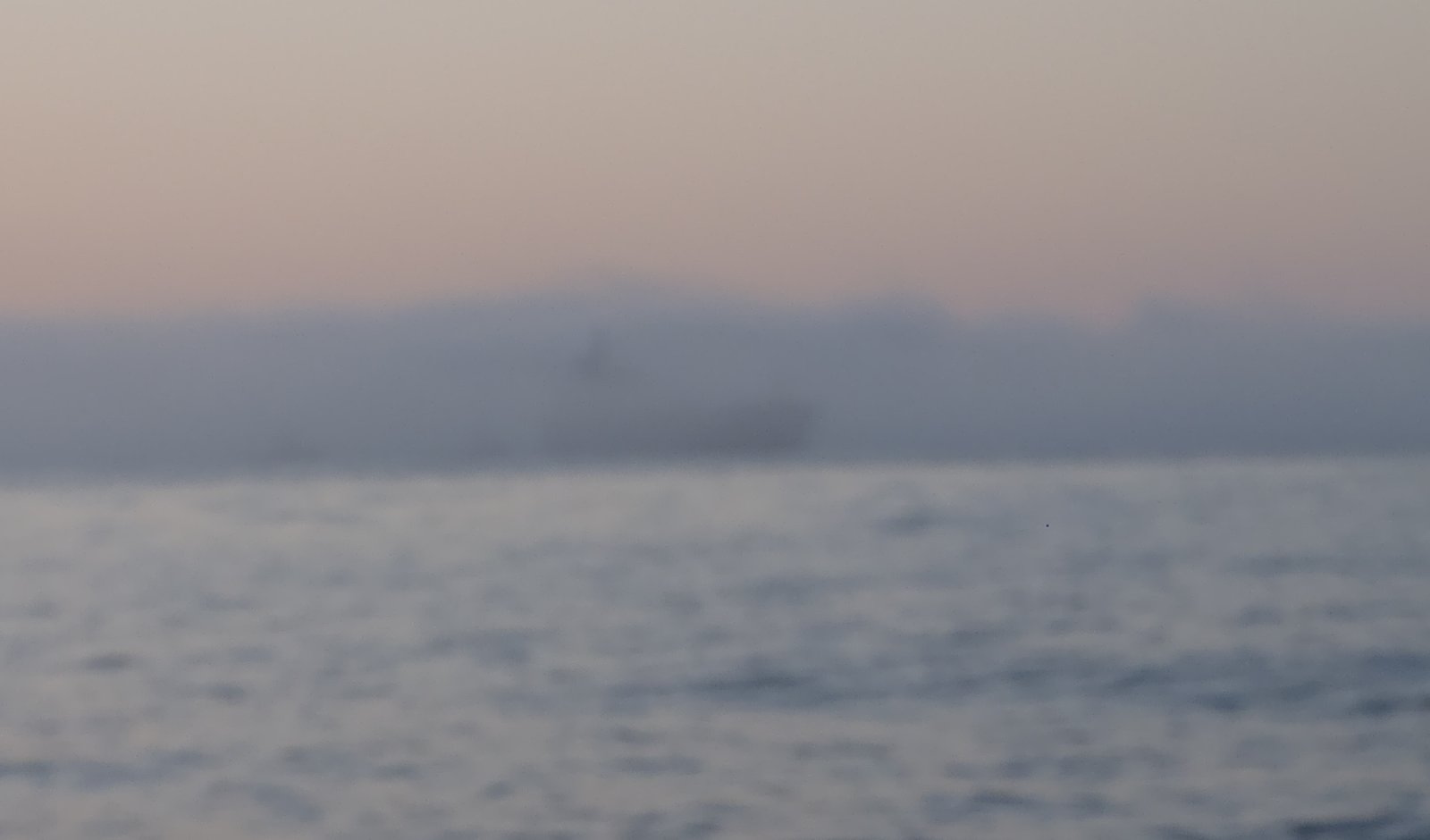 What’s that coming out of the fog. Look carefully and you can see the ship and two tugs 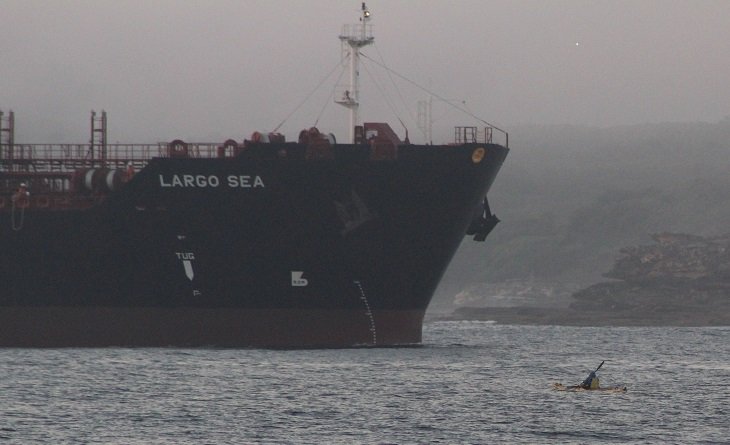 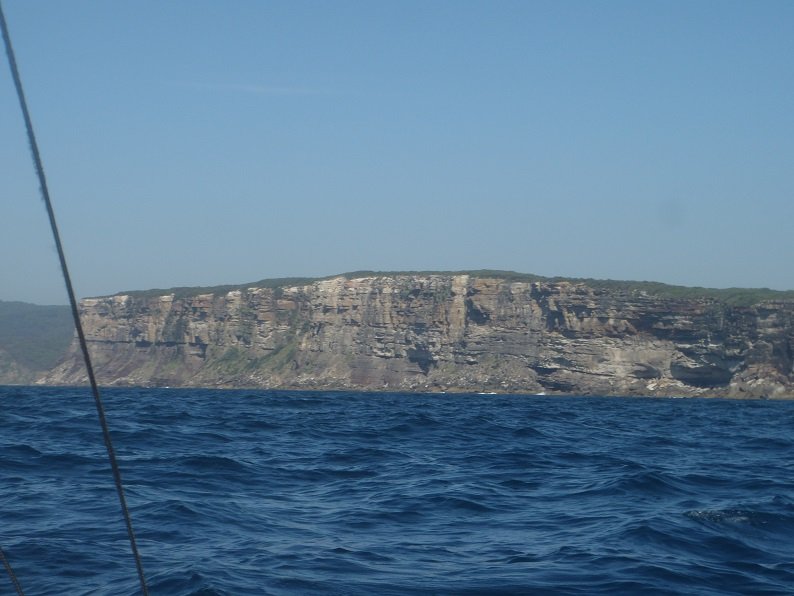 Cliffs in the national park. What a difference to the way up two years ago when the wind was onshore and the waves crashed over me at chest height. Seemed there were a lot more cliffs that day 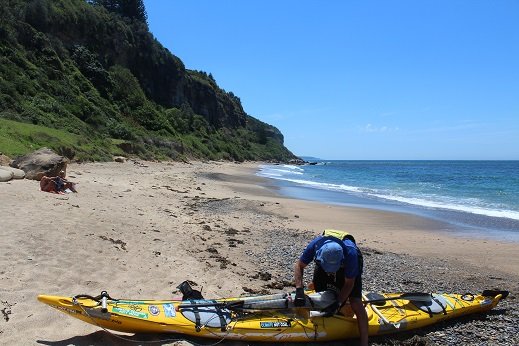 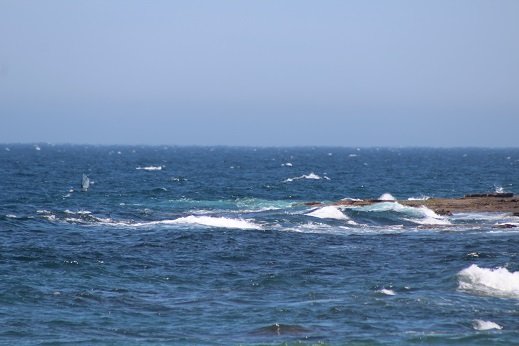 See how hard it is for the support crew. You can just see me and that is only 400m

Although speeds are high in these condition it is hard work. As the wave picks up the kayak I will push down as hard as I can with my right toe but the kayak will still slew left. It then takes about ten sweeping left side strokes at full strength to bring it around and sometimes even that doesn’t work and it slews off to the left until the sail flaps 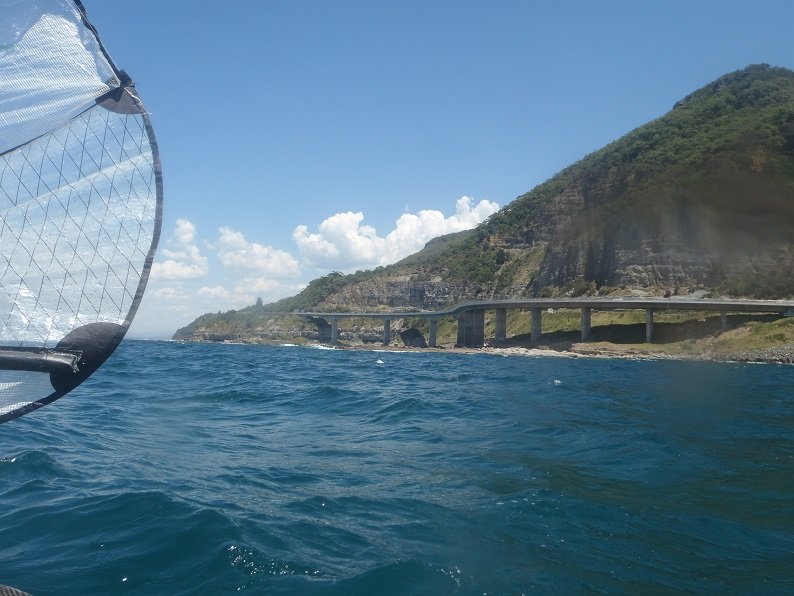 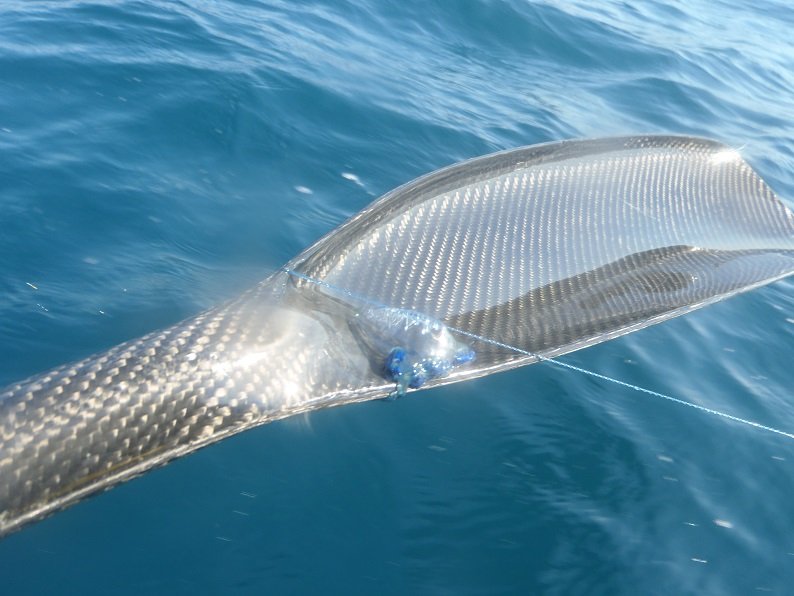 The blue thread is quite strong (as well as painful) 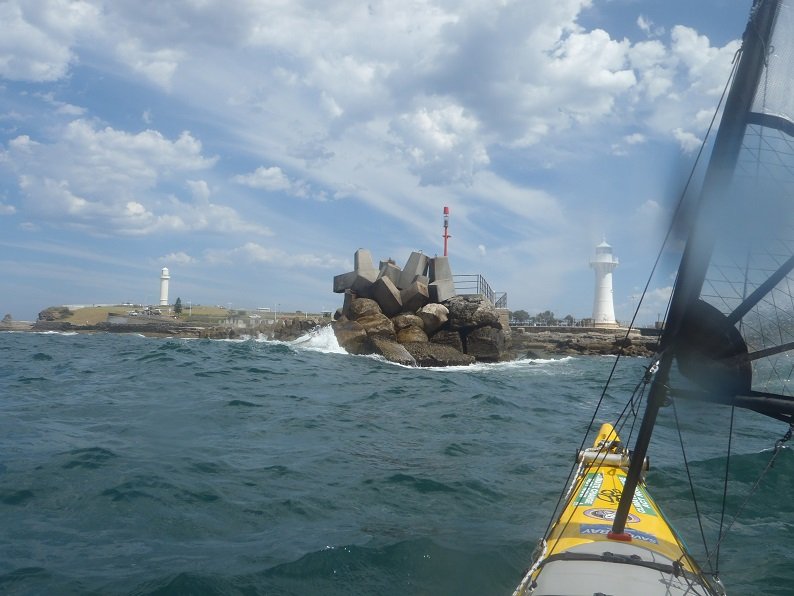 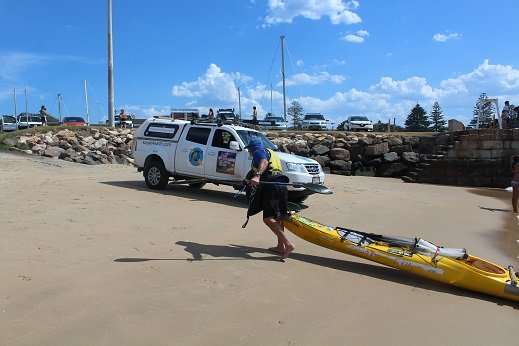 Warren     Well, up at 4 am, as you do, driving at 4:45, waving goodbye to Steve at 6:05 at La Perouse, and I was ready to start my day. We’ll try to make contact at 11:00am, and half hourly from then, and won’t pass Coalcliff until we make contact, that was the plan. And it worked perfectly, two experts fully in control of the situation at all time. Visual contact was very difficult because of the myriad of white caps looking for all the world like Steve’s sail, as well as the haze and shimmer off the water, except, dear reader, they didn’t look like sails. Must report accurately, I know.

Despite my slight misgivings when Steve was trying to leave Botany Bay while a container ship with two attendant tugs were entering, all went well, once the ship moved over.

Apart from the heat, and Steve’s remarkable paddle today, it was not an eventful day. Waiting at Coalcliff I was excited to see a group of seals playing, until I realised i was seeing divers’ flippers flapping in the air. Oops!

My first day after Lyns departure and I was feeling the isolation, nobody to talk to about the excellent Stanwell Park/Bald Hill coffee, or the passionfruit muffin. Oh well, life’s tough, I enjoyed them and resisted the temptation to do a selfie. The first two sips of beer at the end of the day were like angels’ tears on my tongue but we both felt we had earned it.