First job was to fix the feedback through the computer. The local computer bloke is a Climate Change Activist who boosted numbers for the Kiama presentation and went straight to the problem. While there Channel Nine Wollongong rang and arranged and interview and shoot at 11.00am. Then Illawarra Mercury rang for an interview. Warren is becoming a dab hand at being the “talent”, answers questions when he is asked, lifts the kayak when they say lift and walks when they say walk. He’s got it all eh. He even seems to have the lens cap issue under control. Not sure where my lens caps has gone though, they don’t seem to float. (only joking)

It was a short paddle into Kiama. Anne and Kim paddled out and we came in together to a rowdy crowd on the wharf. Warren managed to get a photo of his new mate George, a whopping great stingray. Many of the people had seen the event advertised, constructed signs and turned up early.

The scout hall filled quickly and we got underway. With the other talks completed I had an hour left and managed 62 minutes although the last ten minutes were done at a gallop. Enthusiasm from the kids was fantastic. They almost stampeded to get to the information table at the end. Again, applause was deafening and prolonged. We took a photo of a lad with his mum’s phone and after he ran off she told me “He said ‘thanks for bringing me mum. That was so inspiring and interesting.’ How about that, I did something right for a 13 year old.” The energy that was in the crowd was palpable, so inspiring for me. 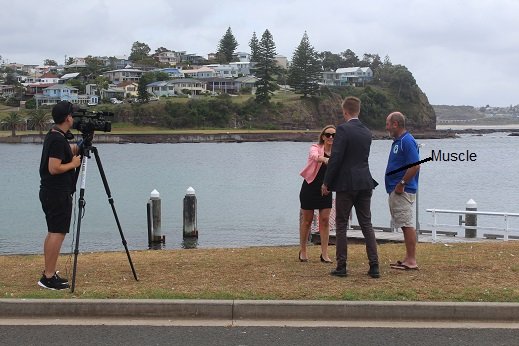 Channel 9. The camera man shocked the rest of his team and Warren by announcing he did not believe in climate change. I have some thoughts on that and how to deal with it but they won’t be popular. I think it is time to call out deniers for what they are, too gutless to accept the truth. It is a cop out. 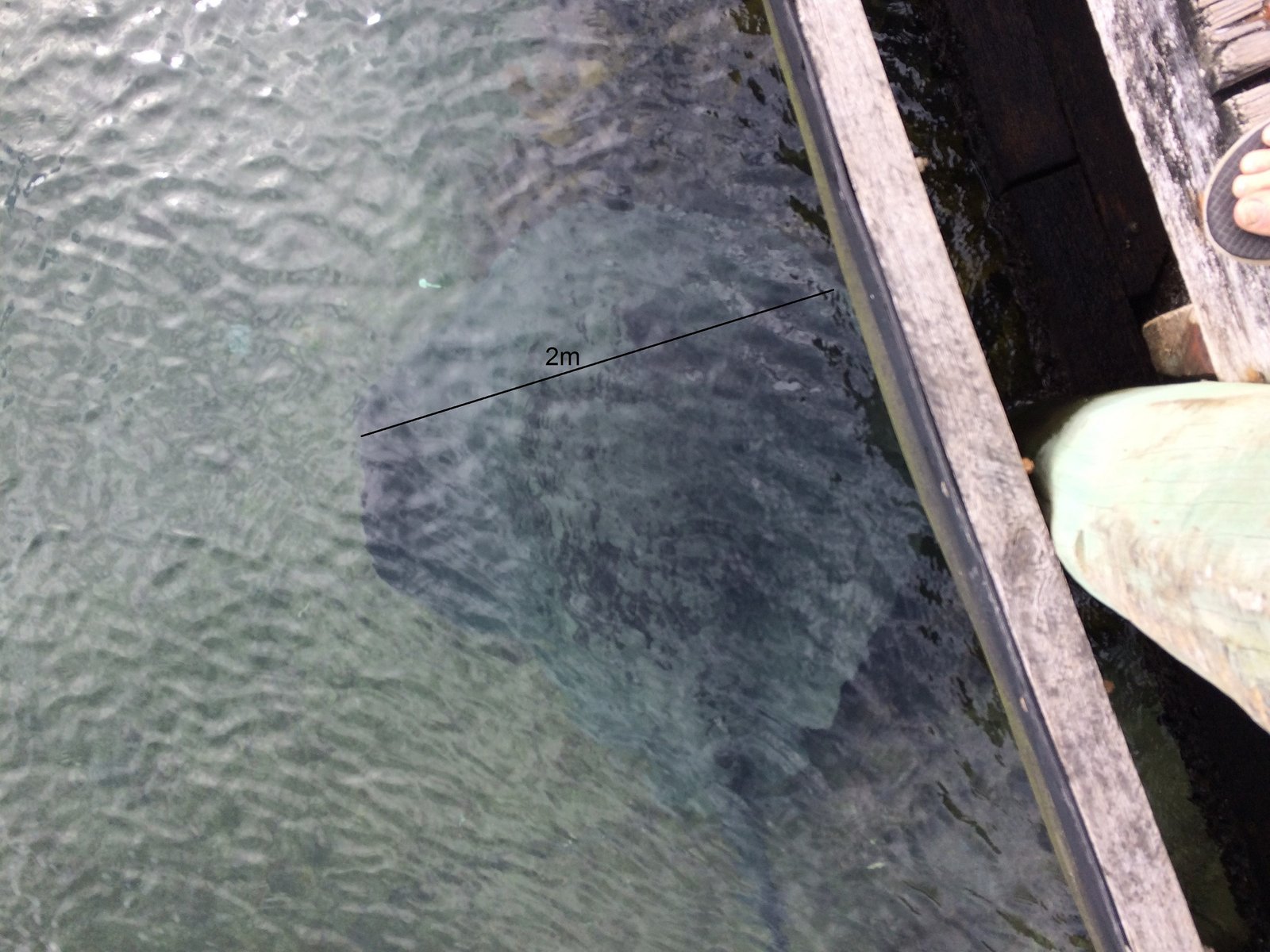 George the stingray, 2m across 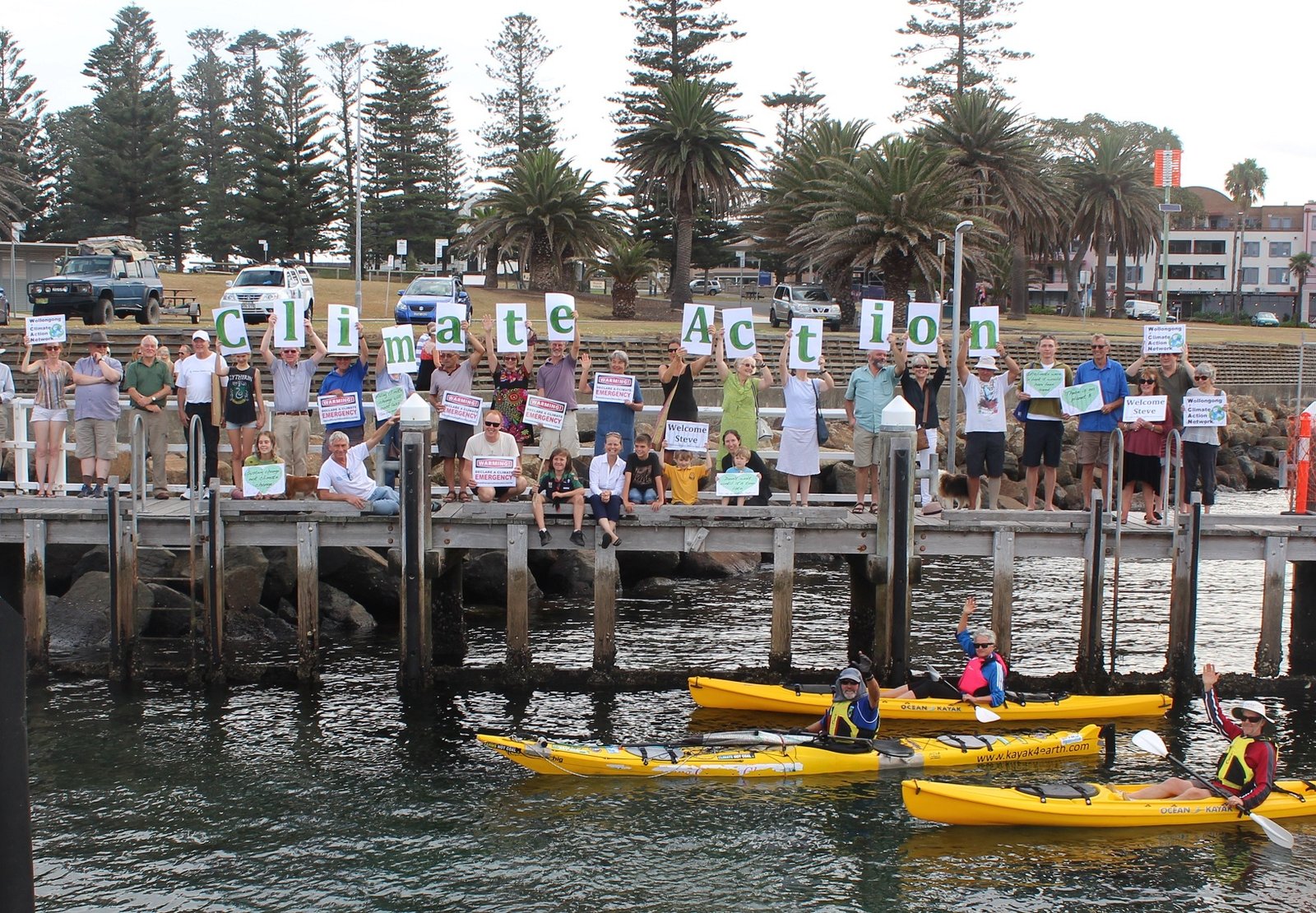 Couldn’t fit all of them in the photo 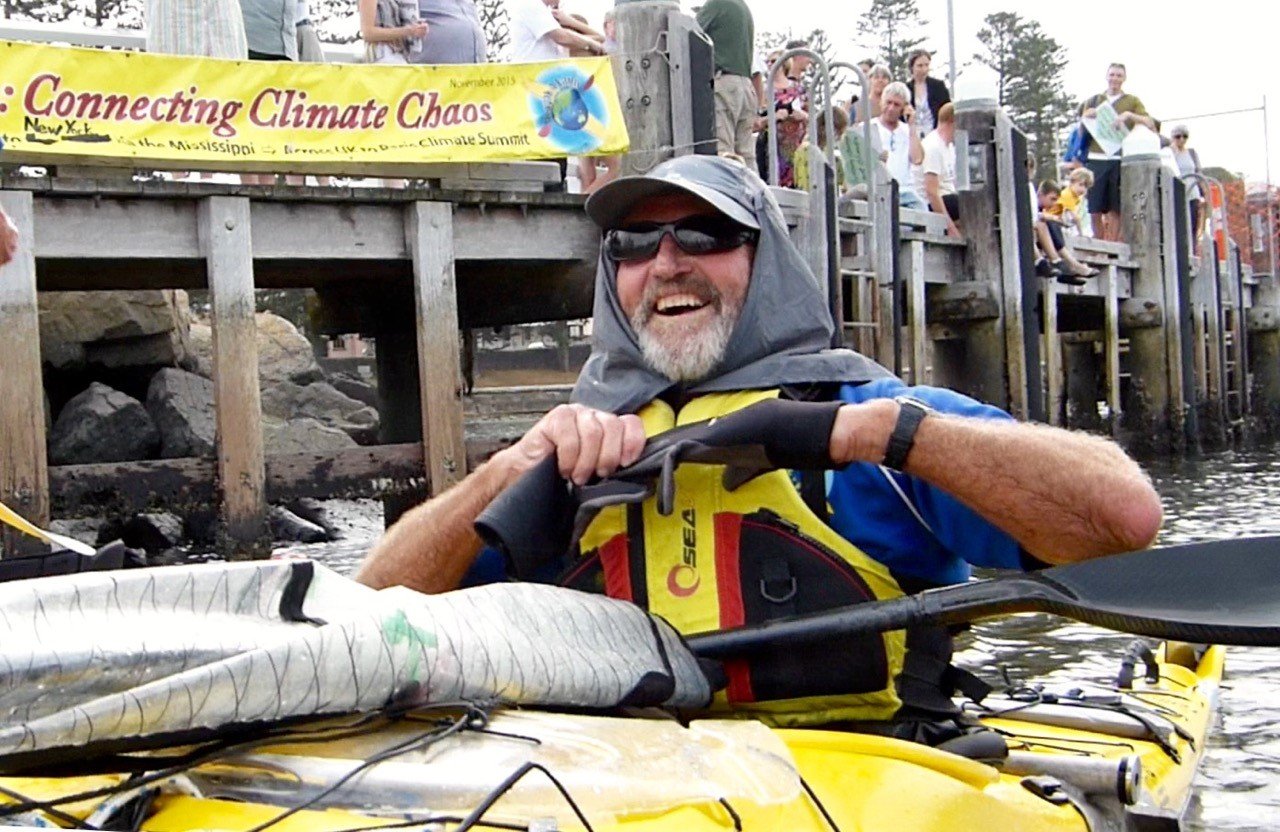 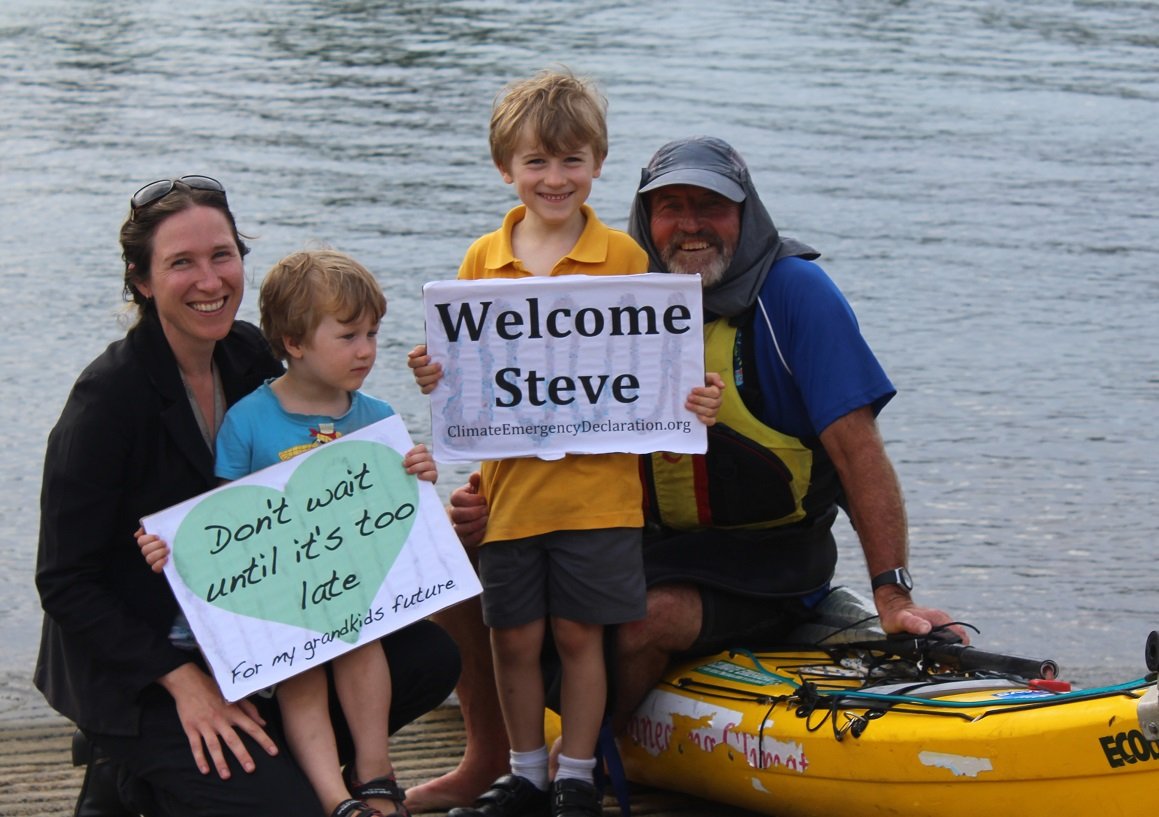 I love it when mum and the kids want a photo 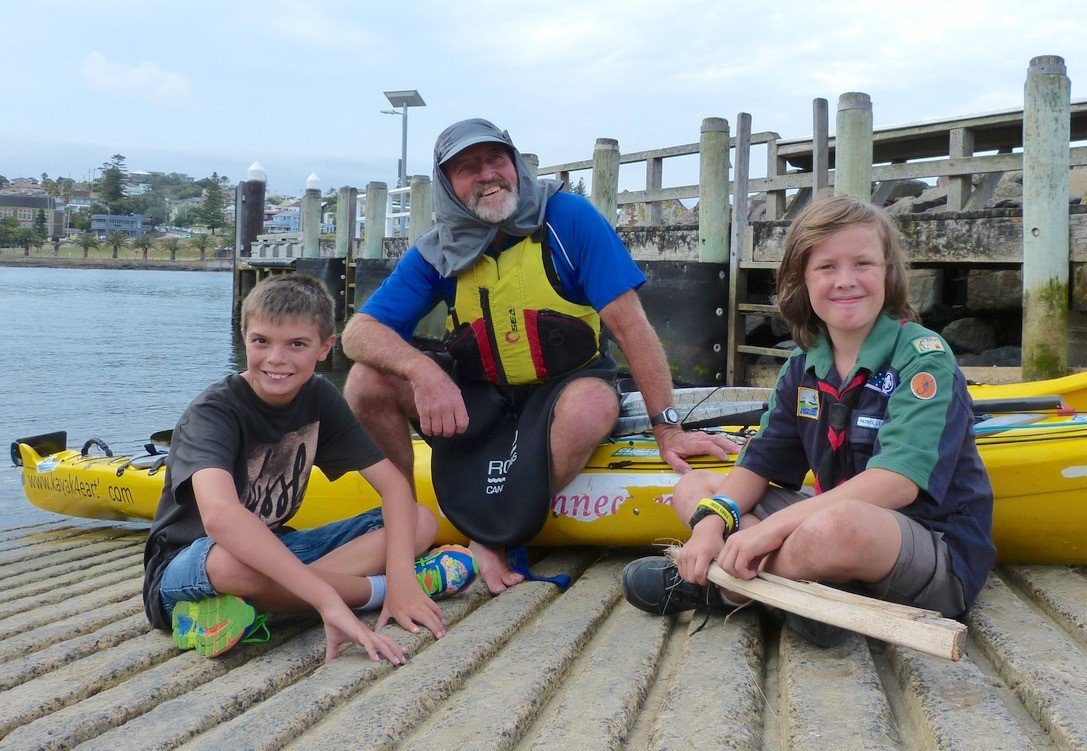 Warren took this while their mum took her photo 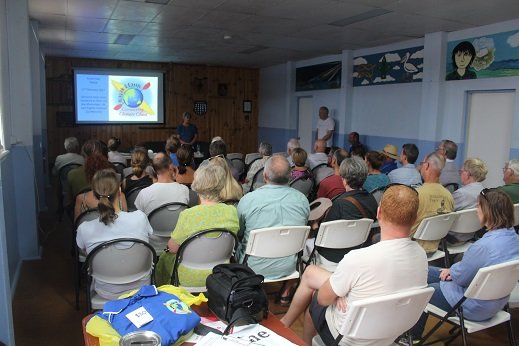 The hall was full 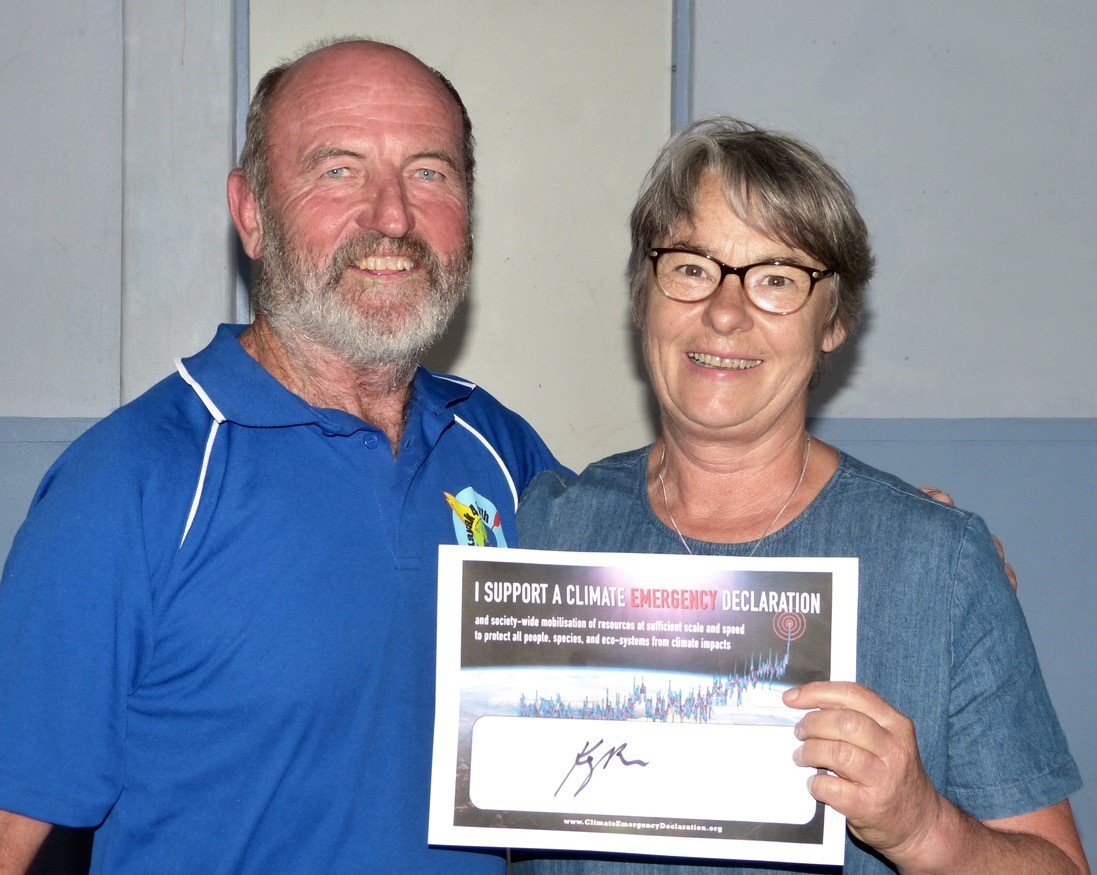 Kiama   Deputy Mayor Kathy Rice with with her signature

Warren              Another most enjoyable day, cool with showers after such hot humid weather. The day started with a phone interview of Steve by the Illawarra Mercury, which is the perfect start to his day.

As if that wasn’t motivational enough, Steve was then interviewed by Rebecca Davis from Channel Nine Wollongong. As Channel Nine is still setting up in the area, she was not able to tell us when it will be shown but they shot a lot of footage in addition to the interview.

We felt privileged that George the stingray who lives in the harbour came over to greet us. You don’t get that everywhere, and I am sure he wanted to sign the petition, he certainly would have approved.

Following on from the marvellous welcome arranged by Tom Hunt, Peter Todd and Howard Witt at Wollongong yesterday, they once again produced a great welcome for Steve. Steve was accompanied into the harbour by kayakers Anne and Kim down from Sydney for the occasion. A vocal crowd of about 50 welcomers cheered Steve into the harbour. I had cause for reflection as I had chatted to quite a number of them before Steve arrived, and many had come as a result of local media coverage, or after hearing of Steve’s trip when they signed the petition, they chose to join the welcome. Previous comments about the complete lack of interest by Sydney media were sorely reinforced. One of the Mums and her two very small sons waited for nearly an hour, the boys held placards and had photos taken with Steve. These are our youngest activists to date.

After photos we all adjourned to the scout hall on the other side of the carpark where Tom and his team had arranged a formal welcome and talk by Steve. After Tom welcomed everyone and the Deputy Mayor Kathy Rice spoke, Steve gave his talk. As at Wollongong he held them in a state of astonishment at this exploits and three young teenage boys were so excited by his exploits they kept wanting to interject with questions, and couldn’t sit still.

In what I thought was a stroke of genius, at the end of the meeting, Tom offered that anyone wanting to take blank petition sheets to gather signatures was welcome to do so. There was a rush to the table to get the blank sheets, and again, the three boys were very excited to take some, saying they would ask all their mates. That, to me, is as satisfying outcome as one could hope for.