After an early night we slept in until 6.00am. I uploaded the blogs and we still hit the water by 8.45am at Crookhaven Heads. There was very little wind as I took advantage of the outgoing tide and slipped around the headland. The sea was smooth enabling Old Yella to maintain more than 6km/hr average speed.

Gradually the wind picked up, from small riffles to small waves. The BOM said north to north easterly winds building in strength but the wind came from the south east all the way to Currarong. It was only 16.5km but it was important to do this before paddling up the river to Nowra. With a southerly buster due on Monday and a greeting at Ulladulla Tuesday the more kilometres I could get the better.

As I approached Currarong quite a few boats passed me on their way in, confirming that it was getting choppy out to sea and thus time to come in. Warren lined up at the boat ramp because that was the only suitable place to exit but had to defend his right to do that. Someone thought that a kayak didn’t count. Luckily nothing came of it because together I don’t think we are turn the other cheek type blokes.

Back to the Shoalhaven and a paddle up the river to Nowra where an enthusiastic welcoming crowd waited. Some came out on the water. David was an experienced surfer using his wife’s SUP, some were experienced and some were just keen. After the speeches we had “award winning” snags which I have to say were very good. Everywhere we go we are impressed with the enthusiasm and humbled by the efforts of many people.

The fact that the wind was still SE when NE was predicted and still shown on the BOM site was of concern but tomorrow is another date.

View at the smoko stop 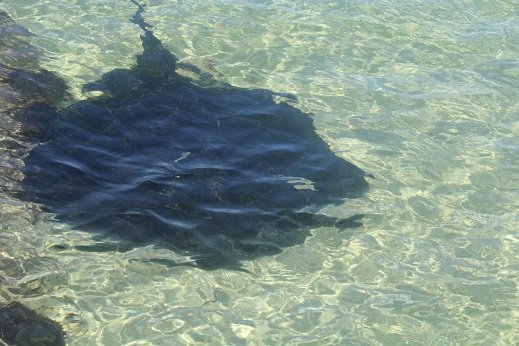 Hooray, we got ’em together 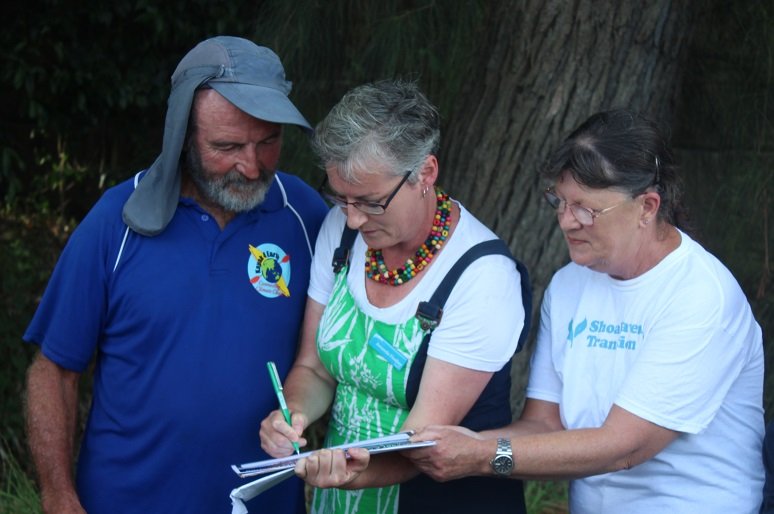 Shoalhaven mayor Amanda Findley with Trish Kahler, chief organiser and follower of K4e since before the Mississippi 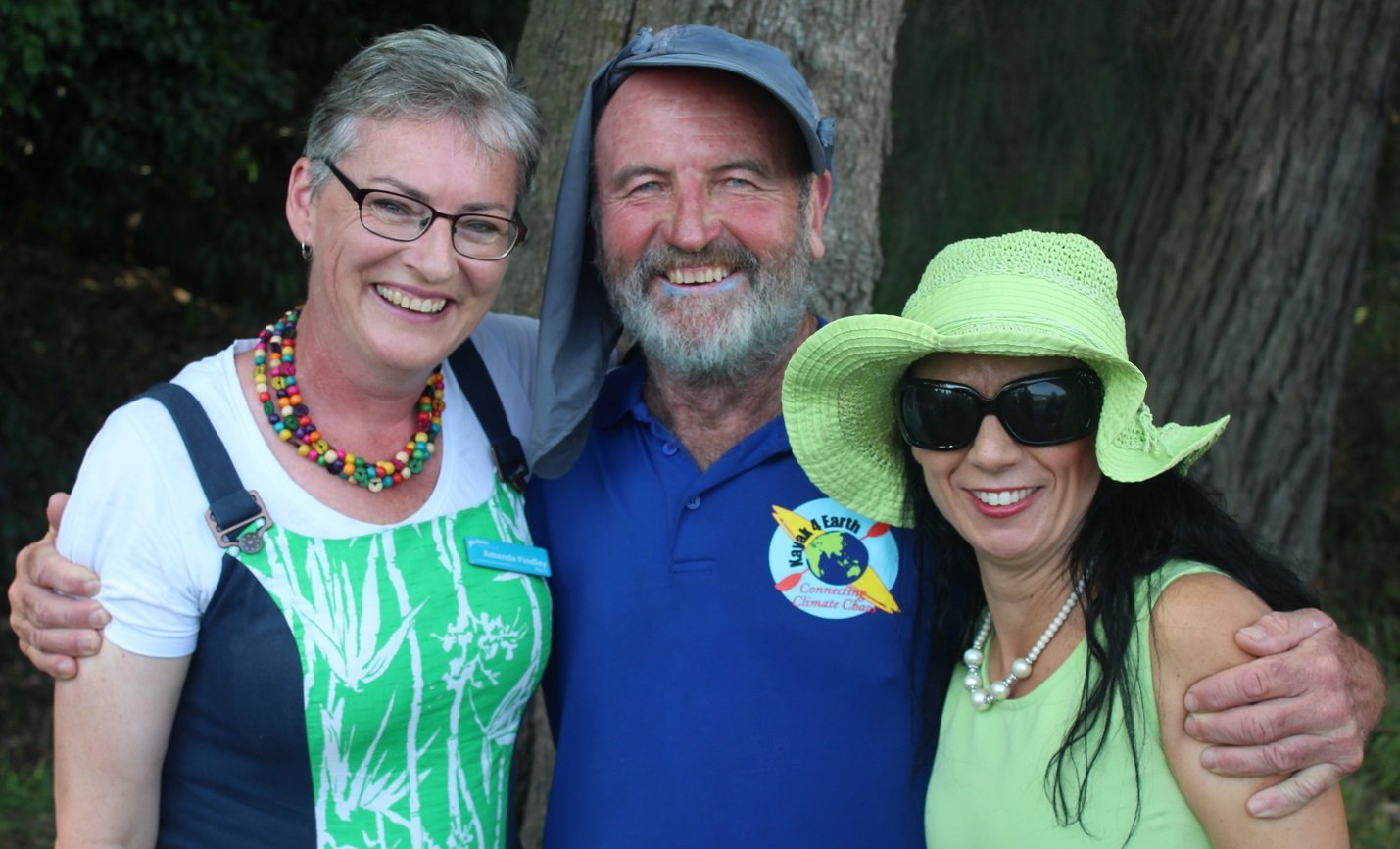 Warren         As Steve will have explained, today he needed to get some kilometres done before wind conditions changed. Before setting out, Steve did a radio interview with Kris from community radio station 2UUU.  Arriving  at Currarong, which is unknown to me, like all the other tucked away places, I stumbled on a most beautiful series of little flatbottomed beaches, separated by short reefs, or maybe they are rock platforms,  so its like a series of natural swimming baths. A local told me its always calm, with virtually no waves, and safe for kids, and therefore probably for me.

The boat ramp, I was told,  is only for the use of boats on trailers, and they’re owned by tough blokes who will have a punch up with me, but the blokes with the trailers were fine, so I am confused about what a boat is, likewise a public boat ramp, and where these tough blokes were, the ones I met were great.

I was entertained by a large stingray, maybe 1.5 metres across, it was doing laps every fifteen minutes or so around the boat ramp, seemingly as unconcerned about the tough blokes with trailers as I was. Maybe its one of George’s mates from Kiama.

Be that as it may, devoted bloggee, Steve arrived at Nowra to a rowdy welcome, having been escorted in by a paddle boarder, and three canoes containing nine people and three enthusiastic, environmentally concerned dogs, plus three kayaks.

The welcome included an acknowledgement of country and speech by The Mayor, Amanda Findley, and a speech by Trish Kahler,  the event organiser.  After a great chat under the trees, and lots of photos, stunning ones as usual, we made our way along the river bank to where Terry was doing a sausage sizzle, with gourmet snags. They were superb. It was a great and warm welcome for Steve, and despite the heat we all stood around chatting for ages. I have to thank Trish Kahler for organising a terrific event, to Terry Barratt for the sausage sizzle and helping Trish, to Jane  Richter and Judie Dean for assisting Trish; they are all members of Shoalhaven Transition, and the Greens. As well as The Mayor, Amanda Findley,  Councillor Nina Cheyne, was in attendance, and Riverwatch were represented.

Steve is a bit hyperactive, I reckon, but he is always trying to make our little camp more comfortable, and more upmarket. If you scroll to the bottom of my blog you will see his latest improvement. After hours spent Googling, Steve decided he had found the best improvement he could make for our comfort was some great portable tables, and I appreciate the thoughtfulness. He has ordered two on e-bay from the US, and we are hopeful they will arrive before Lyn takes over as support crew, I am sure she will love them. 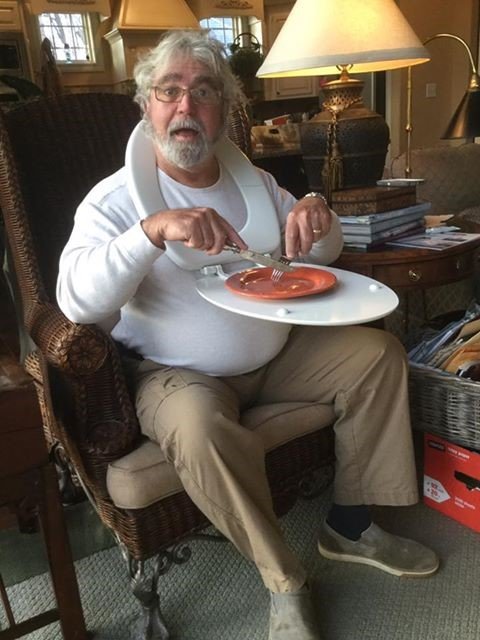