We packed up camp at the caravan park in Nowra and headed for the boat ramp at Currajong to meet people who wanted to do a send-off. I am very glad that this had been organised by Frances but I did have to tell everyone it was just a chat and we would be going to Currarong to start so that I could get to Hymans Beach on time for our welcome there.

Warren has written glowingly about Currarong and the rock pools on the shore and I totally agree. It is a magnificent place. The wind was against me as I headed out because the rocky shore faces north before turning south. Plenty of fishermen were trying their luck and I am not sure how some of them got to where they were. 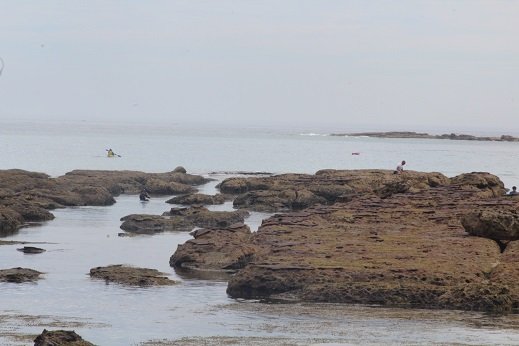 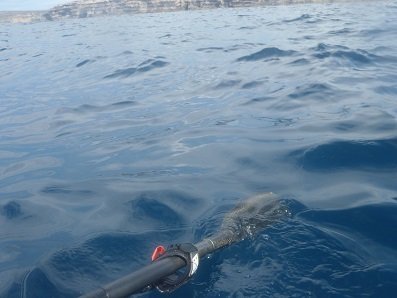 Just look at the colour of this water 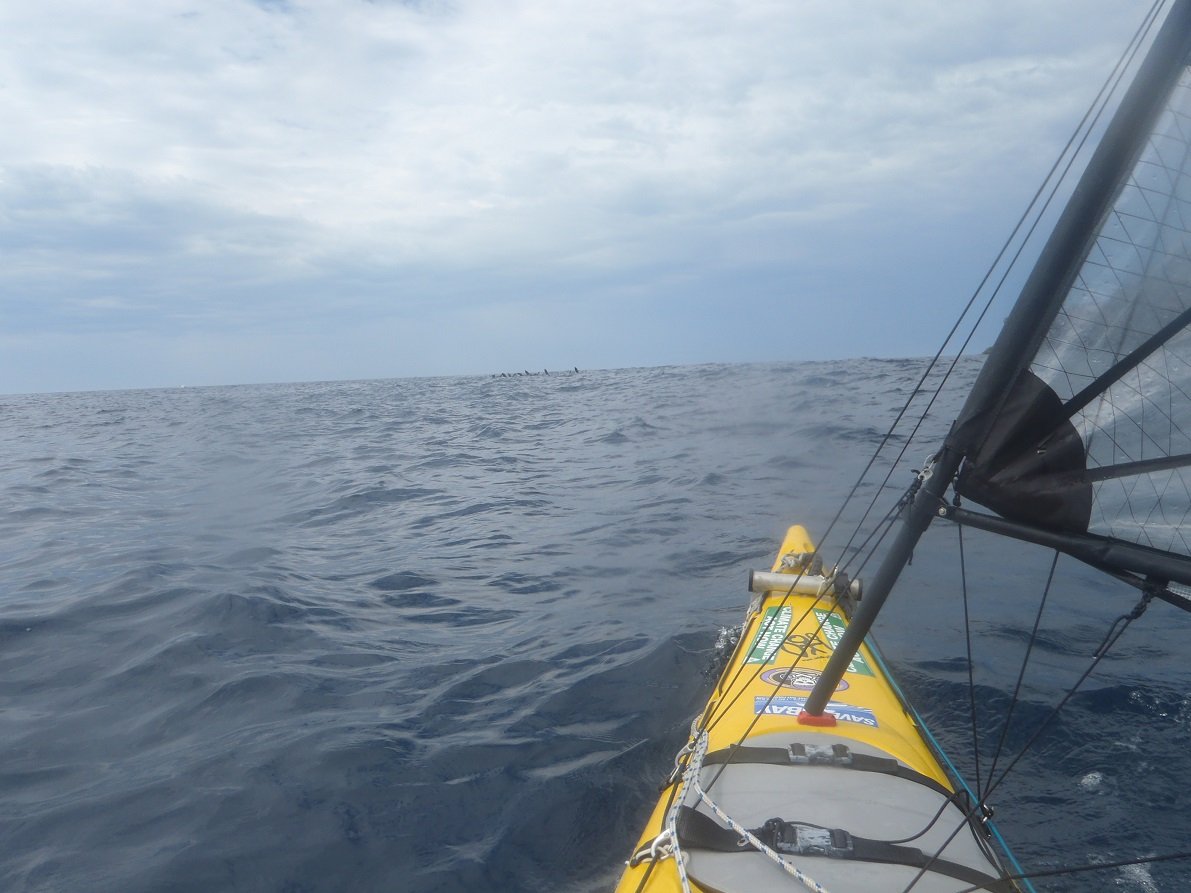 Look very closely at the horizon at 11.00 o’clock. It took me a long time to figure it out. The wind was light but I put the sail up so that I could sneak up silently. Look below for what it was. There are many collective nound for sea lions but we will call this one a bob.

See the grey-brown bodies under the fins 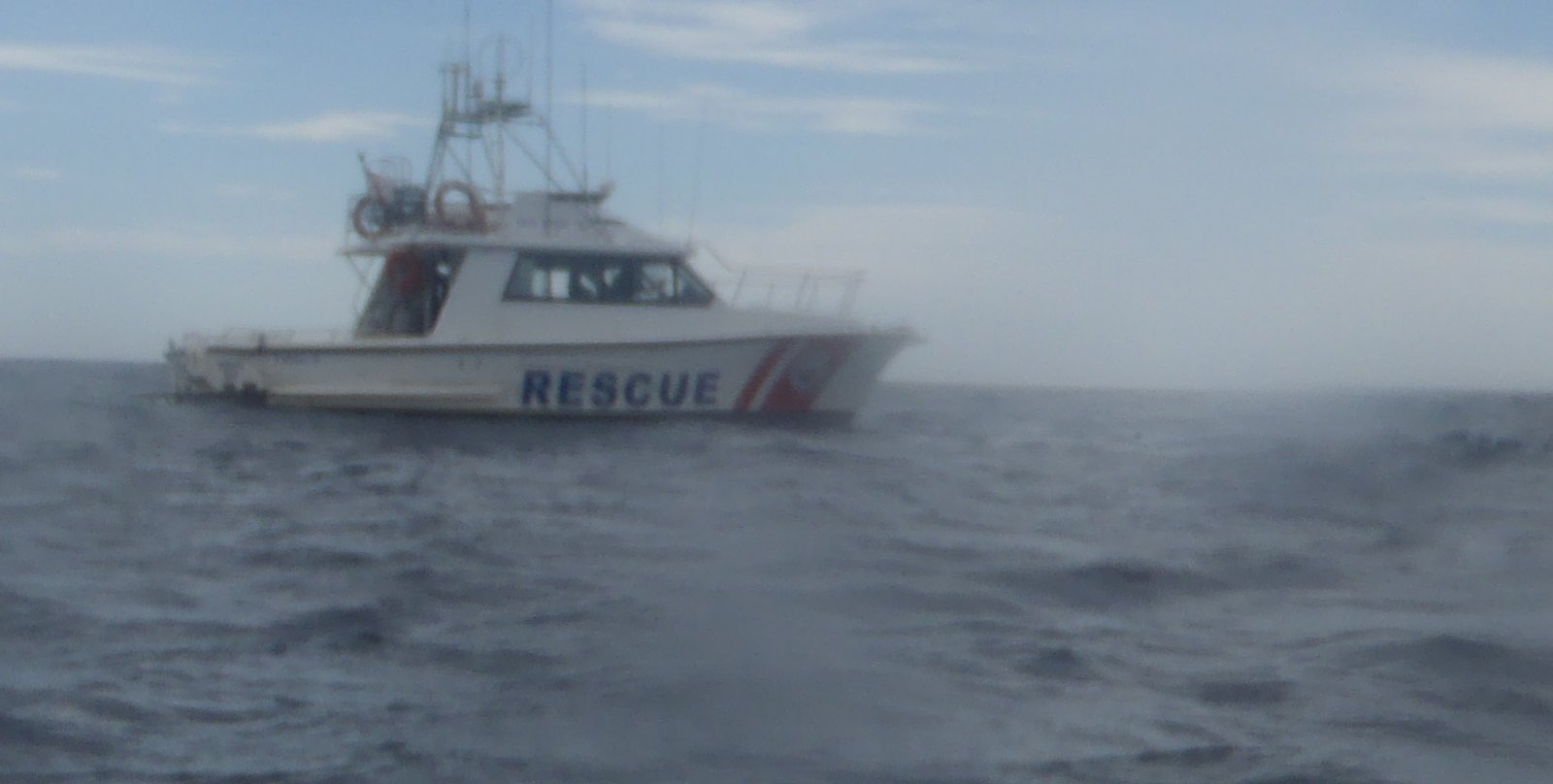 These guys came over for a chat at Point Perpendicular 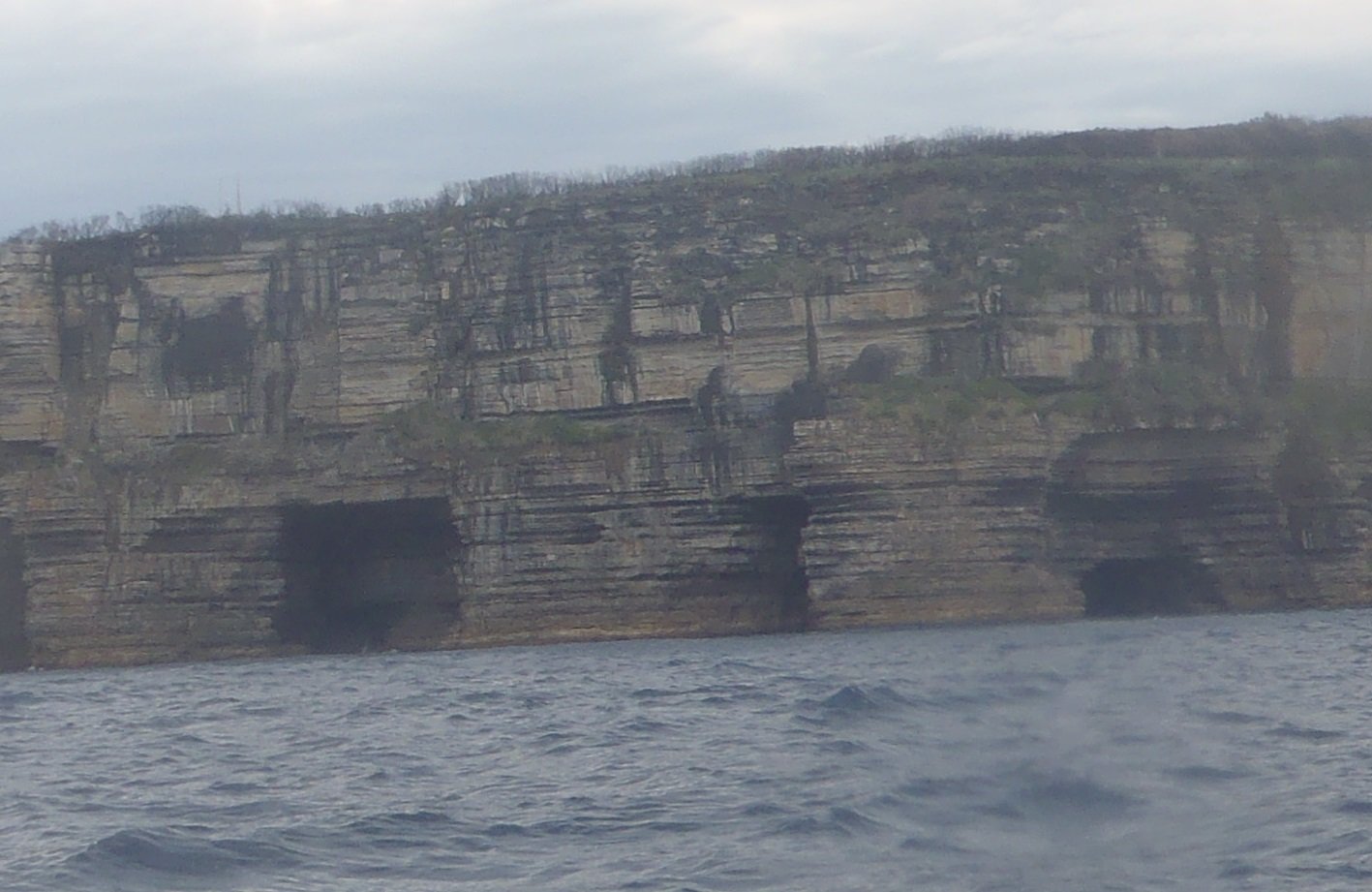 More sea caves. There are lots of them 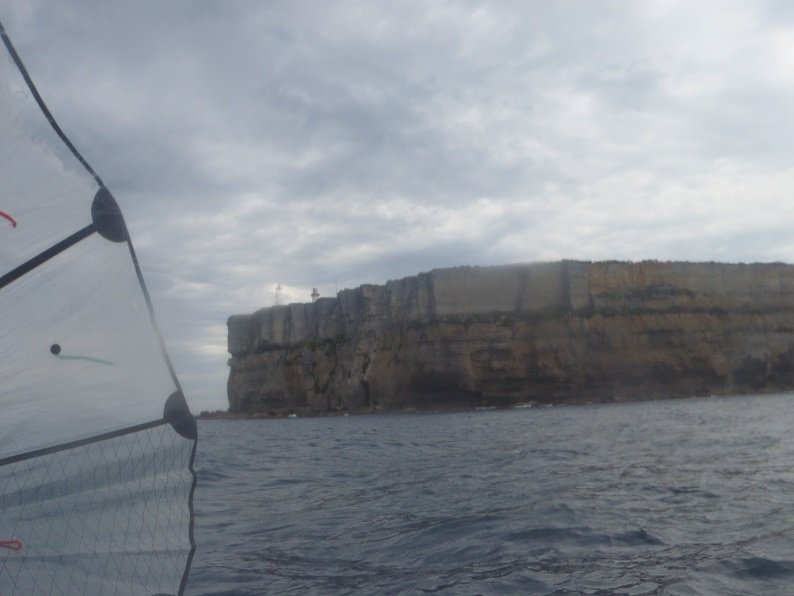 Point perpendicular lighthouse from the kayak 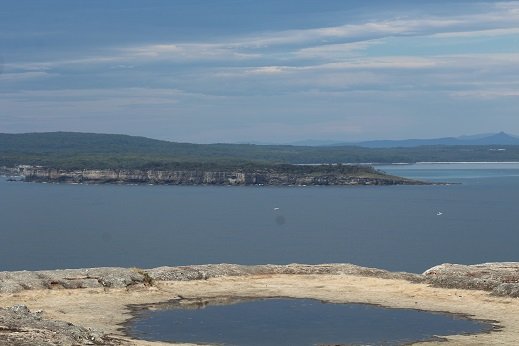 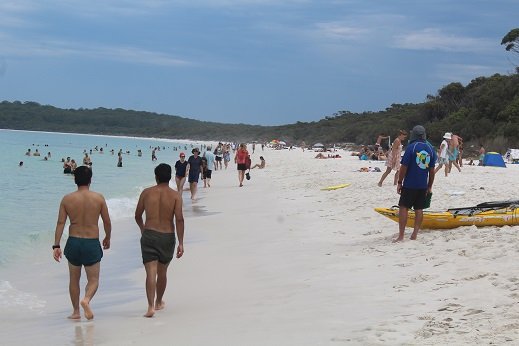 Contemplating the crowds at Hyams Beach. It is truly amazing. Sure it is a nice beach. Sure the sand is white. Sure the bay is calm and the water clear, but why drive 2 1/2 hrs to get there, line up to have a shower or go to the toilet, fight for a car space or risk a $280 fine? Beats me. 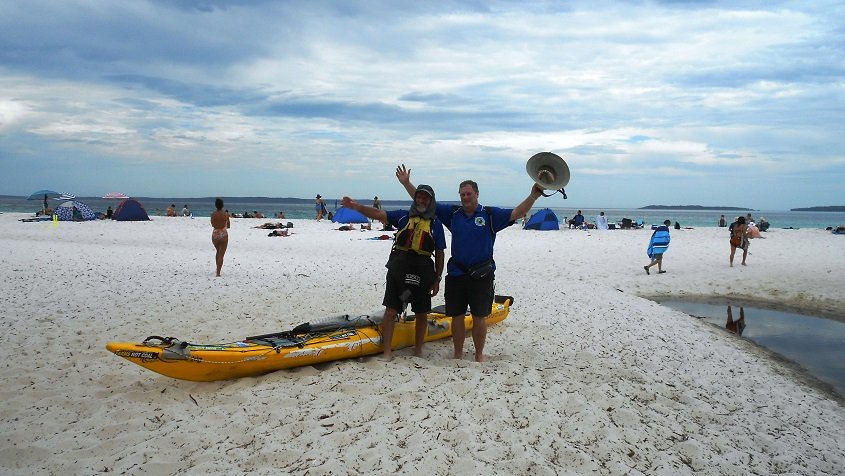 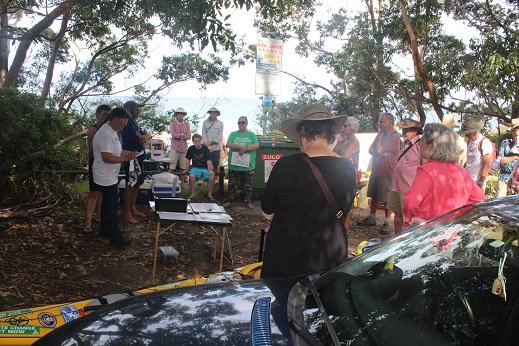 Some of the crowd at the speeches 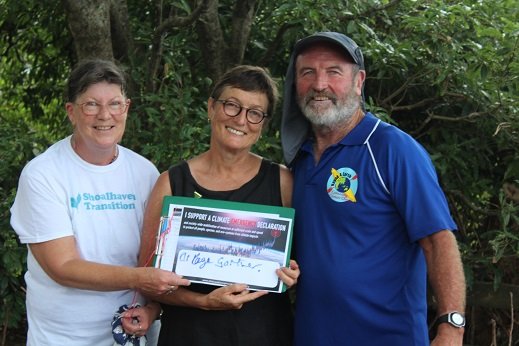 Warren        The day started with a farewell to Steve at Culburra Beach. Firstly we were given a welcome to country from Delia Lowe, a Miga Balaang, or Authoritative Woman of the Jerrinja Clan Group. Delia spoke of her childhood memories growing up on that peninsula, learning from her parents and grandparents of the traditional ways, and of the mission which was set up and where she received her western education. Delia explained how so much had changed in the physical environment in her lifetime, as well as culturally, and she lamented the loss of many fish species for example, bearing in mind her people were water and land based. Delia spoke also of the spirits of her ancestors who she said would ensure Steve a safe passage through their waters. We listened to her story, and all of us were moved by the changes, all within a single lifetime.

Following on from Delia, Frances Bray, President of the Lake Wollumboola Protection Association Inc spoke, and she too lamented the effects of climate change, and wished Steve well.

In all, there were twenty people there to farewell Steve, and it was a very motivating start to Steve’s day of paddling. The pelicans had also gathered around to wish Steve well, I am sure that’s what they were doing even though we were near the fish cleaning shed.

After a long paddle in the heat, Steve arrived at Hyams Beach on the beautiful Western shore of Jervis bay, to a wonderful welcome by 30 supporters and well-wishers. Trish had once again arranged a marvellous welcome and picnic, and after she spoke and welcomed Steve, Councillor Kaye Gartner performed an acknowledgement of country, and spoke to the hearts and minds of those present, on the issues we face, and applauding Steve’s undertaking. Steve then spoke, and it seems to me that each time he does so, he inspires people about the urgency of the problem, with facts, and with his infectious energy. I must acknowledge also the energy which Judie Dean and her helpers apply to collecting signatures, I don’t know how many they collected but it was substantial, and they succeeded in encouraging quite a few passers-by to sign and also to stop and listen to the talks.

Trish supplied a delicious selection of healthy quiches, and I thank her for her enthusiasm and energy too. We also had the opportunity to wish Trish a happy birthday, and share in a birthday cake provided by her daughter. Happy 21st, Trish.

Kaye and Jeremy Gartner kindly offered Steve and I a billet for the night, and after a much appreciated hot shower, a little alcohol and an excellent barbeque dinner, we all enjoyed a great conversation and lots of laughs well into the evening. Kaye’s sister Dale was also there and added to the occasion. Thank you so much, Kaye and Jeremy, for your wonderful hospitality.

6th February After a great night of intelligent discussion and lots of laughter, as noted by Warren, the anticipated southerly blow had not arrived. What to do????

In the end we paddled but not with the usual preparedness. I forgot my camera because I had put it in the camera case and Warren forgot to take the camera out so neither of us had a camera. Warren’s radio was an issue and mine started to crackle about lunch time even though it was turned off. Looks like it might be terminal.

A southeaster came in about 1.30pm when I was at Manyana so I headed into the beach to see how serious it would get. I asked some people on the beach where I was and after they told me I called Warren with my mobile. He arrived ten minutes later, we discussed what to do and agreed to meet at Lake Conjola. I beat him to the boat ramp by about ten minutes after sneaking inside Green Island. In 1972 I had surfed there. It is a very rare left hand point break. To get there was on a dirt road past farms with no significant development anywhere. Now houses lined the beach and there are wooden steps up to what I presume is a car park.

We would make Ulladulla for the greeting on 7th Feb after all. That had been of significant concern so we were both relieved that we were within striking distance.

Warren    Steve’s paddle to Lake Conjola was uneventful, well my part was, and he did well before the threatened Southerly arrived in the afternoon. Note to self and Steve: charge the radios and mobiles every night, not just most nights.  I’ll say no more about that.