The day started with just a few nerves. Klaas and I enjoyed the early boating report that said 3.4m waves with the occasional 6m waves. They are the ones that get you, so it was reassuring to just have a nice easy harbor paddle.

Because I was early I decided to wait near the point opposite the landing wharf but my peace and quiet lasted less than two minutes. Some bloke on the land was screaming at me:

“Get out this is naval waters.”

“Sorry mate, how far back to I have to go to get out of the area?”

“This is naval waters, go outside the yellow bouys out there in the harbour.”

“I need to stay close to shore, how far back do I have to go?”

“This is naval waters, get out there.”

“I need to stay close to land.”

“Get out of naval waters!” he yelled, while waving to a boat to come and get me.

I waved to the skipper and said “How far back doe this extend, I need to stay close to the bank?”

“This is naval waters, go outside the yellow bouys out there in the harbour”

“Just tell me how far back I have to go, I need to stay close to the bank.”

“This is naval waters, you must go outside those yellow bouys out there.”

“OK mate, if I go out there and get capsized by one of those fast boats shooting past will you come and get me?”

“No, get out of naval waters or you will be fined”

That was pretty clear. Charming eh? Obviously not employed for their intelligence.

So I sat for half an hour just outside the bouys, dodging 1m high breaking wakes from large and fast vessels while the boat stayed just inside the bouys ready to probably ram me if I slipped inside them, and the guy on the bank stood and watched.

Would have been nice to feel proud of our navy but unfortunately I was anything but.

Finally getting sick of copping water on me, I went over to Fort Denison for five minutes before Connor called and said come in.

That was the start of a great improvement. As the shape of the wharf grew, the crowd became evident. A sea of blue shirts. Goodonya Klaas, must have sold a lot of shirts. What a salesman.

I pulled in and threw Klaas the rope as pre-arranged and stepped up the ladder to a sea of people, many of whom were familiar, and tried to take it all in. We dragged the kayak up and there was Ian, a sailor and friend and ever reliable, just hovering and helping.

As I absorbed the friendship and the many, many face, I tried to thank everyone and then fell silent. Bob Brown grabbed the hiatus and made an absolutely brilliant speech which included Tony Abbott paddling us backwards on climate change and some very emotional things about me and the trip. I was truly humbled, and at the same time proud and a tiny bit choked up, but hid that bit pretty well.

Next was David Hood. Hoody is always at the ready to say a few words and he introduced the engineering aspects as well as a tribute to me.

At my turn I think I did OK, setting out the sort of thing that I have covered in my blogs, emphasizing the engineering and the need for action, the strength of character of the majority of Australians, the lack of that in our politicians and the fact that Australians are better than that.

Thanks to everyone who has supported me. I am back in Brisbane and frantically preparing to leave early Friday. Lots and lots to do.

Over for now but not out.

Bob’s the tall one, I’m the one in the skirt 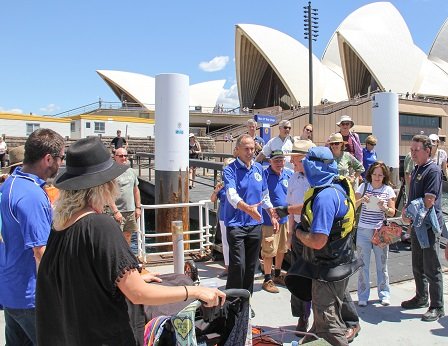 Listening to Bob. Sarina (Klaas’s daughter) is in the background 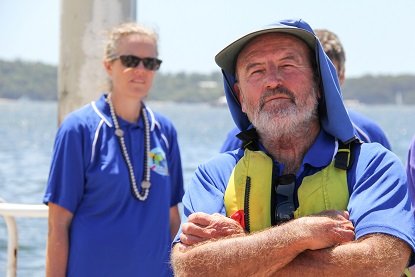 Some of the crowd 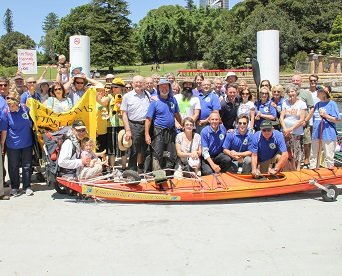 Which way to the Mississippi? 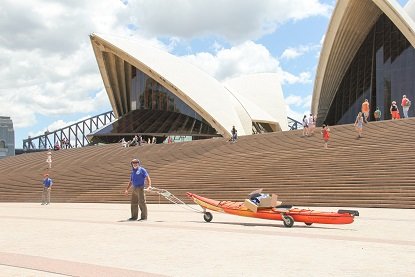