Just the boring old Hume Highway with the only potential variable being my progress so what did I do? 28k again, that’s what I did. Four very long hills (VLH) to test the legs.

Saw a couple of rabbits during the day but nothing like the many that I saw south of Goulburn. Passed a couple of dams which helps perspective. Sometimes I am unsure whether I am going uphill or downhill, so it’s quite handy that the top of the water is horizontal. At one dam an eagle stood near the edge waiting. Waiting for what I don’t know, but I wouldn’t want to be the first thing to poke its head above the water.

Blew another tyre and bearing so at the end of the day we put new bearings in three wheels.

The water drama raised its head when I tried to update the web site. Some keys not working but when the fullstop went berserk and the delete key got a mind of its own there was real trouble.

This obviously applies to others 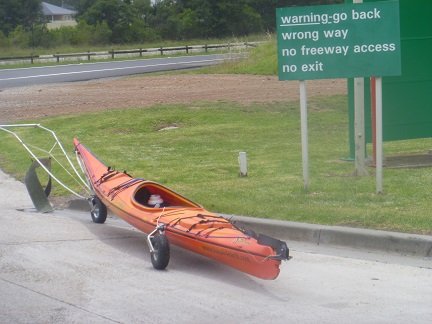