What a day. Unfortunately it was too dangerous to stop and photograph the best bits, but I have to say Macquarie Pass is spectacular. There are areas with no guard rail because there is no room for the posts and the drop is hundreds of metres. The other side is sheer rock walls.

I walked out of Donny’s at about 8.00am and set off for the mountain. A bloke called Robert walked with me for a few hundred metres as part of his daily walk. It was uphill so was good to make me walk at his pace.

Past the Robertson pie shop at the top of the hill and then it was all down for a long way. Took this shot with a great view over Lake Illawarra with the Pacific Ocean in the background if you look really hard. 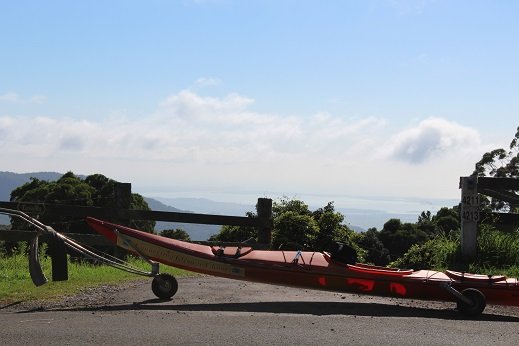 The road continues for a few kilometres before the pass starts. The pass is 8k long with an average of 10% grade. At the inside of the hairpins it is about twice that. We had one highway patrol check us out near the top and another about ¾ of the way down. He was a nice young copper (they are all young these days) and we had a quick chat about what I was doing before traffic forced him to take off. 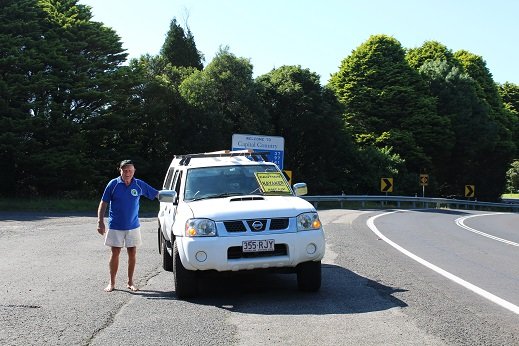 Met Klaas a couple of times on the way down in the odd place that he could get off the road. I think the sign works. People do a double take when they see it. All the truckies were fine but there were a few dickheads who thought they owned the road. Two young blokes driving slowly up the hill, slowly because they were behind a truck, yelled out “Dickhead”. Charming.

One of the few places to stop. 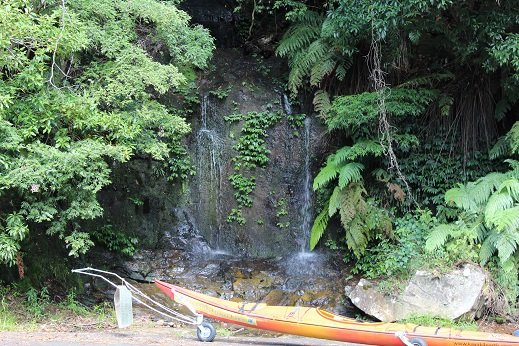 Only got 19km for the day because I really struggled after the mountain. Still about 5km out of Albion Park and I think about 9km to the water where the media will be tomorrow at 9.00am. Not a good place for entry but it’s the closest.

The computer battery totally died so found a place at Windang called Computer Town They didn’t have one in stock but Mick fixed me up with an old one for free which seems to do the job. At least the computer doesn’t turn straight off if the power lead falls out.

Klaas:  Here we are in one piece down the mountain. Back on the coast. The Maquarie Pass is possibly the steepest, most treacherous road in the entire universe. From Robertson down to Dapto it winds down with up to 180* bends and no berm anywhere. It is so narrow in places that two fleas have difficulty passing. I was send down the mountain and find a spot where I could park facing the traffic and display a sign saying ” CAUTION, KAYACK AHEAD” Steve then caught up to me and I went down another few kilometres and so forth. Enormous trucks, cars and motorcycles roar up the Pass and I was a nervous wreck at the end when finally he reached the bottom. Any minute I envisaged myself scraping his remains off the road and sending them to a good nut doctor to see what makes him tick. As it was bloody hot sitting in the car all day and to celebrate the fact he has walked pulling the kayak from Canberra to hear, I insisted I buy a motel room for the night and celebrate with a Bistro lunch. Tomorrow is another day and he will be paddling across Lake Illawarra to the sea, or not, depending on wind and tides.xxxxxxxxxx