Everyone was talking about storms. They thought I was crazy to be going out when storms were forecast. True, I didn’t see too many people and one that I did see walking in Washington NC told me to be careful of the storms that were coming.

Paddling down our creek 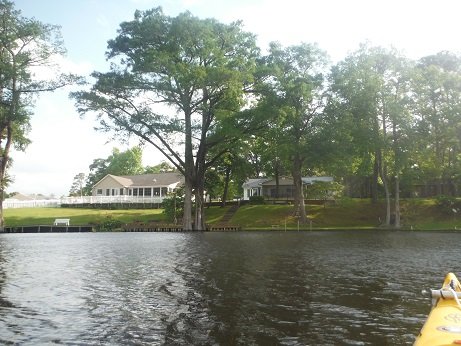 Having a breather behind some trees 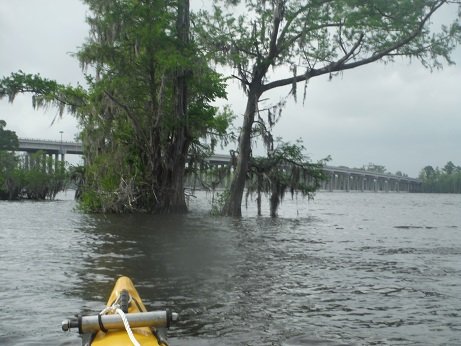 I was paddling directly into wind which was like a 20 knot southerly so there was a bit of hard work but it wasn’t at sea. It was like when I paddled across Myall Lakes into a strong sou’easter on my way to Sydney or when I set off across Lake Alexandrina into a sou’wester.

Coming into Washington I noticed that there was an abnormally high tide because the lawns at the houses had about 15cm of water on them. I mused that maybe this was a storm surge so I had better just keep my wits about me. 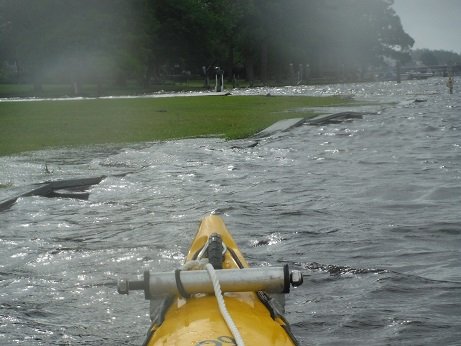 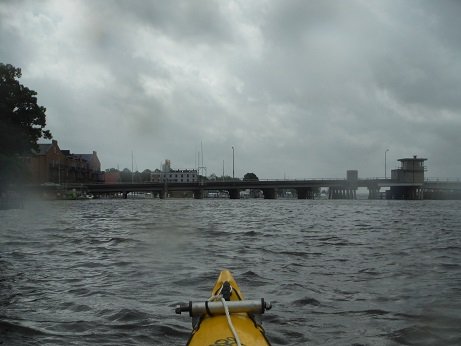 The railway bridge was open 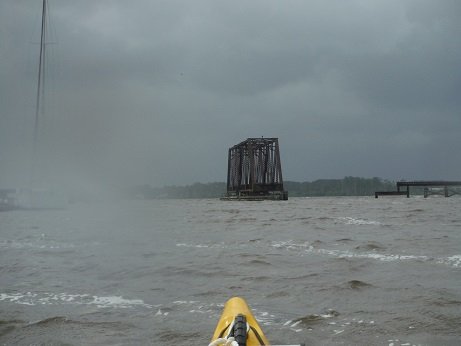 After I had paddled under the railway bridge the sky looked ominous to the south east, dead ahead. The land disappeared so it seemed prudent to get ready for a downpour. A bridge was handy and I pulled in with a minute or two before it started bucketing down. It was quite cosy, apart from the sand flies but a few gusts of wind soon got rid of them.

As the rain eased something came round the pylon straight at me. “Bloody hell,” I thought, “not a moccasin!” I quickly paddled backwards only to realise it was just a stick. With that little heart flutter over I set off again with the wind down to less than 5 knots. It was bouncy but my speed was about 8km/hr.

It was pretty good for about half an hour and then the land ahead disappeared again and I needed shelter. A boat shed was about half a kilometre ahead so I sprinted for that and slipped under the roof, again with a minute or so to spare. The wind blew, the rain bucketed down and again I was snug as a bug in a rug.

Heading for the boat shed 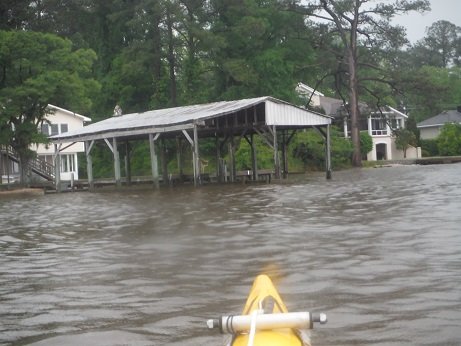 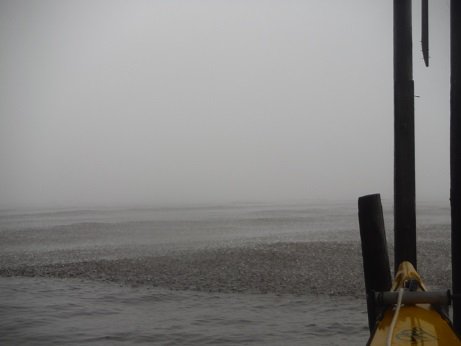 Eventually, after many peals of thunder but no lightning to see, the rain eased and I was off again. After about 2km the last of the houses appeared and I was about to set off for 20km of wilderness. Unfortunately the wind had picked up and was around 25-20 knots and only an idiot paddles against that stuff. 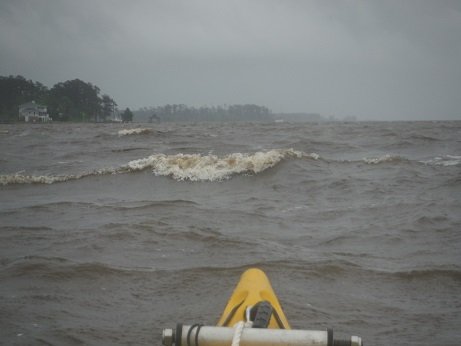 I pulled into the bank with waves crashing all around and called it a day. It sort of looked like cyclone weather, like I was on the edge of something, but my confidence in reading northern hemisphere weather was about zero. Being soaked through I headed for the nearest motel. They had a bath and wanted $69 for a room. The bath was small but I could lie down and soak up the warmth. It was worth every cent. After that I looked at the weather channel which had what I would have called a cyclone on it; big spiralling cloudes. They were calling it Tropical Storm Ana with wind gusts at the centre of 60mph. Seems like it passed through to the south and headed north west.

Next morning looked the same on the weather channel. The wind blew, it was raining and it still had edge of cyclone feel about it. Turned out it was the earliest tropical storm they had ever had.

It turned into a rain depression well after it crossed the coast. The coast is ill defined because of the huge sounds (bays) slicing into the land, so that explains why it didn’t do that as quickly as a cyclone does at home. Seems like a tropical storm is getting close to what we would call a category 1 cyclone but a hurricane is a lot worse.