The chef has had a hissy fit.  Can’t say I blame him though. Everything he touches has sugar in it. First it was coconut cream that tasted like brown sugar. Now the organic beans taste like sugar. He’ll get over it and with his idea of adding sour cream and some curry to his dish it tasted great.

Soaking wet again after a mixed, but mostly foggy day

There’s a pool of water on my seat Con. Wet bum from minute one! 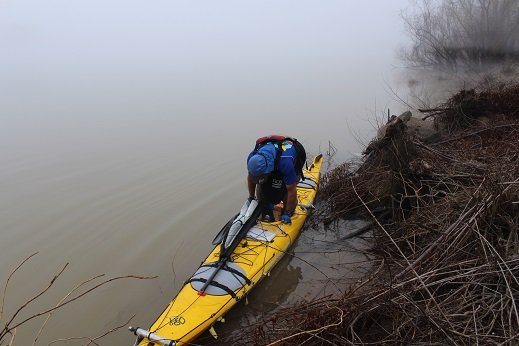 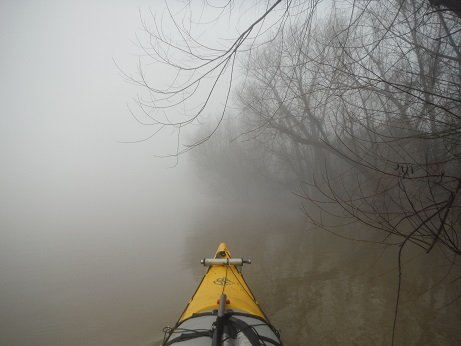 First trip out into the current coming up 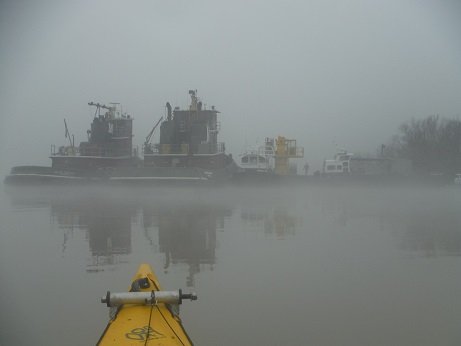 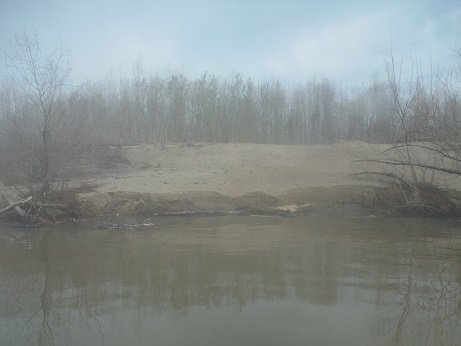 What do you see? Nothing. The lighter patch is the sun coming through. The reeds disappeared and this is what I saw. Nuthin’ 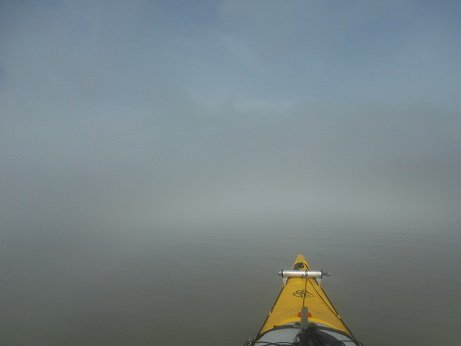 Some sort of weather station 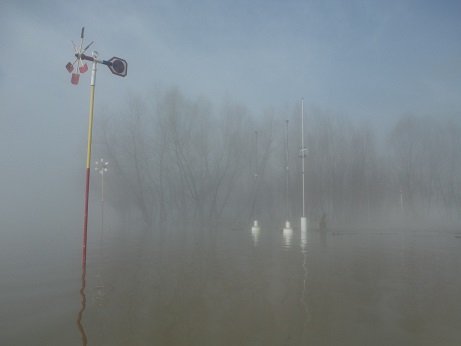 The fog cleared in a minute  when the wind came towards me. Here I am in an eddy carrying me upstream 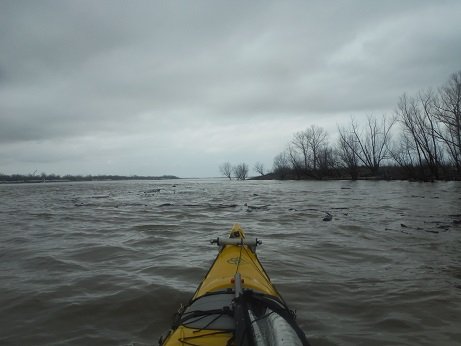 Amazing what can come around the corner 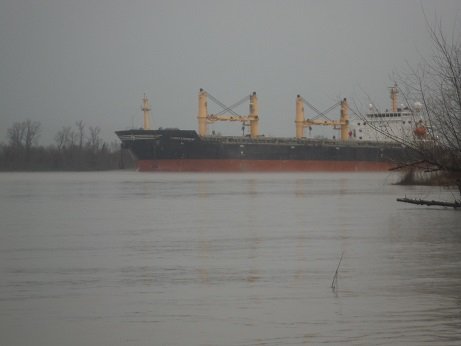 Look really closely. Behind the barges you can see black posts. This is very important. It usually means I can get behind them 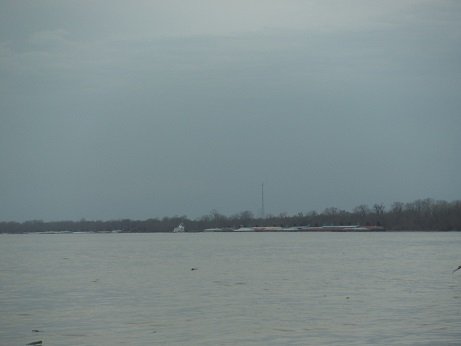 Here comes the fog. It had rolled over me enveloping everything within a minute 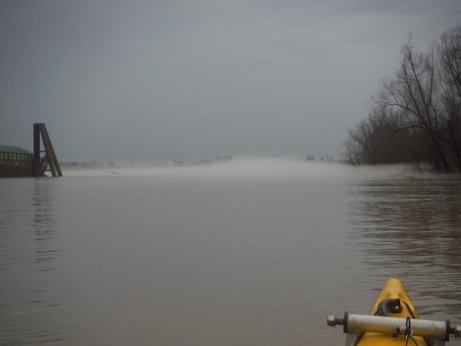 Looking back. Just after the start the skipper of the pusher came to the edge of the barge and said “Hey buddy these are all moving towards the bank. You need to get outta here”. I wasn’t going back, the barges were mostly full and drawing 3m and even if they did hit the bank I reckoned I could just get the kayak out of the water. I paddled furiously and took this shot with some relief 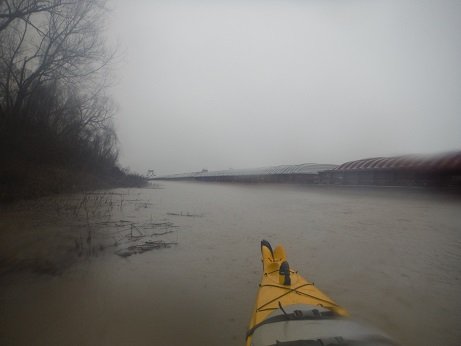 No way through here. They were nine wide and six barges long and I was mighty relieved to get around them and back in after about ten minutes slog. 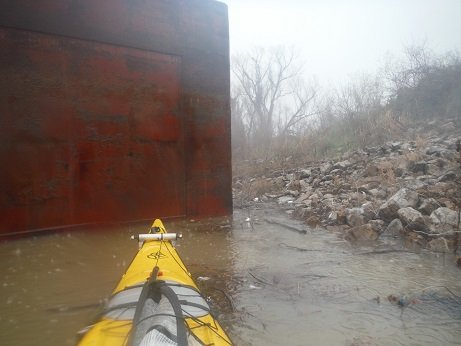 I just liked this shot 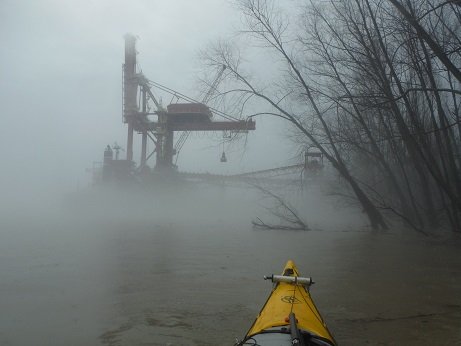 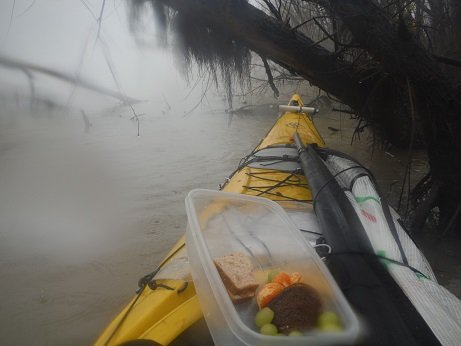 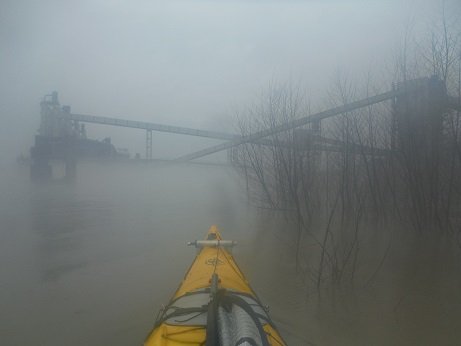 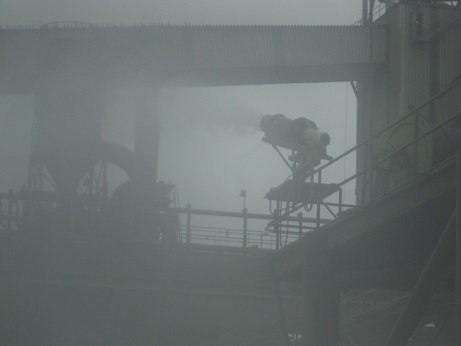 Look through the trees. The levee separates the two worlds. On the other side here is suburbia 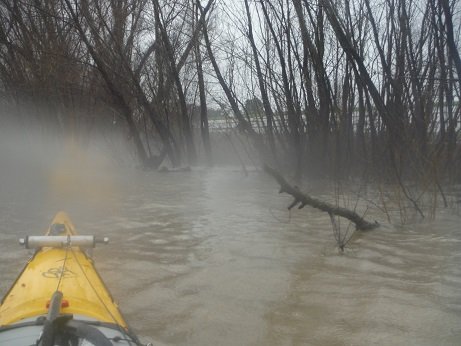 End of the day looms finally. The cranes are on a ship. 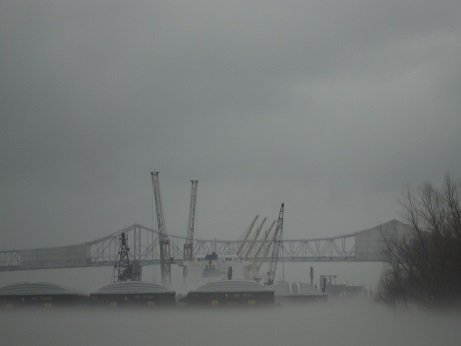 Perfect timing Klaas. We are directly under the bridge here 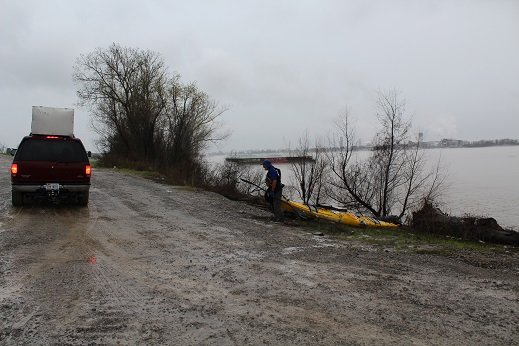 Had my first river moment today ie the first time where I was challenged by the natural river, not man made things. There was a sharp corner, the only one I have seen. Two metres of mud cliff, boiling current with whirlpools, waves slapping against the cliff and booming back from caverns and thunderclaps overhead. That was a bit over the top I thought because it was all fine, much easier than the dreaded barges.

Also had my first scary bit. It was really gloomy under a wharf and some sort of grey liquid was cascading down. The other end seemed blocked by scaffolding and logs so I retreated back down the river and went around.

Klaas:   To all you ” Doubting Thomas’s “a message from me. You all said it was impossible to kayak up the  Mississippi against a five knot currant etc ,so now eat your heart out. Stevie the Wonder boy is clocking up twenty miles (No, not kilometres) per day and sometimes more. Wind, hail, waves, he still does it. How he does it I don’t know but it is time you started to recognise his achievements and tell him so. Go on, send him an email and let him know. Klaas.