Rain was falling heavily as we drove up to the ramp. Klaas got out but I suggested he let me get wet as he had to wait at the pickup point. The old Australian saying of not having the brains to come in out of the rain came to mind but I was far too polite to say that. Anyway he did stay in the car until it eased, by which time I was ready to go. It was still too wet for him to use the land camera though.

There have been quite a few pictures of barges but no quantifiable size so for Rod:

They are about 200ft long x 35ft wide x16ft high drawing as low as 18” empty and about 11ft when full. Some have a box front, some curve upwards. The ones curving upwards would certainly suck a kayak under it if caught. Typically a pusher will push three barges wide x six barges long but it can be much more than that. There are thousands of them along the banks, some pushed right onto the bank, some moored a little way out. This can be a single barge but usually at least six long by six wide.

This morning I had to paddle around approximately ten barge sites. The one that was memorable was eight barges wide so out I went, along past five barges long and met some guys sheltering out of the rain. We had a brief hello then out another two wide then around a pusher hooked up two barges ahead. That’s ten barges plus a pusher wide and seven barges long plus another three before I could head towards the bank. As I passed the pusher the skipper, pilot I think they are called, said hello. I used a certain strong adjective to describe his barges. I haven’t seen that word amuse people before but he sure thought it was funny. 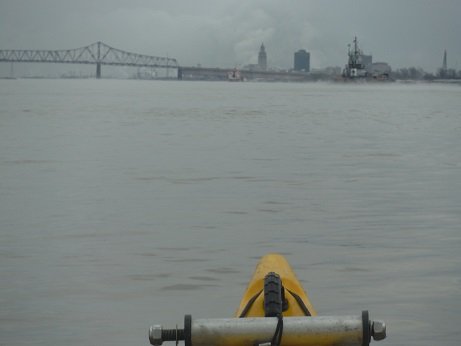 It had been raining until then but the rain eased. Half an hour later the fog returned.

The city and everything else disappears 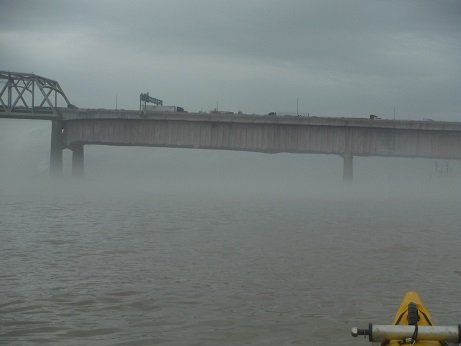 When I pulled in there was a cameraman from TV station WBRZ, so I guess that goes on the news tonight.

Only 7km travelled in 1½ hrs, much of the time travelling at about 9km/hr over the water.

This afternoon I recorded two long interviews with a local radio station WHYR. Doug Daigle was the interviewer and the sound man was Bruce Morgan. It was done in Bruce’s home. Both are lovely blokes. Bruce learned his skills doing books for the blind. He is a fair bit older than me so obviously retired and coincidentally we both have five grandchildren. Despite his modest means he gave me $100 for the trip which was very touching.

We are starting to get good non-mainstream coverage. 100,000 followers on this one:

You will have to scroll down to see the K4e story.

Klaas:  Hi all  It is Friday “Blurb time” Now there are good blurbs and bad blurbs and half way in between blurbs. This is a special only half a day blurb because the master kayak-er had only an hour and half to the finish to the heart of Baton Rouge. At least there was one TV Channel there to meet him and not before time. The media has been conspicuous by there absence. He did some interviews on radio but few and far between. Tonight Lynne joins the crew, and tomorrow we have been invited to the Saint Patrick day parade which is a big deal apparently in these parts. So dont expect a blurb from me tomorrow as I will be busy entertaining Lynne and drinking green beer. Hic cheers Klaas