Well I reckon we are just about under control. A lot has been achieved in two weeks.

Thursday was finally pick up day for the kayak. We drove down to Houston to a warehouse. I had all the paperwork, had paid all of the enormous costs including 26% duty on Klaas’s old underpants but none on the kayak. It took about half an hour to actually bring the crate out. Talk about a cat on a hot tin roof. It would have had nothing on me prancing around waiting until I actually saw the crate on a forklift high up over the other boxes and over a hundred metres down the warehouse. It eventually came into view with the forklift pushing it along the concrete. Half an hour later were gone, after unloading all the heavy stuff and having it lifted onto the roof racks. There was a bit of damage and absolutely everything had been taken apart, although I don’t think they opened the plastic bags with Klaas’s clothes in them.

It cost about $4k to get the crate here and as most of that was in fees and charges, not the freight, I guess we will cop the same from Canada to the UK.

We are booked in at an RV Park in New Orleans for Monday night and will leave here long before dawn that morning.

The travel trailer is huge and weighs 3t dry so the towing gear is pretty serious. Next week I will post some shots of the inside.

This isn’t a big one for over here. 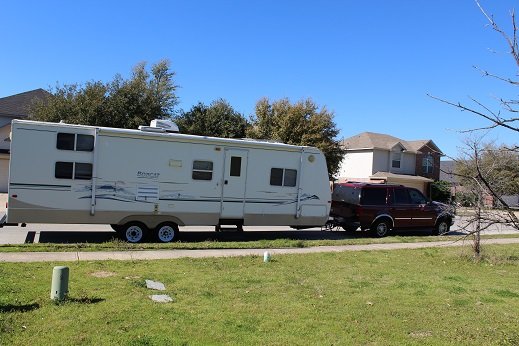 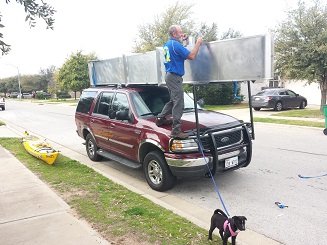 Are you sure you know what you’re doin’? 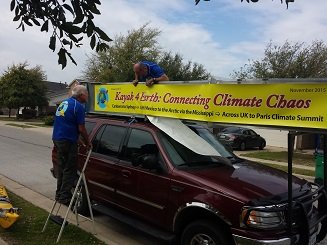 Of course, just pull that bit down will ya. 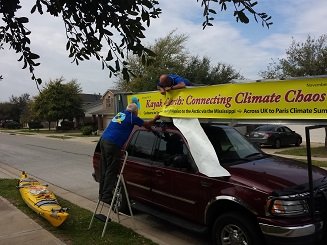 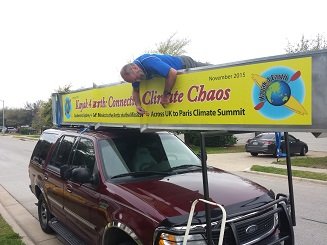 We won’t get a job applying stickers but they work 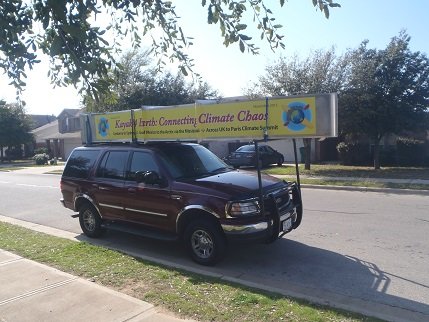 Told you Nick was tall. 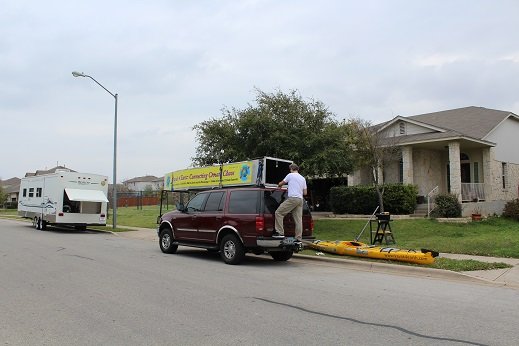 The new sail and I think we have it right. 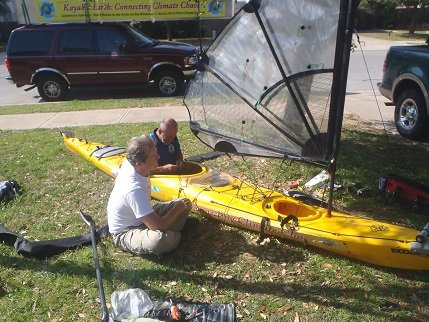 Hi all. Busy busy busy. Stevie Wonder is his usual maniacal self, running around like a ” Blue arsed fly “. Purchasing last minute things after we picked up the caravan, (Travel Trailer in this country) only a ten hour return journey to Houston and me trying to fit it all in and secure so it does not fly around while traveling. This morning, while travelling from the trailer park where we stayed two days to my son’s place, on arriving and opening the caravan door we were met with a site I won’t forget. Stupid me, yes I know, past my use by date, forgot to secure the pantry door and it spilled all onto the floor, braking a litre bottle of the finest cold pressed olive oil and the entire floor was covered in it., and all the tins, bottles, packages and cans were covered in oil, where they had been rolling around. Six thousand rolls of kitchen paper later most of it was gone. But it was still like a skating ring but a hot bath with detergent finally fixed it. Stupid old man. Won’t do that again, will I? After washing all the contents and drying them of I finally had my pantry back in order .I think I need to sit down and have a cuppa (Don’t you believe it)