On my way at last. Mixed feelings, lots of unknowns ahead, great sadness that Klaas is not here, interesting learning experience with shock jock this morning, only one TV station which is very strange given previous experience on lesser trips, walking past parliament house where our elected leaders are so disappointing in their intellectual capacity.

This morning started at 2CC with Mark Parton. His first approach was to assert that there were previously higher temperatures in the 1800s in Australia than now. I made the mistake of saying that the records were not in reliable standard Stevenson Boxes. I should have tried to explain that a few outliers mean very little in statistics, it is the area under the upper extremities of a normal distribution curve, but given the quality of the phone call from a listener it is unlikely this would have been understood.

He then tried the other tack that we had no chance of keeping below 2 degrees warming and I find it really difficult to assert that we will. We do, however, need to try as hard as we can to frustrate the deniers that seem hell bent on destroying civilization as we know it.

Anyway it was a good learning experience, especially when the interview was finished. In the many scores of studio interviews I have done none ever ended like this. Mark thanked me on the mike and then moved onto another story without looking in my direction at all. I stood up and looked through the window to the producer to see what I should do but he was on the phone. His name is Rod Henshaw, an old hero of mine from TV and radio and his story especially about Nauru is worth googling. So, after standing around like a stale bottle of piss for a couple of minutes I made my exit and took a call on Rod’s phone. The bloke just wanted to abuse me, which is fine but reflects poorly on him. Rod saved me by saying he needed the phone. Shame his presenter did not have similar manners.

There was a good crowd at Engineering House and both Brent Jackson and David Hood made excellent speeches. What they had to say really needs to be in mainstream media, the role of engineering to build a sustainable, strong economy. News just in from Hoody is that the WIN TV coverage was excellent.

Walking through Canberra was easy. Parliament House, Lake Burleigh Griffin, Black Mountain Tower in the background, but no fountain. Obviously miss timed that. From the centre of Canberra it is all uphill, getting steeper and steeper for about 10km. The temperature was going up, I was feeling the strain and I recalled an incident in the UK that helps explain the difference between the flat and the hills.

In the early nineties I was driving at about 95mph behind another car. It seemed like most people drove like that in those days, and there are no points accumulated for fines overseas. To cut a long story short we were pulled over and the bloke in front was booked while I waited. After a brief conversation about reasons for speeding, safety etc, after he looked at my licence the conversation went like this.

“It’s not fair that I just booked that man for a lot of money and you get off is it sir?”

“We can’t trust them to pay their fines sir.”

“I don’t understand, you just fine me and I pay.”

“No sir, it doesn’t work that way sir. We detain them until the first day of sitting. It is Friday and the next day of sitting is Monday. That’s not so funny now is it sir?”

So from a position of great confidence one can be reduced very quickly. In this instance he let me off after he had his little bit of fun but not the hills. Rising out of Canberra it felt like my feet were melting. To stop the kayak from jerking you take some of the load with your arms. First you put them behind and hold the harness frame, then they get tired so you hold it at your side until your arms cramp up, then they go to the back again. About that time a knee will falter, your back hurts and then the pain in your feet chimes in. After about a dozen of these cycles you start to dream about the top of the hill.

The top at last, you speed up, the pain disappears (except the feet) and you are on a role. Then there is the descent and the knees complain, the back voices its concern and it’s time to stop for a drink.

And so it went for 22km until I called it a day. Not a lot, but at least it is a start. Hoody turned up an hour later with my ute so here I am beside the road, one beer down and a can of Irish stew giving me a belly ache. There are large blisters on my heels and my runners have been destroyed by the heat and the load. 22/8000 ths completed. 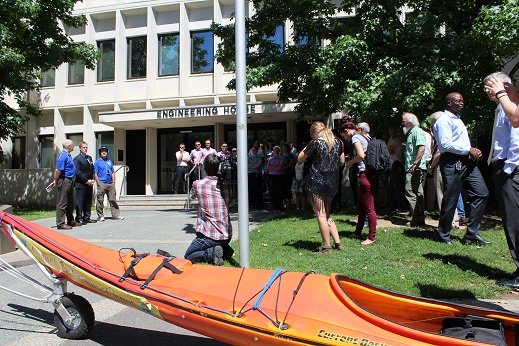 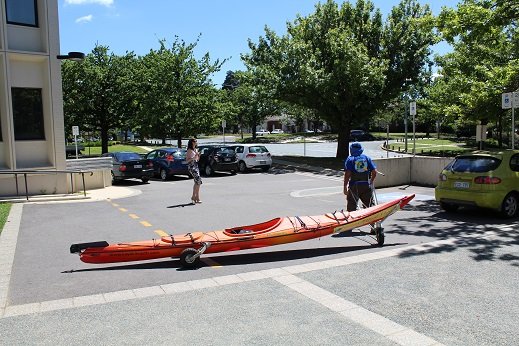 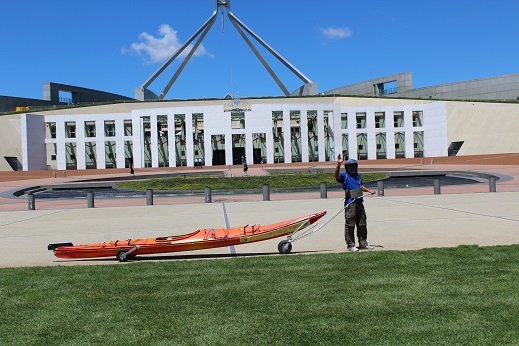 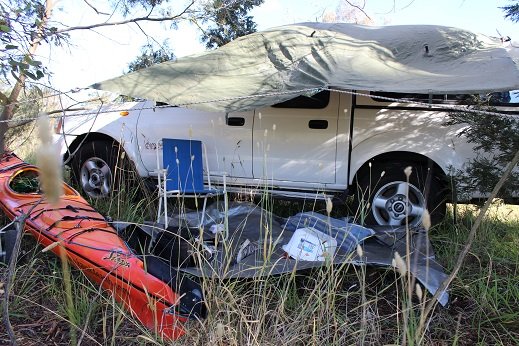 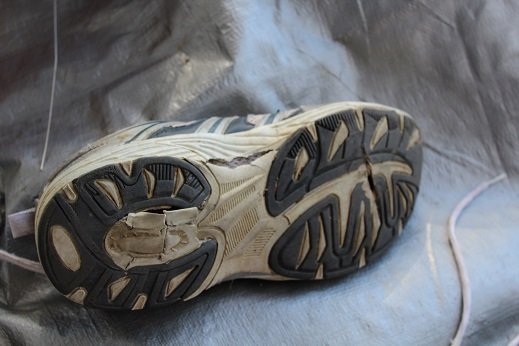 Sunburnt banana that was on the kayak seat 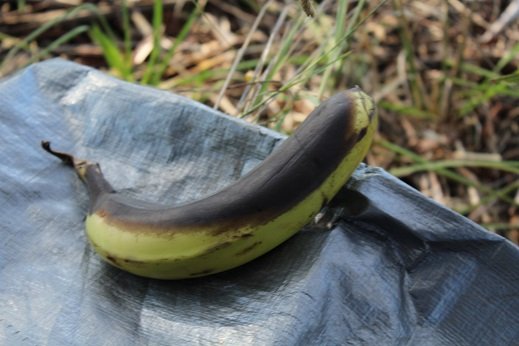